History is where the greatest stories are found. There is drama, surprise, horror, romance and suspense in the events of the past. The number of subjects that can be explored is limitless and the subject of Abraham Lincoln, is rich with potential and has been mined deeply in the past. Biographical pictures can sometimes introduce us to characters that we have barely any knowledge of, or they can celebrate those we know well in a grandiose manner. What it takes to make a successful movie out of those bits and pieces of history is a great storyteller. Over the last forty years, there has been no greater cinematic storyteller than Steven Spielberg. From "Jaws", to "War Horse", Spielberg has usually managed to tell us compelling stories that are highly visual in nature and they touch our hearts. This film should have been the perfect combination of subject, story and film maker. While the story is intelligent and thoughtfully told, in the end for me, it was more hollow then it should have been.

Otto Von Bismark, said more than a century ago that "laws are like sausages, it is best not to see them being made." The story of the passage of the 13th Amendment is the real focus here. Although that passage was accomplished through the cleverness and political acumen of our 16th President, it is still a legislative process with multiple characters whose motives are mixed. Way back in 1972, a stage musical was transferred to film on the passing of the Declaration of Independence. "1776" was an interesting movie, but not a popular success and even with songs, the legislative process is a slog. Aaron Sorkin has written brilliant stories about the political process of legislation both on television (The West Wing) and in movies (The American President, Charlie Wilson's War), but he had the advantage of plugging clever word play into the mouths of fast talking characters. Tony Kushner, the screenwriter for this film, had a more difficult task. He had to find a narrative that would put many of Lincoln's own words into this story, he had to invent words for all the other characters, and he had to stay true to the political speech of the times. As a result, we often get great stories told by the President, forced into meetings that might not have made the most sense for them to be used in. During the first half of the movie, every scene with Lincoln has one of those charming stories. While the homespun wisdom of Lincoln feels accurate to the character, it also feels shoe horned into the narrative.

A complete Lincoln biopic may not have been necessary, and I understand the need to focus the story a bit. Yet by cramming it into the short window of the lame duck congress that ultimately moved the legislation forward, the emphasis stays off of the President too much of the time. This may have been Lincoln's last great success as President, but from a story perspective, it lacks the kind of drama the Emancipation Proclamation presented. Having read and loved "Team of Rivals", the book that Spielberg and company largely based their story on, I can say that it was the proclamation that represented the more interesting dilemma Lincoln faced, and it was a more natural story to focus on. There is one sequence here where Lincoln gives voice to the whole process of the decision that he used in issuing the Emancipation Proclamation.  It was a more interesting five minutes of mid 19th century politics and law than most of the histrionic speechifying done in the Congress in support of the 13th Amendment in this film. The backroom deals and political payoffs and the political divisions in the Republican Party at the time, are shown clearly but just not made very interesting. Instead of being a living breathing embodiment of Lincoln's political skills, it feel more like a tableaux of Lincoln, during the process. This film is a history lesson not a drama. I like history but it may be difficult to embrace it without the narrative it needs.

There is so much right in the film that it is difficult to pinpoint those elements that ultimately undermine it. Daniel Day Lewis, is spot on perfect as Lincoln. From what I have read of his speeches and the history around them, his voice is probably closer to the real voice of Abraham Lincoln than the sonorous tones of Royal Dano, who provides the voice of Lincoln at Disneyland and Disney World. Day-Lewis manages to stand tall even with the bowed shoulders of Lincoln. His face looks gnarled and worn in the job. His movements display the real movements of a man who is tired and carries the weight of both the world and his young son on his shoulders. (Just watch how Tad climbs up on father Abe in the sequence in front of the fire, it seems like something a man of that time would do with a child). The only weaknesses in the performance come from the tense confrontations he has with his wife, played by Sally Field. In those scenes he seems to be straining for drama rather than interacting with his wife. Sally Field is actually more subtle in the two "fight" sequences.  When he is telling the stories that Lincoln told so often, he is a natural. When he explains his positions to the cabinet and his political allies, Day Lewis feels authentic. He is robbed of greatness sometimes by the way the script forces the stories into the narrative. The opening sequence tries to cheat the Gettysburg Address into the time period of the story, by having soldiers repeat the lines back to the President who had said them almost two years earlier. We get a great version of Daniel Day Lewis doing the Second Inaugural address, but it is done as a benediction after the President has been assassinated. Too often, great moments are being imposed on the story that the filmmaker chose to tell, and the stitching is too obvious. 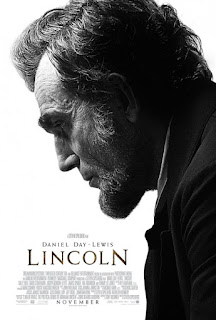 The movie is filled with great moments and terrific actors. Behind every beard or costume was a performer doing some darn fine work. The technical elements of the movie are also superb. The visuals are right, the sets impressive, the cinematography is excellent. I did not notice John William's score, which is both a blessing and a curse. We get a more natural story when the events are not always being sweetened by the music, but the parts of the story that touched me usually had music to them. Not the music of the score but songs of the times, sung by soldiers and by the congressmen. In the final analysis, I admire the movie a great deal, and I was moved by some of the bits and pieces. "Lincoln" is not a work to be ashamed of, but it is not a work of art, and the biggest failing for me, who reveres Abraham Lincoln above all other American Heroes, is that it is also not a work of heart.
Posted by Richard Kirkham at 6:30 PM

"laws are like sausages, it is best not to see them being made."

HAHAHAH!!! That is awesome. And perfect for this flick. LOL

I agree that this wasn't the biopic that was advertised, or that we'd expect from the name,but I still found it to be a very solid piece of entertainment. May not have been GREAT, but its definitely very very good.

I see your points though, Rich.

I hope it was clear that I admire the film, it simply isn't what I hoped for but it is far better than most.