Denzel Washington has played dicks before. He won an Academy Award for playing a huge monster of a human being in "Training Day". So in a way he is returning to familiar territory here. His character is a hero, like Captain Sully from a few years ago, who landed a plane on the Hudson river and saved everyone's life. This story is premised on a different scenario. The captain does an unimaginably heroic landing, but he is also a deeply flawed person. The crux of the tale is not that the accident was managed as well as it was, but that the Captain cannot manage his own life half as well as a severely damaged plane diving for the ground at six hundred miles an hour. That my friends is a screwed up life and it is really what the movie is all about.

Captain Whip Whitaker is an alcoholic. I try to avoid spoilers in these reviews, but I can't think of a way to write about this without discussing the main plot engine in some detail. His drinking and drug use have no real impact on the events of the plane crash. In fact, it is the opposite that happens. The crash forces him to consider the toll that his behavior is taking on everyone else but most especially on himself. Actors love to play parts like this because it gives them a chance to stretch some important acting muscles. Denzel gets to be intoxicated, belligerent, self righteous and thoughtful all within moments of each emotion. He has to be good for us to accept that he is a real person and not just someone play acting for us. In the long run, Denzel is a good actor, so he is convincing and gets to have a pretty good story arc.

The fact that the actor is good however, does not make it easy to put up with the reckless self destructive Captain Whitaker. Any one with a drug addict, alcoholic, or philanderer in their life will understand this. Whip is given multiple opportunities to turn things around. Friends come to his aid, a supportive fellow addict drops into his life, and the fates seem to conspire to give him a lift out of his screwed up life. At each turn, he makes the wrong choice. Look, millions of people enjoy a cocktail without ever having a problem, but when some one does have a problem, it is lights out. I never want to be in these situations and have to face the troubling image in the mirror and ask, what have I become? That is what Whip Whitaker has to do, and it is a frustratingly ugly sight. There were a couple of sequences which seemed to mock religious faith as a way to lead ones life. When all is said and done however, it seems that the hand of God is needed to put things into place.

The first half hour of the movie includes the lead up to and the actual crash of the plane. It is a harrowing experience and as close to an actual air crash as any of us will ever hope to be. From a technical point of view, this part of the movie is flawless. Robert Zemekis, the director, previously traveled this path with "Cast Away" and Tom Hanks living through a plane crash but being trapped on an island. In essence, this film is a remake. Alcoholism is the island, recovery is the rescue and the girlfriend addict is Wilson the volleyball. There are other characters in the picture but they are also just stand ins for the obstacles that our protagonist has to overcome. Don Cheadle played Denzel's deadly funny friend "Mouse" in "The Devil in a Blue Dress" nearly fifteen years ago. They are reunited in this picture and are again good counterparts, although Cheadle feels a little underused here. Bruce Greenwood as the old friend and pilot's union representative, is the fire on the island that sustains Denzel's character, but delays him in making the decision he must ultimately confront. John Goodman appears and just adds energy to the movie. 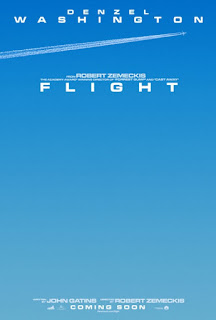 As much as they might need each other for help, addicts also threaten each other with relapse. We have what little caring for Whip as we do, because of his entanglement with a woman facing some of the same issues he faces. Their meeting and subsequent relationship is a result of another addiction, nicotine. This addiction is so strong that even a dying cancer patient they encounter, can't provide enough warning to wake Whip up. Listening to their dialogue sometimes feels theatrical, but the cruel things that are said in pitiful self righteousness are exactly the kinds of aggressive counterattack that addicts use to deflect from themselves. The movie is sometimes a little hamfisted with the story, but it still feels real for the most part. The actors are top notch and although it is not always pleasant to watch, it is well done and well worth a look.

Posted by Richard Kirkham at 5:52 PM