The producers of this film included a quote from Pulitzer Prize winning Playwright and Screenwriter David Mamet. The comment basically says there are only 4 perfect movies: The Godfather, A Place in the Sun, Dodsworth and Galaxy Quest. On that last one, I am certainly inclined to agree. This throw away movie that was sold as a kids film for the Christmas holidays is so much better than it has any right to be. For the twenty years since it was initially released, "Galaxy Quest" has grown in stature and seems to be beloved by millions who may have missed it on it's first release.

This documentary traces the development of the movie and the twists and turns it took to become a cultural touchstone. This comes from a fan driven group and that makes perfect sense because "Galaxy Quest" is a love letter to fandom and it may well have cleared the path to widespread acceptance of geek culture in the broader population. "The Big Bang Theory" and the "MCU" would not have nearly the resonance they do if Galaxy Quest had not blazed the trail for them.

Like many documentaries, the movie is loaded with talking heads who recall the events and personalities that are part of the story. Every major surviving cast member is included in the conversations. Sigourney Weaver is effusive in he love for the project and how it allowed her to play a comedic role that she sees as a lot closer to her true persona than the iconic character of Ripley really is. Sam Rockwell was almost unknown when he took the part, after having turned it down several times. He reasoned that it might be a good piece of counter-programming to show his range as "The Green Mile" was coming out around the same time. Tim Allen  probably had his finest role as an actor playing the William Shatner inspired lead character.

The Producer, screenwriter, director, casting director, production designer, editor and composer all have stories to share about the film and many of them are hysterical. The movie is generously supplied with clips from Galaxy Quest itself, along with Star Trek moments and a variety of other material. There is also an elaborate thread about the fans of Galaxy Quest, and the documentary trails a couple of fans who cosplay their way across the universe in salute to this pitch perfect film. We get a chance to see how fans become part of the story and how they were the original inspiration for the film in the first place.

The climax of the film brings the fans and the makers of the movie together at a celebratory screening of the film. It just so happens that I was at that screening along with my wife, daughter and my Southern California blogging colleague Michael, who brought his daughter the the screening as well. I covered the showing two years ago with some more details. Last night when we saw the documentary, we were delighted to note that we make a guest star appearance in the film. Amanda's Jaws shirt and my Hawaiian style blue shirt are clearly visible in the crowd scenes as the Thermains arrived for the screening of the film. I have been a long time fan of Galaxy Quest, I took the whole family as our Christmas day movie in 1999. One of the things I remember speaking to them all about was that the aspect ration of the film changed three times in the movie. It was nice to hear that confirmed by the director, since the DVD presentation does not always allow you to notice that change. 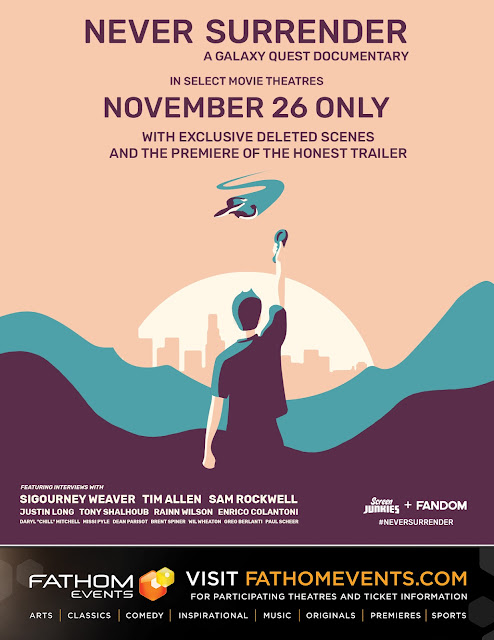 I'm not one to disagree with David Mamet. I think he is certainly right when he includes this movie on a list of perfect films. In fact I did the same thing six years ago on a post I entitled "Three Perfect Movies". If you check it out you will see I was with Mamet on this one early on. The documentary was accompanied by a long introduction from the Fandom group that put it together. If it is ever available to people on line or in physical form, I hope they will include the interactions of the writers for the site and the "Honest Trailer" they put together for the film. They were quite entertaining as well.
Posted by Richard Kirkham at 1:04 PM