Thirty-five years ago, someone created a sequel to a Stanley Kubrick film, using material from the original author of the piece. It seemed foolish to try to ride the tailcoats of Kubrick's Masterpiece "2001: A Space Odyssey", but "2010: The Year We Make Contact" was not a disaster and it did make a little money. Well, writer/director Mike Flanagan has attempted the same feat. Kubrick's "The Shining" had a sequel written for it by original author Stephen King, and that story has been adapted to make this sequel almost forty years later.

"Doctor Sleep" is substantially different in tone from "The Shining". The single location of the first film made it feel like a Gothic haunted house story, although there are many elements of the "shine" that are present. King was famously dissatisfied with the Kubrick approach. While I never read the novel, I suspect his unhappiness stemmed from the minimal relationship of the psychic ability of Danny Torrance to the film story. That may in fact be why King returned to the characters, so that he could elaborate on the mystery of "Shining" and not simply be trapped in the haunted hotel.

This story does start off at the time of the original events, and there are a couple of moments recreated for the prologue, but we quickly move forward thirty years to Danny Torrance as an adult. He is a troubled man who has been haunted by the spirit of the house that he feels has pursued him over the years. Ewan McGregor plays the adult Danny and he wanders aimlessly until another spirit visits him and he commits to a fresh start with new friends and no chemical solutions to his anxiety. As his story is playing out we are introduced to a new group of people who seem to thrive on those that shine. At first it is unclear whether they are spirits or something else. Ultimately, this group of wanderers lead by the magnetic Rebecca Ferguson, turns out to be the antagonists in a deadly hunt of those who can "shine" and those who use the shiners for their own purposes. It's basically a vampire story with creatures that are human but who have supernatural abilities. It certainly is a horror story, but it is not the slow burn descent into madness that the original focused on.

The strengths of the story ,as told in the film, are first and foremost McGregor, who has to be desperate, sometime despicable and ultimately re-deemed. The character is strongest in the scenes where he is working as an orderly in a hospice, and conversing with those who are soon making the trip to the other side. He develops the sympathy and heroic nature that he will need when the story leads him to direct confrontation. Cliff Curtis, a familiar supporting actor and welcome presence helps steady Danny in the road to empowering his Shining Skills. Inevitably there is a figure that brings the two sides into conflict. I won't spoil the horror for you but suffice it to say, it involves children, and that is introduced as a theme early on but taken to it's most horrifying place mid-way through the film. 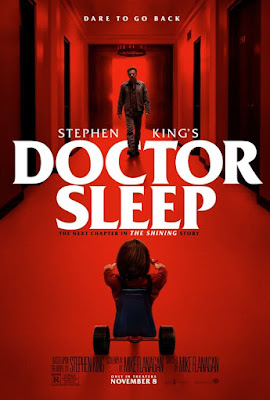 Modern film techniques allow directors to do things that seem physically impossible. The CGI moments remind us of that impossibility. That is one of the reasons that practical effects are so important, because they tie a sense of reality to the impossible. Two sequences in the film took be out of the story a bit because of the computer work. One involves a young girl rotating a house and levitating, this was preceded by an episode with spoons years earlier. Both of these moments would have worked more in a frightening way if they had more practical elements to them. "Shining" moments are less problematic because we are in a fantasy world at that point so the lack of reality is less egregious.

Just like how 2010 took the metaphysical world of it's predecessor and moved it into a traditional political conflict, Flanagan  and King take the supernatural horror from the first story and turn it into an action story, and it works. There are moments of horror in this film that are shocking for sure but it will be most noted for the game playing being done by two sides that we get to understand pretty well. It feels like an adaption of a complex universe that has been created in a book, and I think it is largely successful at turning that material into something cinematic.
Posted by Richard Kirkham at 6:08 PM