End of the Year Wrap Up 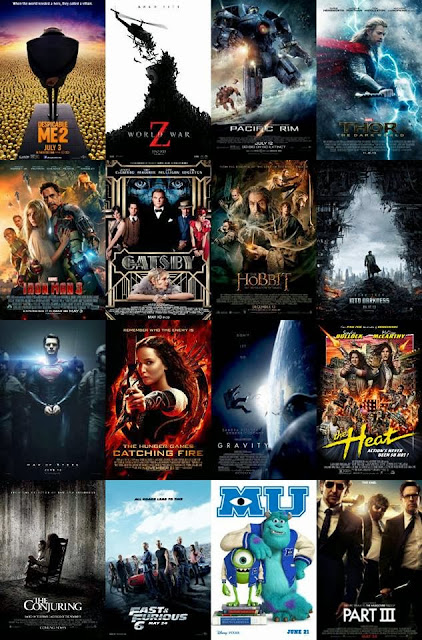 This year was certainly better than last year when it came to the diversity of quality films. I still worry that I see too many sequels and comic book based movies but I have to say there were several that I enjoyed quite a bit. When I get to the traditional top ten list later, I was surprised to see that there were no animated films near the top. Last year I had two and in 2010 I had three. Monsters University was as close as I could come and it was not that close. Also missing from my list will be a few surprises. I love Star Trek, but "Into Darkness" just missed the list. "Man of Steel" was one of my most highly anticipated films of 2013, and the more I think about it, the lower it drops in my esteem. "The Wolf of Wall Street" was not just a disappointment to me, it kinda ticked me off. Before I pass out my accolades to the movies of the last year, I want to comment a bit on my own blogging efforts.

I try to look at a variety of blog pages from people that I have encountered on line. I visit Keith and the Movies,  The Cinematic Katzenjammer, It Rains...You Get Wet, and Every 70s Movie on a daily basis. Several other bloggers also are worth visiting, I just don' always have time every day, they include Morgan on Media, Citizen Charlie, And So It Begins, and Scopophilia Movies of the 60s, 70s,80s. Two of my favorite blogs however are not daily blogs, My Movies My Words is a project by a writer on the other side of the country and I enjoy Eric's take on films but he posts when he can rather than on a regular schedule. Finally, Fogs Movie Reviews has discontinued publishing but Dan still has two years worth of posts that you can go back though and enjoy.  Many of these sites are more prolific than I could ever hope to be and some of the writers have a way with words and insights that frankly intimidate me a bit. I am however happy with what I manage to produce and by way of narcissistic-ally looking back over the year I producede this inventory.

I did some kind of post on all 89 trips to a movie theater that I made this year. That was a lot of AMC Stubbs reward points but also a lot of money spent.

69 New features released this year
11 Classics seen on the big screen years after their first appearance in theaters.
9 VLOG posts on the companion site
41 Posts that are not strictly reviews this includes blogathon reviews, MIWETS on Fogs and My page, and assorted commentaries on movie related issues.
341 Different films watched during the year. At least forty of those were watched a second time so I definately averaged more than a movie a day, even if I did not post on all of them.

Not a top ten list but some of the Reviews or Commentaries I most enjoyed writing this year:

Ten Favorite Moments from 2012  A countdown of favorite moments from films in 2012, most of these moments lasted thirty seconds or less. It was fun to put together but the video quote from Piranha 3DD is missing because the film was taken down (Probably by my own daughters company).

Shelby: Josh cut off his penis because something came out of my vagina.

Kirkham A Movie A Year  A quick visual trip though my 55 years on the planet.


King Kong Times 3  A personal reflection on the three versions of the story of the Eighth Wonder of the World.

Three Perfect Movies   Do yourself a favor and watch any of these gems that not everyone is aware of. If I ever need to cheer myself up, I put in one of these 3 movies and I am happy again almost immediately.

Happy Birthday Strother Martin A salute to one of the great character actors of all time, and a man that I knew slightly because he was related to me. (Visual Proof Included)

The Adventures of Robin Hood on the 75th Anniversary of its release. This is the original post and it still has the video links that were not copied to the Favorite film page.

Top Ten 007 Movie Posters  I was inspired by Eric from "My Movies, My Words" and then was re-blogged by Michael at "It Rains ...You Get Wet." Another chance to talk about one of my favorite subjects, Bond, James Bond.

Drew: The Man Behind the Poster  This may have been the film going highlight of the year. I got to meet the subject of the film and have a short conversation with both he and the director. Look for the movie either on DVD or Streaming, a fascinating look at a real artistic genius.

CK Secret Santa Blog a Thon  My secret Santa gave me a terrific classic to post on. If you go to the link there is also a link to the Cinematic Katzenjammer site that compiles all the secret Santa Reviews. 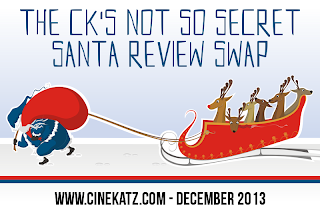 Movies I Want Everyone to See  I was privileged to write for Fogs Movie Reviews for almost five months. This is the review I did for my wife's favorite movie and one of the things I'm most proud of writing for that now closed site. 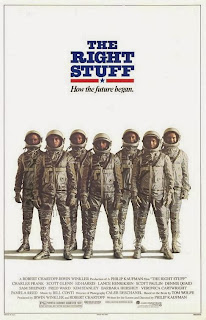 Next Up, the Traditional Top Ten List. Check back soon, it should be up sometime on January 1, 2014.

Posted by Richard Kirkham at 11:10 PM

I had fun, I hope everyone who visited did as well. Looking forward to the new year and adding a couple of projects as we go along. Thanks for being so consistent about visiting, I look at your comments and know at least someone is reading. I'll see you on the net.