This movie has apparently been sitting on a shelf for a year or so, and there were not a lot of ads or promotions for it. I guess the studio decided that their investment could not be recovered and they are protecting themselves by releasing it as counter-programing during the holidays and offering only a small amount of release support.  That's a business decision, and the investors have to go with their guts. I think the movie may have been tainted by some of those actions because it was much better than I was expecting it to be.

A little palate cleansing is nice at this time of year. I just saw six new releases of end of the year Oscar bait and Holiday cash in fare. I've been a little overwhelmed and I looked forward to something fairly mindless and action oriented, and here sat "47 Ronin" starring Keanu Reeves on my doorstep. The trailer was not promising, it emphasizes the CGI 3-D hooks of the movie. Fortunately, there is less of that element than might be expected. There are still dragons and ogres and mystical warriors, but the vast majority of the plot seems to be standard samurai action and setting.

Mr. Reeves is often criticized for his acting skills but I have found him acceptable most of the time if he is cast well.  There are not long passages of dialogue for him to spout. The exposition is done in an opening narration and through the voices of other characters. There was only one sequence where Keanu delivers lines that are portentous and even in that spot the sentences are short and to the point. If your objection is to Keanu in a love story set in the Samurai world, don't worry, that is only a small element of what takes place. In truth his character Kai is more of a co-starring role rather than lead. He is an important character, but the story is not about his journey, he is simply one of those acting to avenge their master and restore balance to the world as they see it.

The events are steeped in mysticism but are based on a real event that has been retold and embellished and changed over the years.  The actions of the warriors appear to be in keeping with the code that they lived by and this movie takes pains to emphasize that. There are frequent ceremonial rituals that are engaged in, and clothes that are associated with families and levels of service. The obligations that the ronin feel are explained by their leader and illustrated by their actions. This was one of the aspects of the movie that made it so much more appealing to me. There are several action scenes and the magical/supernatural elements do appeal to a broader audience in modern cinema, but I think this could have been effectively told without all of those components.

A couple of examples of elements that feel overdone; when the lead retainer, Ôishi seeks the banished Kai, he ends up in the set from the third "Pirates of the Caribbean". It feels strange and it is a sequence that is used to partially explain  why Keanu Reeves is not Japanese. In that sequence Kai is battling what appears to be a demonic ogre and it is a CGI creation. A traditional fight would serve the story just as well but the 3-D needs to have some weapons fly off the screen and the leaps and jumps need to be made fitting for a jaded audience. I was still entertained but I would have been just as pleased with a straight drama. 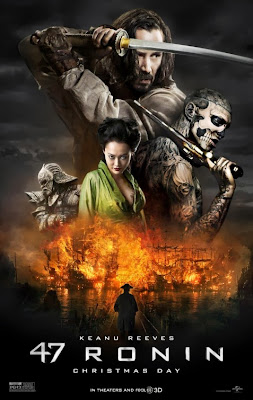 In the long run it was not great but it was good and I was entertained more than I expected to be. I hope that if you are interested you will take the time to see it in a theater. There are other films out there but if you are seeking mainstream entertainment and a entertaining action film, this is your best choice for the holiday period.
Posted by Richard Kirkham at 4:57 PM