I will admit up front that I have never read a Tom Clancy novel. They were ubiquitous accessories in the times that I lived through. Almost everyone I knew carried a copy of one of the Jack Ryan books and thumbed through them at bus stops, in waiting areas of restaurants, any place where time was to be passed and long before the internet was available for us to kill that time with. Next to Stephen King, Clancy defined the world of popular fiction in the 1980s and 90s. When the first incarnation of Ryan arrived on screen in the form of "The Hunt for Red October" I was sold. This was a different kind of spy game and I thought the films did a good job making the stories work on screen. Jack Ryan was played over a twelve year period by three different actors and all of those movies worked to some degree or other. It has been twelve years now since this character was on screen and the reboot seems like it should work and we can look forward to some more of Dr. Ryan over the next dozen years.

It looks as though this is an original story rather than an adaptation of one of Clancy's works. The update, getting Ryan involved through a 9/11 epiphany seems completely realistic for the times. In the long run it may date the movie, but I still can watch "Red October" even though the Soviet Union is long  gone so maybe it won't matter. The helicopter accident that was mentioned in the 1990s films, becomes a part of an origins story for this movie. I liked the concept but the rapid time forward makes the focus less about Ryan and his character and more about the "evil plan" of the the moment. It is a convoluted attack on America, involving short selling of American bonds and a coordinated terror attack. It is fortuitous that the Russians have themselves rebooted to their cryptic and totalitarian ways. The current intransigence of Moscow makes this script a lot more believable in a time when most terror threats originate from the Islamic world of fundamentalist warriors.

Chris Pine is an up and coming star. He has a great look and he is capable of acting so if given a chance, the character may be sustainable for a period of time. The script here gives him some early opportunities to show us his chops, but once the plot kicks in, mostly it is action based yelling and jumping that will characterize his role. His best moments are trading lines with director and co-star Kenneth Brannagh. Each of their scenes together gives Pine an opportunity to play smart and to use body language and dialogue to tell the story. When we arrive at the climax of the attack, there is basically nothing to distinguish Ryan from all the other hard guy spies that we have seen in other movies. The motorcycle chase near the end makes very little sense except it keeps the star in the center of the action. 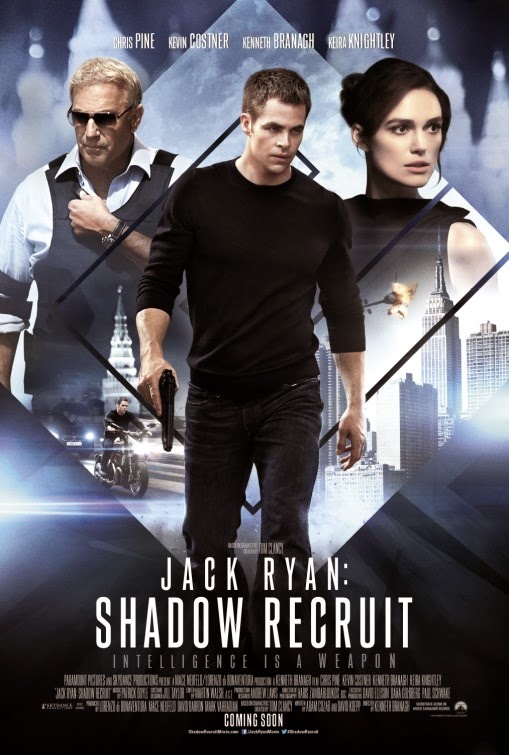 The director's greatest asset in my opinion is himself when playing the role of actor. Sometimes in a story like this, we are given a bad guy who has legendary skills but those are only talked about rather than displayed. Except for a perfunctory introduction to us as a bad ass character who kicks the crap out of a sloppy nurse, all of Brannagh's work here shows us his intelligence and dangerousness with skilled acting. Brannagh holds the screen with his face and his voice. He barely smiles even when it might be the right way to play off the covert agents he is up against. The traditional Russian accent is authentic enough without being reduced to a caricature of Boris Badenov. You can see menace and intelligence in his eyes. The script gives him a superfluous disease that is used only for a character point for Kiera Knightley's doctor to notice. His calm delivery of the dialogue involving the simple torture he plans for his captive is more disturbing because we are listening to a serious character and not just a bogey man.

Knightley is fine as Ryan's future wife, and the best joke in the film involves her discovery of his true job. Kevin Costner is solid in the role of recruiter and operator for the spying activities of the young Jack Ryan. He could easily have been cast in the role himself back in 1990. Had that happened it's likely that instead of two relaunches of the character, we would now be seeing some of the more mature Ryan stories that feature him in a position of political power. You can't rewrite history, so we will never know how things might have gone differently. "Shadow Recruit" is an effective action spy thriller, but it is not particularly special. The best thing about it is the performance from Kenneth Brannagh, but there is plenty of potential for long range development of the character, with some stronger plots. Generic but entertaining.

Good review, I hope it gets a sequel as it was solid.

It's worthy of more stories, but they need to get a little smarter. Thanks so much for sharing your views.

Nice review. I had some fun with this one. Really entertaining despite its simplicity. I could easily handle a few more of these.

Thanks for stopping by Keith, I enjoyed it but it should be stronger. The technical aspects are top of the mark. The second half is lazy but has plenty of action.