What Did I Do This Summer When Not At The Movies? 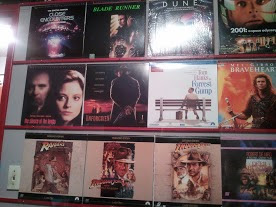 Laser Discs are an outmoded technology that never quite took off outside of the world of aficionados and tech geeks. They introduced many of the features that we now take for granted on a DVD or Blu Ray release. Such features would include a secondary audio track; either score, commentary or dubbing. Lasers also introduced Trailers, outtakes,  featurettes and a bucket load of other cool stuff. 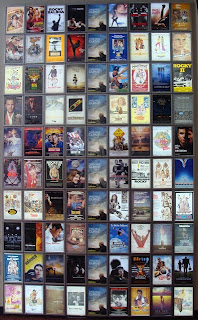 Last Year at the Archlight theater in Hollywood, they had a fifty foot high poster wall with a light box for all the 80s posters they were showing off. Then next time I was in they had a sports movie themed wall. At the other locations they have similar displays. I love this idea and am jealous that I don't have the space or money to reproduce it with my own poster collection. I do however have those a whole lot of discs and now I can create my own theme walls using the Laser Disc covers.

Laser Discs never managed to spread out in a wide enough pattern to make them more cost efficient. At most, 2% of American homes had laser players, I am among those two percent. I still have almost 800 discs that were previously stored in two magazine racks in my home office (along with two big tubs on the floor). I currently have three players that are not working so they really are not doing much for me except reminding me of all the money I spent. Still, most of the Discs that I bought had beautiful covers or gate-fold jackets and it is a shame not to be able to see them.

To fix this issue, I have borrowed an idea from one of the Laser Disc stores I used to haunt back in the early 1990s. "Laserwave" was located in San Gabriel, about a mile from where I lived and they sold and rented Discs, so I was in there on a weekly basis. I always loved the way they had them displayed on the walls. Much of their business was karaoke based, being in a large Asian community in Southern California, but the displays were all movies. They had a unique wall system that I always admired. The thin shelves were fronted with acetate edging to keep the discs from slipping off and the shelf above had an acetate edge to keep the disc from falling over. You simply insert the disc under the top lip and then drop the bottom behind the lip on the lower shelf. It was harder to get right than I thought and it took more time as a result.

Here is my humble attempt to copy both the Arclight and Laserwave: 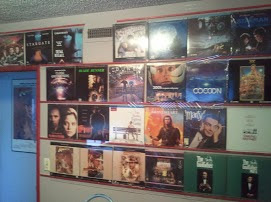 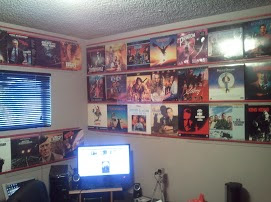 I anticipate being able to put up theme walls when I have all my discs sorted and the office back in working order, I'll try to shoot some of the KAMAD VLOG posts in front of the themes. Look for a horror wall in October, that will be the soonest I will have my stuff together.

By the way, if you have a collection of old LPs, this would be a great way to feature a large number instead of merely a few well chosen pieces of music art.

Unlike Siskel and Ebert, I don't have a balcony to close, so I'll just sign off and wish you happy celluloid dreams.
Posted by Richard Kirkham at 8:29 PM

Looks great Richard! I need to do something like his eventually.. Not sure what I'd use though. I remember when I was in college, I had just finished working at Blockbuster and had a ton of those cardboard little things that were used as placemarkers for the movies on the shelves. Lined my whole dorm room with them. Pretty cool, but the tape I used ruined them all.

Thanks Nick, Yeah I may be going through a second adolescence but I love the way these things look. I bet your dorm room was the hang on the floor.

This looks pretty damn cool but I would need a way that would make it easy to still watch em. You have a really good collection there.

Vern, they come right off the wall with a simple maneuver. You can watch any of them at any time and put up new ones in a couple of seconds.