Bullet to the Head

I saw a couple of sites that were hating on this film. I can't understand why they would despise it so much, unless they were expecting all the punchlines from the trailer that did not show up. Two weeks ago, Schwarzenegger returned to the action scene with a movie tailored to his age and cut to fit his style. Sly is doing pretty much the same thing here, only it looks like they cut down on the humor and built up the violence to make it work for his style. Arnold has always been a little bit of a cartoon, so some of the over the top gags were appropriate there, but Stallone is much more based in the real. His milieu has always been gritty. From Rocky to Rambo and a dozen others, Sly films have always hung around the edges rather than in the glamor. "Bullet to the Head" is pretty much a grim action feature that follows a standard pattern and provides a huge dose of violence. That's it, pretty much end of story.

Stallone did not write or direct this one like he did with the last of his Rambo, Rocky films and the first Expendables. He appears to be an actor for hire here and that means his input may have been somewhat limited. He does not exactly walk through the role, but there is nothing in this that feels the least bit personal to him. The movie was directed by the once great Walter Hill. He has had a hand in dozens of movies that I have loved, but he too appears to simply be working here not invested. The movie was competently shot, in focus and used standard modern film making techniques, but nothing about it stands out. Except for Stallone's age and the amount of blood on the screen, this could have rolled out in the highlight period of both their careers, the late 1980s.

Hill wrote the book on spinning the body cop formula off into new directions. In "48 Hours" the buddy was a con, sprung from jail to help on the case (it helped immeasurably that the con was Eddie Murphy in his breakout role). In "Red Heat" the buddy was a policeman from the Soviet Union, and the Austrian Oak adds charisma to Jim Bulushi as the American cop. Here, Stallone plays the odd man out. He is the criminal enforcer who teams up with an out of town Korean American cop in New Orleans. Sung Kang is an actor I did not recognize, but when I looked him up it turned out I'd seen him in three or four films. Unfortunately, the fact that I could not remember him is indicative of his presence in this movie. There is nothing in his character that was special or fun and there was even less in the performance. Like Sly, he's just here to earn a paycheck. He does his job but does nothing to lift the movie.

Stallone is 67 years old this year. His body is pumped up and the veins in his arms pop in that style of most committed body builders. His face looks like it has aged, but normally. There are no obvious signs of the plastic surgery that many older performers suffer from. When people warn youngsters about tattoos, they often visualize the tattoo on a sagging body and wrinkled torso. I don't think the tats he sports in the film are real, but you would have a hard time using his physique as a warning to the teens thinking about body art. I had no trouble seeing him as a still tough guy, even at that age. Late in the story he has a one on one fight with a much younger and I think bigger opponent, played by recent Conan star Jason Momoa. Their fight is still believable, or at least as believable as you are going to get when guys are facing off with axes. 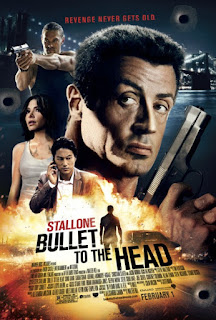 The axes actually reminded me of maybe the worst Stallone vehicle I ever saw, "Cobra". In that film, a cult of serial killers are after Stallone and there was a scene where they held axes in each hand and clanged them together like the thundersticks you might see at a baseball game. It was stupid there, and only slightly more real in the current film The ridiculous nature of the face off gets the one good joke in the movie as Sly's character wonders if he and his opponents are supposed to be vikings. That's about it for the jokes. I did appreciate the irreverent politically incorrect insults that his character throws at the Asian American cop. It's not that they were good, or funny, it's just that it seems like the way a person like his character would speak. It isn't cleaned up to avoid insulting anyone, it simply shows the mindset that his criminal lives in. If there was something in the movie other than Stallone to recommend it, I missed it. This is another one that is what you expect it to be. Not as entertaining as "the Last Stand", but very much a workable action flick for as couple of hours. I want Stallone to keep working, but if he makes more movies like this, his career will return to the icebox times of the early 2000s, and no body wants that.

Posted by Richard Kirkham at 8:02 PM

YOur review is spot on here, man. I dont know what people were expecting. It's Stallone, doing Stallone things. I liked it.

Hey Dan, Hope all the Stallone Fans go out and see it, and that he keeps working it out.