If you can get through the trailer without a tear in your eye, you might be able to make it through this movie dry eyed. I freely admit I could do neither. The story of one family's survival in the face of the 2004 Tsunami is truly moving and quite frightening to anyone who has a family that they love. The pain and hardship that all families effected by the disaster is hard to imagine. Visualizing it for us is a harsh reminder of all that was lost but also an inspiring story of hope and love. Once upon a time, disaster movies were all star affairs, where nightmares were invented. "Earthquake", "The Towering Inferno" etc. Getting through a fictionalized story with cardboard characters is an exciting vicarious experience. Watching a real family, even though portrayed by actors is nearly traumatizing.

In 2004, there was no YouTube and the clips of the tsunami were limited. Two years ago, in the Japanese event, the cameras were ubiquitous, and the clips on-line were numerous. The terrifying power of the ocean, rising across the vista, sweeping away all in it's path fascinated me. I spent hours watching in torment as I could see people and cars being swept away from helicopter shots overhead. This film brings us to the ground level and puts us in front of those waves with the endangered family. The sequence of the tsunami striking the resort where the family was vacationing is incredibly realistic. The vision of being pulled under and tossed about while objects bashed you or cut you or worse is something that the film makers have recreated with intimate reality. Because the focus is on one family, this does not feel much like an entertainment, but more like a well realized visual diary of their experience.

Naomi Watts plays the mother of this group, and she and the oldest son are the main focus. Her performance has been nominated for an Academy Award and it is understandable why she was singled out. She is strong and terrified all at once. The stunts and makeup must have been grueling, and it is hard to imagine the difficulty of being able to act in those contexts. Her performance is primarily in non-verbal expression of love and determination. Although she has dialogue, it is not the words that anyone will remember from her performance, it is the anguish of her scream as she clings to a tree. It is the breathless facial expression she gives to her son in the overcrowded and frustratingly chaotic hospital. The look of hopeful gratitude she conveys to everyone who helped her and her son is an expression that I imagine all of us would have when aid is offered to the desperate.

Ewan MacGreggor plays the anguished dad. He is also excellent but with far less screen time and a story that does not have the same traumatic physical action to it, I think he has been overlooked when passing out praise. I have to say however, that the real star of this film is the young actor Tom Holland, who portrays "Lucas" the oldest son. Much of the film rides on our ability to relate to the story through the eyes of a ten year old boy. His actions are heroic at times, and when there was selfishness, he made it seem like the natural reaction of a scared child. There are long periods of time where the camera lingers on his face and sagging shoulders. This is not a performance that is overly emotive. His tears come at appropriate moments and do not overwhelm the story. This is what a great child performance looks like. 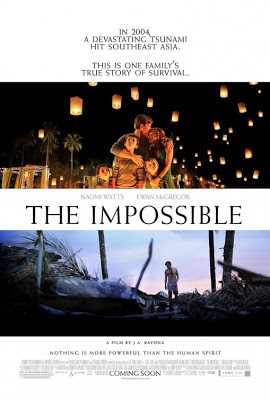 The other two children are also very good but they largely get by on the sweet faces and innocent manners of kids everywhere. Geraldine Chaplin turns up for one brief memorable scene and she gives the boy playing the middle son an opportunity to shine and make us care even more about this family. While the family is the center of the story, in the background we can see the story of thousands of others. The details are not delved into, but the difficulty is something we will be able to related to. This is a true horrifying story of survival. It did not need to be tweaked to bring the drama to home and change the label to "Inspired by True Events". That human beings of any type managed to crawl out of the debris left by this powerful event is amazing. That a family of five, including three small children, survived, got lost, and separated and found each other again is Impossible.
Posted by Richard Kirkham at 5:47 PM