Next time someone tells you everything is available on line, try to get them to find the original trailer for this movie. I looked all over the place and could not find it.
That doesn't mean that it doesn't exist, but I suspect that may be the case. Anyway, the above trailer is a mock-up that someone posted on youtube. You can tell it is not original because the music is from Silverado, which did not come out until ten years later.

Sometimes, you have to make due with what you have. I have this movie on a DVD that goes from a letterbox format for the credits to a pan and scan version for the rest of the film. This is really too bad because a lot of the pleasure in this movie are the vistas and wide-screen images of the contestants in this horse race.The scanning seems to take some of the grandeur and a lot of the energy out of the story, (at least as I remembered it.) 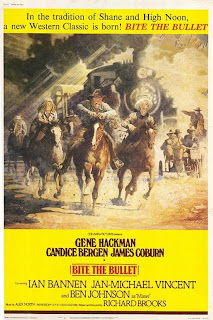 I saw this movie at the Chinese theater, on the big screen. Of course at the time there was only one screen at the Chinese Theater. There are actually quite a few westerns on my list, which is a little surprising since the 70's were supposed to be the death of the western. It so happens that this particular Western stars my favorite film actor Gene Hackman. I looked over his filmography, and for a guy who got started in the business in the late 60's, he has actually made a lot of Western Films. Earlier this week, we came across Zandy's Bride, which I had nearly forgotten and came out a year earlier. Gene Hackman was a big star at this point, he was cast as the leading man a couple of years earlier in "The Poseidon Adventure" but he has always been a character actor to me. When he plays a part, he is the charater he is playing not the star. In "Bite the Bullet" he is the first lead but really just one of a dozen characters that make up the story.

This film features a 700 mile horse race across deserts, over mountains and through forests. There are gunfights, action, dramatic twists and a sense of history as things go on. Hackman and James Couburn play two of Teddy Roosevelt's Rough Riders a few years after the Spanish-American War. The modern is mixed with the old west at a time when the world was in fact changing. Ben Johnson basically repeats his role as the last of a dying breed from the Last Picture Show. Candice Bergen is the female lead in a pretty solid part for a woman in a movie like this. This same month she was starring in "the Wind and the Lion", so it was pretty clear she was Box Office at this moment in time. There are other familiar faces as well, but I want to take special note that this was the period of time that Jan-Michael Vincent was ascending and he was very promising in the movie. It is a shame that drugs and alcohol sidelined a guy who could easily have taken over a lot of leading man roles in the next few years.

Opening the movie is a prologue that introduces several character, including the wealthy owner of the favored horse and the newspaper people that are sponcering the race. It was a little odd that there was so much time devoted to those story arcs and that they basically disappear from the movie. The only thing I felt was unsatisfying about the film was the last ten minutes of the race. The result was fine, but there is no resolution for some characters and it feels like an epilogue would have been appropriate. I recall that the film got a very fine review from the LA times when it opened; probably Charles Champlian wrote the review, he was the main critic at the Times in those days. This movie seems largely forgotten now, which is too bad because it is a good action film with some realistic situations and characters. It runs off the track a bit in the last act, but that can be forgiven pretty easily.