This was probably the most anticipated film of the summer for a lot of people. Because of the Pandemic shutdowns, it got pushed back three times before finally making it to theaters this week. Bu all means, see this movie if you are interested, in a theater. The scope, photography and action sequences will be diminished if you choose to see this on a tablet, TV screen or heaven forbid, on a phone.

I want to start with a message that is also a warning. If, during the course of this Two and a half hour film, you need to visit the restroom or concession stand, and you are worried you will miss something that clarifies the story or advances the plot in the time you are gone, go ahead and go. Nothing explained in any five minute sequence during the film, will help you keep track of what the hell is going on in this movie. "Inception", "Memento" and "Interstellar" all play with time and parallel events. If you ever had trouble following those concepts, which are reasonably well explained although still confusing at times, get ready to feel completely lost. For the first hour, things made sense and you could follow the logic of the world Christopher Nolan has created here. The premise is interesting and it contains the usual conundrums that time travel stories face. The problem is that about a third of the way into the film, two or three additional plot elements are introduced, each one with different time influences , and they all start influencing each other. Sometimes those effects are so complicated that a map would not help you. Events start moving faster and trying to keep up will be a waste of time if you are also trying to enjoy the movie.

There is nothing inherently wrong  in having a complicated plot, if at some point you can make sense of how it all comes together, "Tenet" attempts that but largely fails to be coherent, even though several of the twists involve tricks you have seen a hundred times before in a time travel story. Ultimately, I think you can view this film as one loop in an event that has a limitless number of possible variations. Doing that will not make the story more satisfying however. I would have to see the movie several more times to pick out the inconsistencies and  conundrums that pop up, but to be honest, Nolan himself doesn't seem to care about them. He even has one of the characters say as much, fairly early in the film. Stop trying to make sense, let's just let this wash over us. I can live with that, but it will leave Tenet as an exercise in style and film making, rather than a piece of cinematic art.

With a pre-title sequence that feels a lot like a Bond film, Nolan sets this up as an espionage story, that potentially would be confusing the way some double and triple cross stories can be, but it would still be grounded. As the science fiction element takes center stage, the tradition spy tropes get doubled back on with a wink and a nod to time travel twists we have seen before. I won't spoil it for you, but during a heist scene, one character confronts another and we don't see the second characters face in that sequence. You know that will play out again, and there will be a reveal.,,guess what's coming.

John David Washington has just enough charisma to play the low key "Protagonist" of the story. The scene that shows off the potential of what might have been a solid spy film, involves his lunch with Michael Caine. It is not his fighting skill, or dramatic intensity that makes the scene work, rather, it is his bemused self confidence in the face of being judged by others. One place I don't think he was quite successful at was the near romantic element of his relationship with the character played by actress Elizabeth Debicki. I can buy that he feels a sense of responsibility for her in a paternalistic way, but the embers of romance that are supposed to be the base of this are not there.  He can sell that he cares, what is not clear is why he cares.

We get a pretty good preview of what the next Batman movie will be like because Robert Pattinson, plays a much more active Felix Leiter to Washington's 007. I suspect, that as in most of the good Batman films, the quirky Bruce Wayne will not take a back seat to the brooding "Dark Knight". Pattinson plays Neil, the mysterious counterpart to the Protagonist, and he has a light touch with the humor and enough presenter to sell the physicality.

You ready for a surprise? The actor who steals the movie is Kenneth Branagh. Taking the start he made on a similar character in the Jack Ryan film from a few years ago, Branagh manages to make a cartoon villain feel dangerously real. A kingpin of a Russian oligarch, it would be easy to just say the lines and have threats come off as empty bravado. Nolan gives Branagh actions to play that show us his ruthlessness, the actor adds a sense of menace to those lines, but never with the charm of a fictional character. Instead, the deadly earnestness of his performance is disturbingly real. The tiniest touch of humanity right at the end of the film paints just enough of a persona to make the character evn more real, and loathsome.

Filmed in some of the most beautiful locales in the world, it would be hard to fault the look of the picture. The movie is not overcut in the action scenes, but the parallel time tracks and reverse structure do require some frequent cuts in perspective that can get a bit confusing at times. The backward car chase sequence looks great, but when it is followed up on, instead of being clearer, it leads us to start questioning what we really saw before, but not in the good way that it is supposed to work.

At two and a half hours, despite a solid pace, the film feels long. Probably because of the plot conceit concerning inverted time elements. I loved "Memento" but it was less than two hours and the same kind of thing happens there. Adding another forty minutes to it would do to it what happens with "Tenet", it makes you look at your watch and wonder how much longer it is going to go on.  Maybe when it is serialized as a four hour mini-series, it will work better. 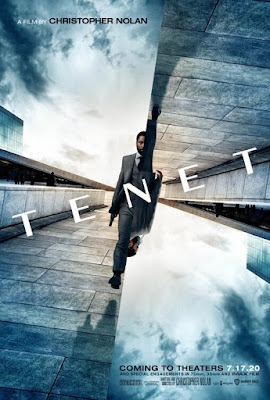 Christopher Nolan has one of the greatest imaginations in the film industry. There are terrific concepts in most of the movies he has made. There are simply too many times that we ravel on a tangent that takes up a chunk of time but might have been replaced with something simpler as just as easy to admire. The stacking Russian Doll story structure worked well in "Dunkirk", it was clever in "Inception", but it is simply overdoing it in this movie.

I probably sound like I am down on the film, I'm not really. I enjoyed it quite a bit. Pattinson and Washington invading a penthouse in India, or doing a heist at an airport freeport, were well staged action scenes. The inverted battle at the climax of the movie was spectacular to look at but mostly incomprehensible. The inverted stories are fine but when you start to retcon your own movie to change the outcomes, you create dilemmas that Solomon could not work out and algorithms that might give Einstein fits. See the movie, go with what is happening on the screen at any point and don't try to make it make sense. That extra brainwork will distract from the moment, and it is the moments that make this movie worth seeing, not the plot.
Posted by Richard Kirkham at 9:43 AM

Hey Richard! I read your review after I finished mine. I think we're generally in agreement. I actually didn't find the film overly long even though I spent much of the time in a state of confusion, ahah. There are lots to appreciate here but yeah, it's really too much of a puzzle than a solid narrative film. I do love JD Washington and Pattinson together, they made it more watchable!

Ruth, glad you enjoyed it but sorry that like me, you frequently were befuddled. I have no doubt it will make sense if all plotted out and laid down in front of us, but too many things happen too fast to do that while watching. The teaming of Pattinson and Washington was great, I wish there was a spy film without the science fiction elements for them to steam on.