So 29 years after our last dose of Bill and Ted, we get a sequel that is not needed for the story to feel complete, but feels like it is needed in these times. The world seems like it is a mess. Covid, violent protests, Political Division, and natural disasters galore. The whole planet could use a break and a movie like this fits the circumstances nicely. There is no agenda here, the closest the story comes to reflecting our times is the notion that reality as we know it is being threatened. Forget that silly coincidence and let the stupidity flow over you like a warm stream from a hot shower. The only way you will be changed by this is that you will have a slight smile on your face, and no memory of the world outside for 90 minutes. That is a reasonable respite for these times.
While Bill and Ted have aged physically in the story, their emotional growth is static. The two of them are joined at the hip, skimming through life, having missed the chance to turn their immense popularity at the end of the last film into something lasting. The problem may be expectations. Since they know that the future has been influenced by their work, they appear to have been chasing the dream of writing a song that will unify the world and bring balance. We all know how hard it is to fall asleep when we want to rather than when we need to. Nothing will keep you awake as much as thinking about how important it is for you to get to sleep. Well apply the same principle to just about anything else and it will be true there as well. In an effort to fulfill their potential, they have alienated their audience, isolated their life experience and generally grown less relevant. For the first twenty minutes of the movie, I felt that the characters and script were suffering from the same problem. The movie wants to be fun, but it takes a long time to set up the story, and by exaggerating some of the character traits by genetically passing them on, the screenwriters seem to be suffering from the same hubris.
Once the set up is out of the way, the movie feels a lot more easy/breezy and the dofuss fun begins. Creatively, there is not much here. As in the first film, historical figures are being collected, but this time for a band rather than a history project. Also, as in the second film, we return to Hell and have to figure out how to escape the afterlife. The return of William Sadler as Death is the most welcome call back to the previous films. The storyline of estranged bandmates coming back together is one of the few organic elements of the film that fits. Some other side plots such as the counseling session with their wives, the two princesses rescued from the first  and second movies, may amuse but don't connect well to the main story. If you thought Bill and Ted were deficient in IQ points back in 1989, it appears that there is no recessive gene, because the two daughters are even more vacuous. There were a few cute points about their similarities to the dads but combined with the story points, it does feel a bit like they are simply repeating themselves.
Alex Winter and Keanu Reeves don't seem to have changed all that much. They are in on the joke and play it straight for us. Other returning characters seem to be there simply to show that the world we are seeing is an outgrowth of the previous films. Ted's Dad, the boy's Step Mother Missy, and the Joanna and Elizabeth, the wives/princesses, don't do much for the story except provide continuity. I can't decide if Dennis Caleb McCoy, the robot sent to kill Bill and Ted is more amusing or irritating. I think I got just enough laughs out of him to tip the balance slightly in his favor. I can tell you however, that as a 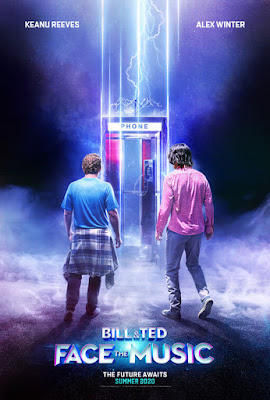 long time SoCal resident, San Dimas never appears as itself in this movie. There was one static shot in the credits of the real San Dimas High School, but all other physical similarities are non-existent.
The other thing that is missing from the movie is a song track that would be worth playing back. I did not notice any killer songs being used as background music, and the stuff that was supposed to be original, entirely lacked a hook. So how is it that after these criticisms, I can still say the movie was fun, thats simple. It is stupid and relishes it's stupidity. I have no idea who Kid Cudi is, but I know that when he is given the exposition that is supposed to explain the physics of the plot line, it is supposed to be ironic. It was, because it is scientific mumbo jumbo spewed forth by a peripheral character, at an opportune moment, and we are just expected to let it go. I could do that, and did so with a number of other things in the film, because the two slackers and their cohort were making me smile and forget about the really dumb stuff happening in the world these days.
Posted by Richard Kirkham at 8:39 AM