Scary Stories to Tell in the Dark

The short stories that this film is based on were apparently popular for several years and encouraged an interactive view of reading, with deliberate shouting at jump scare moments or a cleverly timed flashlight or hand touch. This is just the thing for adolescent ghost stories, told at a camp, retreat or sleepover. The film repeats the concept if not the exact stories. It is directed at a maturing tween audience, thus it is rated PG-13, with a good amount of creepiness but a very short supply of gore. It is a family friendly horror film that can be appreciated by mild core fans rather than just the hard cores gore crowd.

Back in the 1980s, this might have been an anthology film, like "Creepshow", "Cat's Eye", "Twilight Zone:The Movie" or "Tales From the Dark Side". Someone, probably co-screenwriter and producer Guillermo del Toro, decided to string the stories together in a single narrative that feels very episodic anyway. The concept does have the advantage of giving the audience a little more time to care about the main characters and what is going to happen to them. The thread of the book written by a spirit as a story plays out is just enough to make the plot work at moving forward coherently. 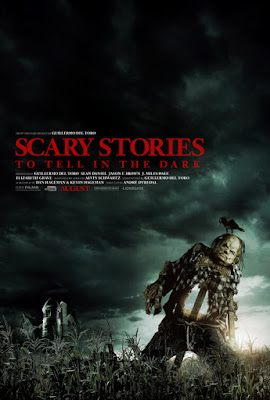 "Scary Stories to Tell in the Dark" plays like a demented version of "Willie Wonka and the Chocolate Factory". As each victim gets singled out by a specialized need they have and it gets woven into the story, characters start to disappear. Unlike the Chocolate Factory however, there are no Ommpa Lumpas to make things right afterward. While it starts out as a haunted house movie, it really follows the curse plotline much more of the time. The doomed protagonists try to figure out what fate will befall them, and then the group reacts. There are some pretty good sight gags and more than a few jump scares to keep us interested. There are a couple of things however that don't make a lot of sense.

Setting the story in the week between Halloween and the Election of 1968 does not seem necessary. Everytime we get some background on the Vietnam War or the campaign, it takes us out of the main idea of the story and redirects our attention. There is one minor plot point that might require this time period, but it seems so obscure and last minute when it gets dropped in, that most of the audience, especially the kids that this is directed at, will shrug their shoulders and wonder why this is being presented as a history lesson instead of a contemporary story.

This is a movie that will have a long future at Halloween film events focusing on kids. Maybe we can stop pretending that "Hocus Pocus" is a good Halloween movie, and instead get kids to watch something like this. It sure does feel like it is being set up for a series of sequel type films, but the producers may have painted themselves into a nostalgia corner with the time setting. I guess we will see in a couple of years.
Posted by Richard Kirkham at 5:42 PM