The DC Universe has been a controversial playground for film fans and comics aficionados. With the exception of this years earlier entry in the collection, "Wonder Woman", the films have not had a great deal of enthusiastic reception. That has not kept them from being financially successful, but it does leave fans dissatisfied and ready to jump on the next film with every misstep. "Justice League" will probably continue that trend instead of reversing it. Many of the issues that cause hesitation are still present in this entry, but despite the mistakes, this film was satisfactory in accomplishing some of it's goals but mostly in entertaining the audience. It may not be "Wonder Woman" but it is a step up from the murkiness of the other films that preceded it.

Goal number one, get all of the characters in this Universe introduced and started on their own stories. "Man of Steel" was supposed to do that for Superman, and it did set up a lot of the material that has followed, but it was stodgy and grim and lacked the spark that made the Christopher Reeve films fun. I hope it is not a spoiler to say that Clark Kent/Superman does play a significant role in this movie. More on that later, I'll put a mild spoiler warning on that section for anyone who wants to go into this blind. Batman got reintroduced in "Batman vs. Superman", a film that was convoluted but had some great spectacle and the irresistible appeal of the two superheroes dueling.  Ben Affleck's Batman was more impressive in that film, here he seems to be less engaged. It's not until near the finale that Affleck starts to give the character the energy we want. Gal Gadot can do no wrong this year. She is the character that we most want to see and she leads the narrative strings around so that everyone else can follow what the heck is going on in the story. I'm not tired of seeing her fight CGI bullies yet, but at least she gets a more complete one to fight here than she did in the stand alone film.

Three new characters get introduced in a more elaborate manner than the brief thirty seconds they were afforded in the prior film. You would think with so much to do that the story lines would begin to feel over stuffed. That's not the case with these three characters. Judicious editing and story telling give us just enough on each one so that we feel they do really exist in this Universe, but we don't dwell on their backgrounds more than is necessary. I suspect that Jason Momoa as the Aquaman will be a big hit with the fairer sex. My wife liked him quite well and his belligerent humor was one of the things that helped make this movie a little more fun.  Ray Fisher has to perform under prosthetic metal and through elaborate CGI accoutrements, but he still makes a solid impression. His character has the most detailed backstory and includes actor Joe Morton, a face that should be familiar to fans from his association with another cybernetic character. The breakout character however has to be Ezra Miller's Flash. Like a yopung Justin Long, Miller comes across with puppy dog enthusiasm and a sense of humor that is sorely needed in this Universe.  There is a mid-credit stinger that you will want to wait for that gives him one more chance to make us laugh.

[Something of a mild spoiler ahead]

The best thing about this film however is the restoration of a sense of humanity to Superman. In the initial stages of his return, we are threatened with a repeat of the grim countenance of Kalel and it looks like "Man of Steel" will repeat. Somewhere after Henry Cavill reunites with Amy Adams as Lois and Diane Lane as his mom, Clark Kent returns and Superman becomes something much closer to the character we love.  When the final battle begins, Superman shows up and it feels like Christopher Reeve is being channeled by Cavill. There is a spot where he gets to smile and suddenly, this feels like the movie I have wanted all along. I don't mind the series being more serious, but our main characters have to give us something to root for. Finally, I think the series is getting to that point. I like the work of Zack Snyder for the most part, but he does have those crutches he relies on for drama in the fights. He is the credited director although Joss Whedon took over in the last few months when Snyder had to step away from his project for personal reasons. Maybe Whedon lightened things up a bit, but this is definately the film that Snyder has been nurturing to fruition for several years. 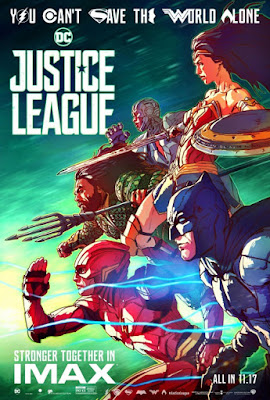 The antagonist in this story is another CGI creation, but there is at least some backstory and it does not feel rushed. The transformation of the planet into a world that the character wants is  mechanical in nature, but it was tempered with a little family story to make the stakes more meaningful. If everything is about the end of the world every time, it is going to get a little boring. This brief side trip from time to time reminds us of the human stakes involved. This is the sort of thing that seemed to be missing from the earlier films. The stakes have to be something that we can relate to or else it is just going through the motions.

I enjoyed the film far more than the second wave of negative word would have me expecting. Early reviews were promising, round two was wholly negative, and now I have seen it for myself. They have not solved all of the problems the DC franchises have faced but they did make great strides into turning this into something more than just a money making enterprise. If the new characters are given a chance to shine a bit more and Superman keeps up the more optimistic demeanor, I will be able to look forward to more of these films. It is probably a good idea to allow some other directors a chance to invigorate these stories, but the Snyder lead trilogy has set a better framework than many critics have asserted. Good news for film fans, it is also just two hours.

Posted by Richard Kirkham at 8:48 AM