We live in a binary world. At least we do in the current times. People play games like "Would you Rather?" or they swipe left or right. With the rise of social media, the desire for instant gratification has encouraged the most extremes of views to be the ones we pay the most attention to. The whole idea of social comparison has been reduced to "It's Awesome" or "It Sucks." Well my friends, on this blog we don't play by simple binary rules. Even though the title of today's subject seems to suggest we come down on one side for one hero or the other, the world is more complicated than that, and so is this movie. If all you are looking for is an instant up or down, prepare to be disappointed. "Batman v. Superman: Dawn of Justice", is not the holy grail that comic book fans would hope for, but it is also not the POS that so many haters on the internet are willing to tag it as. As a story it is something of a mess, as a movie it is a puzzlement, but as a spectacle it is pretty impressive and there are some other small things to recommend it. 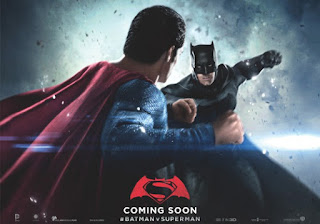 Here is another example of the twofold choice that is foisted upon us by our social peers: D.C. or Marvel? The success of the Marvel Universe in the movie theaters over the last few years is a credit to patience and planning as well as good writing. Starting with "Ironman" the comic worlds of the Marvel stories have been brought to life and linked very effectively. Even though there are glaring failures with Marvel Product, that can usually be attributed to rights issues which have resulted in three different studios trying to manage the comic universe. Disney now owns the most successful of these and with "The Avengers" has merged them together into the kinds of elaborate story lines that readers of the comics have enjoyed. Cross pollination has produced some fun moments and at least two great films, "The Avengers" and "Captain America: The Winter Soldier".  Certainly, the D.C. comics, with the most iconic Super heroes of all times could do the same. The Christopher Nolan Batman films are pretty much a separate property that Warner Brothers would like to merge into a cohesive Universe with Superman. 2013's "Man of Steel" was an attempt to restart that franchise with an eye to building a comparable comic universe to the Marvel films.

One of my major complaints about the new version of Superman is that the story and the character are so serious as to lack any joy at all. Henry Cavill has a sly smile that could be used effectively if the screenwriters and the director choose to do so, if any of you saw last year's "Man From U.N.C.L.E." you know what I am talking about. There is really only one moment when Clark Kent/Superman seems like he might be enjoying his time her on Earth, of course if you came home to Amy Adams sitting in the bathtub, you would smile too. That's about it though. There should be more by play between the main characters and there is not much. The only other time a smile might cross your face when this film is running is when Wonder Woman shows up and the two guys simply look at each other and "wonder" where she came from. Superman gets duped a couple of times in the film and that feels like a problem also. Cavill's best scenes are with his co-stars from the original film he appeared in, otherwise he seems to be brooding and angry most of the time.

Now you expect Bruce Wayne/Batman to brood, after all he is "The Dark Night". One of the things that should surprise the pessimists about this film is the performance and portrays of Batman by Ben Affleck. A redeeming feature of this film is that it accurately suggests that there is an aftermath to the wanton destruction that took place in the earlier film. This story connects Bruce Wayne to those events as an eyewitness and a victim. Batman's frustration with taking down criminals is exactly right, they are like weeds, as soon as you pull up one, another rises to take it's place. This Bruce Wayne is suspicious of Superman and willing to try to take a stand, even though Alfred and the rest of us can see that it is a little bit driven by tunnel vision. Affleck does a good job playing a conflicted and grim Bruce Wayne as he tries to figure out what plots are afoot and what role Superman plays in them. There is a scene at a fancy reception given by Lex Luthor, that allows Afflect to play detective and try to flirt a little. Just like Clark Kent, Bruce Wayne is given an insufficient amount of time with his personal life to feel much of a stake. Jeremy Irons is a great choice to play Alfred, but he is very under-utilized in the movie and that is a pity.

Neither character gets much of a chance to make an impact on us emotionally because so many things are happening in the story it is hard to keep track. Kryptonite is being discovered, as is Wonder Woman, and Lex Luthor is plotting three different things at once, some of which feel unnecessary in the long run. There is an investigation into Superman's intervention in a terrorist camp and a disgruntled victim of the war with Zod is part of the intrigue. In the course of two and a half hours, there are a half dozen story lines and they are interspersed with flashbacks and dream sequences so often that it is sometimes difficult to tell how it all fits together and what actions really are supposed to be taking place. It does not help that Jesse Eisenberg has been directed to play Lex Luthor as a victim of ADHD with a touch of paranoia. Comic book fans who complain about the villain monologuing the hero, should appreciate the frequency with which Eisenberg simply can't complete an idea out loud, or in one very obvious case, coherently. This film is really a straight drama with very little in the way of heroics. The drama is complicated and the characters are shown in such murky circumstances that it is hard to fathom motive even when the actions are explained. One person in our group put it in a straight forward way, "Why can't Superman and Batman see that they are being manipulated and simply kick Luthor's ass?" That's a good question and it is not an easy one to answer.

So, at this point we have that the tone is grim, the plot is convoluted, the characters lack much character, and it is long. So whats there to recommend? Well, the look of the film is impressive in scope and original in conception. Batman's toys are integrated into the story well and as I've already said, Afflect does a fine job with an older, discouraged and angry Batman character. There are two sequences with Superman's family that are pretty solid, and Amy Adams is naked in the bathtub. So that's an inventory of what's good about this film, is there anything great in it?  The best element of the film is Wonder Woman, who is kept mysterious for the most part and arrives on the scene in a moment spoiled by the trailers for the movie but still able to give us a thrill. Gal Gadot was in four of the "Fast and Furious" movies and I don't remember her at all [OK, I've only seen three of them myself, but she was in all three of those],  here you will definitely remember her. She is shooting a stand alone "Wonder Woman" movie and her presence in this film, makes me want to see that. I  also like the seeds that have been planted for future films featuring characters from the Justice league. The problem that I foresee is that the tone of each of those stories will be as down as these first two films have been. 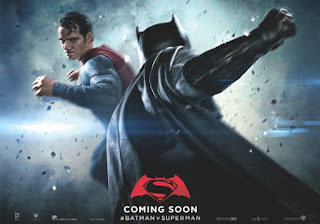 We need a little less sturm and drang, and a lot more character. The central characters don't have to be cartoons but they could be more human by having some emotion other than being pissed off. Two charismatic actors are being played with by director Zack Snyder. He has them as his action figures to move through an afternoon of a child's version of a story, "fight-explosion-fight-chase-fight." The screenwriters need to take a lesson from the films from the past that used these characters. We should like them because they have strength but also personality. A shot like Michael Keaton in gravity boots or Christopher Reeve discovering that phone booths have become phone kiosks, would go a long way in creating some goodwill for these projects. Spectacle is enough for now, but if you want people to stay engaged for a dozen more films from this universe, you better give us more to care about.

Posted by Richard Kirkham at 9:49 PM

I wish they took some more notes from the Donner films. At least those established real relationships in the midst of an epic action-adventure story. I suppose Nolan did a similar thing in his trilogy. Anyway, I concur with your review. I did pick up a subversive subtext in Fishburne's performance.

I did not mention Fishburne but he was one of the good things about the film. There is a Jonah Jamison vibe there and the swats at print media were dead on. So glad you left a comment like this. There is plenty to discuss on the film that did not make it into the review. This is a great place to have those discussions.

I completely get what you're saying but I actually quite like the tone. I truly believe Snyder is seeking to bring us a tone more in line with the comic books than the normal superhero movies. Whether that translates well for other people is another thing. It seems it has not. Still, I like this film a lot especially as something different than the Marvel formula. Both universes feel distinct and I appreciate them both for that.

I don't think that the Marvel universe needs to be replicated, but I do think there is something missing here and it is a sense of humanity. It could be humor or some other component, but something needs to perk up the energy here. People are talking about comic story fatigue, this will accelerate it if all we get in the negative aspects of life. Still, there was enough here to justify a more positive than negative conclusions.