A few months ago, I saw a film that was set in the aftermath of the events of Dunkirk. "Their Finest" was a personal drama set during the London Blitz. Up to this point it has been my favorite film of the year. It has now been supplanted by a film that features the events that are referred to in the first movie. I have been anticipating Christopher Nolan's "Dunkirk' for several months, ever since the first teaser trailer showed up on the local cinema screens. I have seen eight of his films and much like the first ten years of Pixar, I was never disappointed. There is however that first time when your expectations will exceed the results. We will have to hold on for another film for that to happen. "Dunkirk" is a dramatic success without strong characters, a tension filled story for an historical event that people know the outcome for already, and a technical achievement that relies on the directors eye more than every special effect in the book.

Let's look at those accomplishments in that order. Fionn Whitehead is starring in his first film, and he manages to give a credible performance without a large amount of dialogue and with no back story. His character is one of nearly 400,000 men trapped against the sea by the enemy forces after a military failure in the early part of World War II. Beyond running and searching for a place to relieve himself, the only way we know anything about his character are his actions. He is empathetic, but also fearful. He manages to get to the front of a line of soldiers waiting to embark on a hospital ship by using his cleverness and his empathy. He wordlessly connects with another soldier as they collaborate ways to escape from the beach. A third soldier enters the picture as they escape from a sinking ship, he is played by Harry Styles, another character that we can only judge from his behavior in interacting with the other two. This is so not a traditional war story designed around characters that we will care about and feel an emotional bond to. These three main characters from the troops trapped on the beach are ciphers standing in for all the other men trapped there as well. No one talks about their girlfriend at home, or reminisces about their dog, or tells a story of their battlefield experience. They unambiguously try to survive and escape. That pretty much sums up everything which focuses on them. The same is true of Tom Hardy's character, Farrier, a Spitfire pilot who joins the battle and has maybe a dozen lines in the story but is on screen maybe more than anyone else. It is another opportunity for him to act while hiding behind a mask. In this film he gets to do more than hook his thumbs in his suspenders but we only see his face at the very end. We know his emotions only through the choices he makes as a pilot in combat. He is heroic, thoughtful and practical. All of that has to be conveyed with few props and no other actor on screen to play off of. The closest we come to characters that we might identify with and care about are the three men heading to "Dunkirk" as part of a flotilla of rescue boats. Mark Rylance is the captain, accompanied by his son and a seventeen year old boy who sometimes serves as a mate on their pleasure boat. Mr. Dawson knows what it is they will be facing. When the three pick up a stranded soldier on a ship that has sunk, there is more dialogue than anywhere else in the film. Because of the interaction and the small amount of background we get, it ends up that the most emotional investment we have in any characters are those in the civilians rather than the troops.  That's about as close to a negative thing I have to say about the film characters.

Nolan made a decision to tell three basic lines of story in the film. Each is highlighted early in the film with a title card indicating where and when the events we are watching took place in the context of the experience. What he has managed to do is build stories that have completely different timelines into a single whole where everything synchronizes in the third act. The vessel at sea is a story that takes a full day. The aircraft battles occur in a two hour window. The story of the land bound soldiers occurs over several days. Each story line has small little conflicts and extended moments of tension, but as the climax gets closer, we see those stories intersecting and the brilliant score by Hans Zimmer begins to speed up its pace, For most of the movie it si background music that feels like minutes ticking against a clock. The more time passes, the more tense it becomes. At the climax, the score is more traditional with some of the same themes but accelerated into ticking seconds rather than minutes. The story of the soldiers involves several near misses, both in the sense of death and in being rescued. Those moments play out very much in bursts of energy followed by moments of calm. Most of the time on the small boat is more lethargic and there are brief moments of energy that pass rather quickly. Almost every moment in the plane's cockpit involves aerial combat. Each segment there is brief but filled with action. Nolan mixes these moments expertly to keep the flow of the story going. The characters in each of these scenarios get different resolutions as well. Each outcome feels authentic given the circumstances.

I'm not a film maker or much of a photographer, but I can notice when something is being done effectively in showing us a story. The aviation combat scenes are primarily shot fro a perspective immediately next to the fuselage over the wings of the plane. The only time we see a pilots eye view is when there is targeting and the enemy is being shot at. All of the scenes of the pilots are in close up inside of the cockpit. The vastness of the beaches and the number of British and allied forces hoping for rescue are emphasized with wide shots that put the figures in perspective. The beaches are not crowed but rather they are dotted with need lines of men queuing up for rides that never seem to arrive. The scenes set on the ocean show the ships traveling across the channel, but they are not bunched together until the end. The "Moonstone", the yacht that Rypance captains, is small in contrast to the military vessels that are sometimes sinking in her wake. All of the ships are made more insignificant by the smoke  climbing into the sky on the horizon. The deadly action that starts off the film is directed at a frantic pace, with the same high levels of dread that marked "Saving Private Ryan", but without the conspicuous violence.  The deadliest moments involve the participants struggles inside of the various craft they board, Fire and drowning are the most pronounced threats in this view to the events. Nolan reminds us that the danger is not simply a bullet or a bomb, although there are plenty of those, but panic and hubris can take a soldier as well.

It is not spin to turn this military failure into a false victory.  The expedition onto the continent had failed, miserably. There was however a victory in the retreat that took place. Tacitus said it best, "He that fights and runs away, may turn and fight another day: but he who is in battle slain, Will never rise to fight again." These words are not the excuse of a coward but the logic of a realist. The British people were able to see that this successful retreat would enable them to continue to fight. Nolan's story shows the shame on the faces of the soldiers returning home as well as their relief. It is the enthusiastic embrace by the public that makes the event a victory in the long run. "Their Finest" showed how that might be turned into a morale booster in the darkest hour of the war. "Dunkirk" shows us the sacrifice and courage it took to stand this bitter turn of events and grow from it. Later this year we will get a film featuring Gary Oldman as Winston Churchill. The film ends with a piece of Churchill Rhetoric, designed to rally the citizens of Great Britain, but also to plead with America. The events depicted in the film give credence to his words. 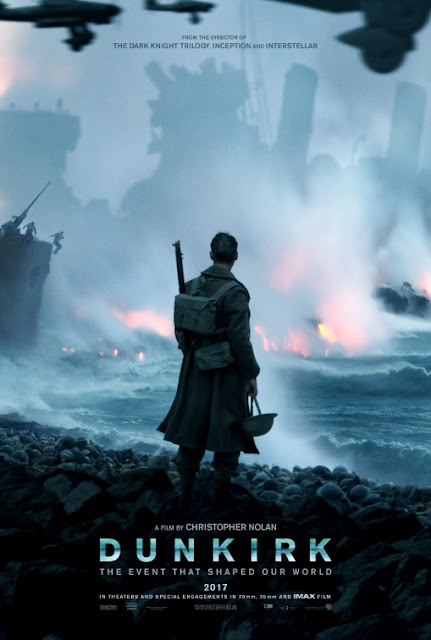 He that fights and runs away, May turn and fight another day; But he that is in battle slain, Will never rise to fight again. Tacitus
Read more at: https://www.brainyquote.com/quotes/quotes/t/tacitus118925.html

This is a story that needs to be understood by new generations. Nolan gives the events a context that most of us need and does so with a degree of technical excellence that is superlative.  If it is not emotionally wrenching in every segment, it still has a heart that we can all admire.