It has taken me three weeks to come back to this movie. Many have already put the shooting that took place in the rear view mirror and have moved on. I am still trying to do so and I think I an close enough to being back to normal, that I can give an honest assessment of the movie at this time. It is a Friday night and we went to see the film for a second time in the hopes that the cloud had lifted enough do be more focused. I am a big fan of the previous Christopher Nolan Batman films. "The Dark Knight" still takes my breath away at times. The scale of what Nolan is attempting with these movies is impressive. They never felt to me like the obligatory next chapter in a long running series. It is still a comic book movie, but it has things to say about our responsibilities to each other and societies sense of justice.

After the intricate but sometimes logic defying puzzle-box of the prior film, it was hard for me to envision something that would be equally interesting and challenging. There are several aspects of the movie that attempt to live up to it's heritage. The question of whether we should give up and just start over comes back into play. That was the original theme in "Batman Begins", and indirectly the question that the Joker suggested with his mayhem. Also at play is the importance of symbolism, whether it is the creation of the icon that Harvey Dent turned into, or the shadowy threat that the villain Bane represents. The supposed eight year gap between the events in this story and the last one suggest that Batman himself felt that the theatricality of his icon was no longer needed since Dent had become the White Knight and as far as Gotham was concerned, peace was at hand. Symbols continue to be important though, and from an audience point of view, the return of the Batman creates exactly the kind of satisfying hero yearning impact that a comic book character provides.

The two most emotionally satisfying moments in the movie for me, are both reintroductions of Batman to the citizens of Gotham City. After a raid on the stock exchange, Bane and his cohorts are escaping on motorcycles, protected by hostages that limit the ability of the police to take the criminals out. When the Batpod reappears, and some of the technological wizardry of Batman starts being used, you can almost feel the breath of the audience being sucked in. There is a short shot of the Batman, seated on his insanely wild motorbike, looking over his shoulder that gives us the kick in the pants we need to set our story in action. Late in the movie when Batman returns after a forced exile, he sets up a theatrical symbol of his return, worthy of the Z that Zorro would scratch on the wall or his enemies. It is another powerful visual and emotional moment that at least reminds me of why I care about these movies.

The plot of the film is a bit convoluted, and of course it could only happen this way in a comic book world. There are however several elements from the real world that creep into the story to ground it a little bit more. There is a stream of Occupy Wall Street anti-social behavior that is being stoked by the villain, even though his political rhetoric does not fool any except the most gullible. I found a criticism of our military and political impotence in the face of a nuclear threat. No one makes any reference to Iran, but the unwillingness of key players to respond more assertively and the uncertainty of what the response will provoke, sure felt familiar to me. Finally, there are the everyday constraints that are placed on law enforcement, and an implied criticism of special rules for special cases that feels much like a swing at the PATRIOT Act. Nothing is simple from an ethical point of view, but when it comes to the plans of the antagonist, everything falls into place a little more conveniently than is ever realistic.

Nolan sets up these points clearly, and does not try to deal too much with the logic of the process. The events set into place are really there to allow us to watch how they will play out through elaborate action scenes and tense moments of complications. The movie is three hours long and has relatively long segments where there is no action, just exposition and dramatic background. It could be tightened a little bit but the slow moments are quickly overcome when the action beats kick in. There is a dramatic opening scene where a plane is hijacked and crashed mid-air to simply cover up the kidnapping of an important scientist. It is not essential to the plot, but is does give us some intense emotional moments and a terrific visual counterpoint to a similar scene in "The Dark Knight". There are two intense hand to hand combat sequences between Batman and Bane, they are well staged, very clear and pretty brutal. They also give each character a chance to give us some dialogue that is memorable and position the characters power status as being in flux.

The two chases that Batman takes part in are both effective. The first one puts the Batman in the role of both pursuer and pursued. It reintroduces the character to Gotham City's narrative and it introduces some pretty cool toys to us. The last chase is the climax of the film and it is long on complications, and it is juxtaposed with several other continuing story lines very well. The race against time is multiplied by three different scenarios, each one having it's own tangential emotional moments. The look of this final chase sequence is unique in the series because it takes place in the light of day but is still effective at conveying the darkness of events taking place in the story.

There are a dozen characters that are critical to the plot of the movie. Some of these characters are given a chance to to really shine. Commissioner Gordon gets to have an active part in the early going and then returns for more action toward the end. Selena Kyle (Catwoman) turns out to be a complicated relationship for Batman, sometimes a cohort and sometimes an antagonist. Her story arc was set up well and played out with just enough detail to make it worthwhile. Bane and the remnants of the League of Shadows are formidable opponents, but as characters they are less interesting and less developed than the Joker was in the last movie. Both Christian Bale and Tom Hardy have to play their parts through masks and they have their voices heavily modulated. It works for the movie but the performers are limited in using their skills. Hardy is reduced to acting with his thumbs, trying to make hooking your fingers into your jacket or suspenders menacing. Michael Caine is great as usual, but he disappears from the movie early on and only returns in time for an emotionally satisfying conclusion. The biggest asset to the film is the character played by Joseph Gordan Levitt. His officer Blake is the real story arc that will connect with the audience and his performance was pitch perfect. 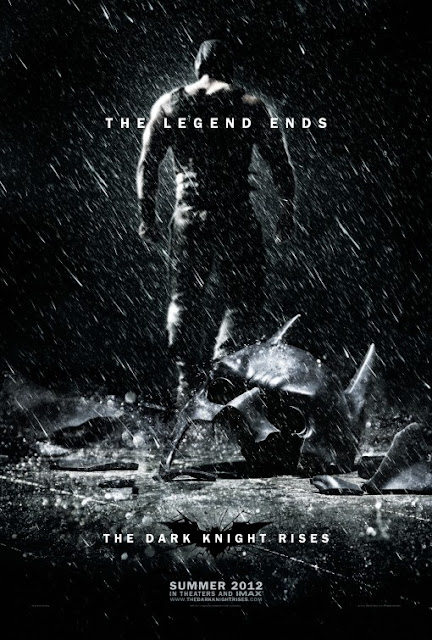 "The Dark Knight Rises" is not a perfect film, neither was it's predecessor for all of it's attributes. It is however a perfectly satisfying conclusion to Nolan's Dark Knight storyline. The quality of the music, art direction and photography are unassailable. The script and direction falter in a few places, but the audacity of vision and the talent in the action sequences rescue the movie repeatedly, and they are the product of the same minds. This is a movie that will grow on people and become even more loved as we get used to it's cadence and we give in to it's strengths.
Posted by Richard Kirkham at 10:57 PM