Last night I had a disappointing experience. We decided to watch a horror film and we chose "The VVitch" because we'd heard a lot of positive things about it. Maybe it works for other people but I was not happy. In fact I found it quite irritating in the way the story gets resolved, or at least sort of resolved. Today, to wash the bad memory out of my brain, we picked another widely acclaimed horror film. This movie is more contemporary and it has an interesting perspective on the world. I'd seen the trailer and I was afraid it was going to be a polemic on white privilege, instead, the movie twists the idea of cultural appropriation in a way that is totally off the wall and satisfying.

Daniel Kaluuya is a name I did not recognize, but he was in a movie I saw a couple of years ago, "Kick Ass 2". His part in that movie was not significant, but his role in this movie is impressive. He is the lead and he carries most of the drama and horror of the film on his shoulders. The only thing I know Allison Williams from is the highly criticized Peter Pan Live form a couple of years ago. She was also very good in this film and her character has surprising elements to it that will turn the story at some points. Three other well known old timers are also in the cast. Bradley Whitford from the West Wing and "Cabin in the Woods" plays the neurosurgeon father of Rose, the white girl that is dating Kaluuya's character Chris. Dad is just enough of a social justice liberal to be disarming, but still he and his wife player by Catherine Keener, are just a little off.  Mom is a psychiatrist who uses hypnotherapy to help clients deal with smoking and other issues. At first they seem just a little odd but as time passes, Chris begins to listen to the doubts that he might be expected to have as a lonely black face in a well off suburban neighborhood. The third character played by an old hand is Jim Hudson, another blind character played by Steven Root. He turns out to be a key element of the reveal when it shows up.

The slow burn creep factor in this movie is exquisitely patient. We know things are off but we have no idea exactly what is going on. Chris gets warnings from his friend Rod, who is concerned about him going into the country with all the white people.  Rose is supportive in the way a girlfriend ought to be, but she is also a bit nonplussed by the potential of her black boyfriend meeting her parents without their knowledge of his background. All of the family friends that show up at the parents house are also a little too awkward and direct about Chris and his ethnic difference. There are a couple of disturbing or frightening scenes that involve the servants at the house, and there is definitely a Stepford Wives feel to the goings on.

The twist comes and it is a dozy. Suddenly things are more frightening than they might have appeared and the story gets clever with the social conventions but maybe a little to direct with the horror elements. Rod gets some great sequences that add some comic moments to the film, and that makes the story feel a lot more believable than it otherwise would have. I can't give away anything, it's not my style to do so, but I can say that the story is a lot more satisfying than the psychological supernatural film I saw last night. The wrap up to this film may be more conventional, but at least it feels like it is part of the story that we have been watching. 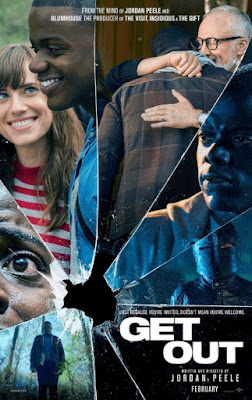 Writer /Director Jordan Peele is a guy I recognize but I have not really paid much attention to. I have seen the routine with the substitute teacher, in fact, I plan on using it in my classes. As an actor, I remember him from the "Fargo" TV series, as one of the FBI guys who screws up massively. This film shows that his talent is not limited to comedy and he clearly understands the check points for a good horror film. This probably does not need any recommendation from me, the movie is doing good business after all, but I will be telling anyone who will listen, this is worth your time. As I said to my daughter at the end of the film, "Now that's how you make a horror film!".


Posted by Richard Kirkham at 8:27 PM