There are many in the film community who will deride the idea of remakes, live action or otherwise. It seems to suggest a shortage of creativity somewhere in the script department. I understand that feeling and I myself often hesitate to venture into a new version of an old film. You don't want to be disappointed or have your fond memory of the original besmirched. At the same time, if the movie touched you in some way the first time, there may be something to the subject that can affect you again, and why someone would not want that is hard for me to fathom. Of course it is also a money issue, but every movie is a money issue and remakes and sequels do not always guarantee results despite the hopes of producers everywhere. The new version of "The Jungle Book" is a live action remake of the last film that Disney himself oversaw. The animated version is a different take on Rudyard Kipling's stories from the 1942 version. So we have been here before. I was encouraged to go by word of mouth and several sources insisted that the 3D version is the one I wanted to see, so I used up all my accumulated AMC Stubbs points and pulled the trigger on a 3D IMAX (FAUXMAX) screening this morning.

It was a delightful experience and lived up to most of my hopes and it included a couple of surprises as well. The story closely follows the tale as it was told in the animated version, and here is the surprise, they even included a couple of songs. Admittedly the animals in this version are as animated as they were in 1967, but since they are photo-real, it was still a little bit of a shock that they spoke and sang. One of the best things that the film has going for it is the voice casting. Bill Murray as Baloo just about perfect. He is not a singer and the presentation of "The Bare Necessities" is not a show stopping moment but rather a casual way of telling us who the character is supposed to be. Similarly,  Christopher Walken as King Louie is no Louie Prima but he gives an engaging almost rap like delivery of his signature song. The film has humorous moments but it does not have the comic visuals that would go along with this sequence. Probably a good choice.

The most valuable addition to the story here is the integration of the wolf pack into the story. There is a code that they live by which becomes a turning point for the animals in the story, and the family development makes Mowgli much more a part of the pack. That also makes what happens in the climax of the film more satisfying and exciting. We got a little bit more about Mowgli's background and a clearer sense of what it is that drives the villain of the piece, Shere Khan. Idris Elba does a menacing voice that has authority, but it lacks the snarly sophistication that George Sanders brought to the role. Bagheera is voiced by Ben Kingsley and he is wise and loyal without the fussiness that Sebastian Cabot added. The changes are subtle ones and they seem to be designed to make this more "real" version of the story work for the universe that is created here.

Obviously, the real stars of the movie are the technicians who have brought the jungle to life. They make all the animals real, in spite of the size perspectives and physical details that have to be worked out. It is a complicated job and if you look at the credits for the film, you will see hundreds of names, most of whom I'm sure Director Jon Favreau never met, much less spoke to on a daily basis. There was an interesting location id in the final credits saying the film was shot entirely in the City of Los Angeles. Guns and Roses may think of it as the jungle, but the closest it comes in looks are some bad neighborhoods, there are no cliffs, rivers, or lush Savannah anywhere around here, this was all created in the computer. 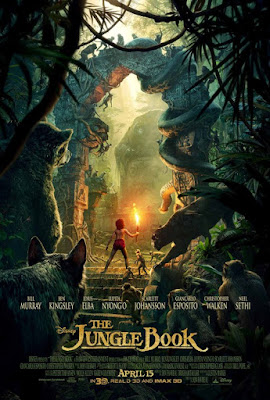 Young Neel Seethi is the star of the film. He is credible in the action sequences but a little stiff in the dramatic scenes. Child actors are tough, they have great presence sometimes but they may have limited range at their young age and I think that this is the case here. The action scene at the end is pretty spectacular, although there are several scenes where the visuals impress, including a mudslide/stampede sequence. The fire effects and the the trees in the last action scene are rendered in a way that makes the #D investment worth the price, but there were dozens of shots like that throughout the film, so I will add my voice to those who say go 3D. Stick around for the credits and you get Scarlett Johanson's version of "Trust in Me", which did not make the film but does play and remind us of the character and the earlier movie, without having it's specter hanging over this film the whole time.

Posted by Richard Kirkham at 5:41 PM