A long time ago, in a theater not too far from here...

I've been a fan of Star Wars since May 25th 1977, when on opening day, for the second showing, my group of friends walked right up to the box office and bought tickets and we went inside.  There was no hype, there were no lines yet and the phenomena was just about to hit. By the time the weekend arrived, the lines were around the block and the film was making headlines. If you watch the first primitive trailer for the film, you might think it looked corny and old fashioned. In a way, that's what sold it to me and millions of others trapped in the 1970s. Cynicism had run amok, in politics and popular culture and Star Wars was an antidote that went down smoothly. Almost 40 years later, with the world in sad shape and our culture dominated by pornography masquerading as television and political fecklessness as a national mantra, we need another dose. "The Force Awakens" attempts to be that cure and for the most part it works. This movie is fun and real in a way that has not been the case since the 1980s.

As usual, you will find no spoilers here, and J.J. Abrams may have achieved the near impossible in this era of social media by keeping the pleasures of his new film under wraps for us to discover on our own. There are plot twists and secrets everywhere in the film and fan service sufficient to satisfy even the neediest of old school geeks, but there is also a freshness to the film that makes the plot devices less important than the spirit of action and adventure we are witnessing on the screen. This movie is highly accessible to fans and non fans alike. The Force Awakens looks more like a sequel to the original trio of films than the prequels do, and that in large part accounts for it's ultimate success.

There are deep roots to the story we are given, and not all of those rhizome sprout plants in this episode. In fact, the very first section of the opening crawl, gives us a macguffin that drives the plot and very little else. In the course of the story we learn a few things about our past heroes and the lives they have lead since the restoration of the Republic, but it sometimes feels like the facts and stories are being parceled out by a selfish Santa.  There is just enough information to explain a plot point, but not enough to satisfy our interest in just what happened. Some of those seeds are certainly going to come to bear fruit in future episodes, but it is a bit frustrating. There is an exceptionally obtuse sequence in the basement of character Maz Kanata. It raises our expectations, makes some soon to occur events more plausible but ultimately raises questions that are designed to be answered in episode IX.

The structure of the story will be familiar to everyone who saw the original Star Wars in 1977. There is an as yet unaware hero, ready to step forward, there is a set of secrets hidden in a droid, there is a wild card rogue second lead, and there is a wizened master to teach the ways of the force (or at least the rules of the game). The action beats will also be familiar. Agents of the First Order, the remnants of the empire and a new developing Sith relationship, are pursuing our heroes and adventure ensues. J.J. Abrams and the writers manage to substitute a few scenes and use different characters, but you will recognize the Cantina scene and the escape from the empire dogfight. The call backs to earlier films are found throughout the movie, including the story line. I did not see it as a lack of creativity but a desire to make sure that the audience understands the universe that these characters inhabit.

Maybe it is bad form to pile on, but I think it is necessary to explain how this film manages to do so much that the prequels did not. To begin with, the casting is correct. Daisy Ridley and John Boyega are not cardboard pretty faces being moved around on the gameboard. The character of Rey is dynamic rather than passive like Padme from the prequels. Finn acts as if what he does matters and unlike Hayden Christenson, Boyega has more expressions than a scowling face. Lawrence Kasdan, Michael Arndt and Abrams himself, have an ear for how dialogue should sound when being spoken in a scene. The veteran actors also add some zing to the film, especially Harrison Ford, who in returning to the character of Han Solo, has managed to age gracefully and still be charmingly funny. The biggest asset to the films success in entwining us in the Star Wars universe was the decision to limit CGI to those elements of the story where they are needed rather than where they might save money of merely produce awe. The actors interact with their environment more effectively when there are real sets and locations being used. The desert looks like it is made of sand dunes rather than pixels. That sequence near the end was a real ocean scene and not a painting created in a computer. The forest may have some CGI trees, but in the running sections, those are real trees. The way the film looks helps us project ourselves into the story rather than holding it at arms length admiring the cleverness of the computer guys. There are still some stunning effects scenes that use computer generated images effectively, but they work better in the battle scenes and action moments than they would in the quite transition or narrative spots in the film. In preparation for this experience, I watched all of the previous six films and it was so clear how much better those choices were in the original trilogy. The technology is important but it can't substitute for what makes the scene believable.

A few plot points are rushed, and that feels like a cheat but it may be that we will be getting more detail in the next stories. There is plenty to enjoy here and there are light saber battles, comedic characters that don't irritate, and a strong sense of fun rather than a permanent sense of dread hanging over the characters. The transition of the story from our older characters to the newer ones is done much more smoothly than say the same technique which is used in a film like "The Expendables 3". We care about the new characters because we get a chance to know them. Early on, a great new relationship develops in a good action scene and then that relationship is ignored for two thirds of the movie. That was one of the few mistakes in character development in the story. There are two new digital characters that are introduced and both are intriguing but they seem peripheral to the main thrust of the character arcs we are looking at, so either use them more effectively or lets move on. 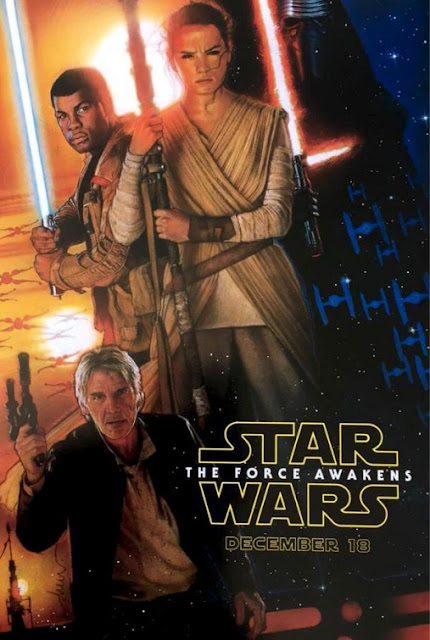 The final shot in the movie manages to raise the hair on the back of your hand a little bit and whet your appetite for the next film in the series. As I understand it, there will be a stand alone film next year and it will be two years until we get the next chapter in this story. That should give everyone enough opportunity to reset the hype machine back to a level that is tolerable. I doubt that any film could live up to the expectations that this movie carries with it. Still it manages to be successful and entertaining, if slightly less than perfect. If you want a ranking, I'd put it exactly in the middle. Not quite original trilogy perfection, but so far above the prequels that it might be embarrassing to the creator himself.

Posted by Richard Kirkham at 10:52 AM