Of all the films I have written about in the five years of doing this blog, none has received more attention and space than Steven Spielberg's "Jaws". The film celebrates it's 40th Anniversary this year. It came out just a week after I graduated from High School, and in the middle of a very weird decade, changed the way the movie business works.

I plan on celebrating the film several times this month. Today went to a screening at the Crest Theater in Westwood.

As a change of pace for my writing on this film, I decided to try a sure fire strategy to make it easy for people to chow down on and digest some more "Jaws" material. So here is the first list for our 40th Anniversary Celebration.

Ten Times the Shark isn't working but still appears on screen in some form.

The notoriously uncooperative mechanical shark used in the production, forced the film makers to find other ways of putting the lead character into the story without actually showing him. Here are my favorite moments showcasing the shark with no shark footage.

Fishing off the Dock of the Bay, Watching your Roast Swim Away.

Two guys decide to go for the $3000 bounty offered by Mrs. Kintner by baiting a giant hook with a raw beef roast and then tossing it into the ocean, anchored to the small dock they are standing on. They do this at night, on the far side of the island to avoid detection by the Police Chief. What follows is suspenseful and hilarious.

The turn of the pier at the end of the clip says everything about the invisible shark.

Once out to sea, Chief Brody and Matt Hooper are introduced to "sharking" Quint style. They are not really fishing, but the rod and reel are essential to Quint's process and it gives us plenty to fear without any image of the shark at all.

Hooper gets a drunk Chief Brody to go out on the water, at night and they discover the remains of a fishing boat that appears to have encountered our titular hero. 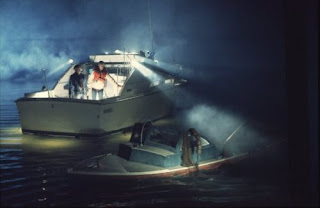 Hooper goes into the water to investigate and everyone in the audience tightens their sphincter because this cannot go well. Spielberg was so meticulous on this piece of business that he went back to the scene after it was done and re-shot some footage in the pool of editor Verna Fields. The result was a scene that levitated whole audiences of hundreds, out of their seats simultaneously.   We won't give anything away here, but Hooper's face manages to say it all.

Watching the start of the third act in the film, we get a transition shot that ironically shows the doomed Orca and the future that she is sailing into. It is a beautiful shot and it tells us to fear the shark, again without the shark being present.

Those proportions are correct.

How big is the shark? Well, let me draw you a picture.

Roll Out the Barrel.

How can we give a sense of showing the shark stalking the heroes if we can't always use the shark, easy, we'll use a shark surrogate. Those barrels that Quint uses to bring the shark to the surface, well watch them transform into creepy shadows following the Orca.

After we see the barrels attached to the shark, the Orca follows them, and for a moment, the hunters are joyous in their pursuit.

Suddenly, after being assured by Quint that he can't stay down with three barrels on him, the barrels disappear as they pass under the boat. Oh oh.

And how do you know you are in deep trouble? The barrels start following you. This is not going as planned.

Research Man, get a book and do some reading.

Just the thought of the shark startles the chief and his wife.


Who Let That Shark into the Town Meeting?

All the Islanders are getting nervous about the beaches being closed. Quint shows up to make them an offer, but to get their attention he scratches a chalkboard with his fingernails and reveals a little doodle to scare them all. 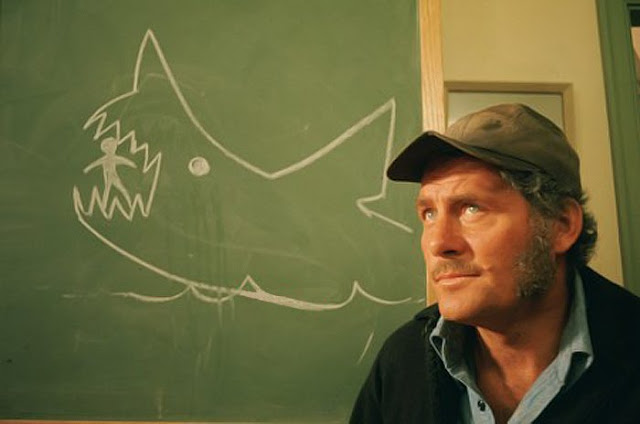 The Most Iconic Theme of All Time.

Well before we ever see a shark, we know he is around because of the much parodied but perfect theme for the shark. Yeah, you know it.


This scene catches you by the throat and the film never let's go after that. No sign of the shark, but your nightmares will never be the same.

I watched Jaws again for the fifth? sixth? tenth? time a couple of weeks ago. The whole movie still works completley from start to finish. What a great film.

This movie works for me every time and I've seen it maybe four times a year since the advent of home video and cable. The theatrical experience is the best, but the bluray from a couple of years ago is fantastic. If you are going to be a little crazed over something, make sure it is something good.

Richard, I feel like I'm getting royally screwed on this one! JAWS is playing right down the f%^&^^&cking street from me! However, the 21st is Father's Day and my son is still too young to see this film and what kind of dad would I be if I left him on Father's Day to go see a movie?? The 24th is the middle of the work week on a night when I'm stuck at home taking care of my son. So either way, I suppose my son (bless his little heart!) has ruined my chances of seeing the 40th anniversary screening of JAWS!

Eric, Sorry if the posts seem to be teasing you, I just need to celebrate. You are clearly a wiser Father than I was. You may recall that my kids were traumatized way to young by this film. It turned the youngest one into a fanatic. Put the soundtrack on in the house while you celebrate Father's Day, you'll be able to see the whole thing in your head. My best to your family on the holiday, and if you can stand it, come back and see what else I'm posting for my screenings.