I selected the trailer above because it still has a brief clip in it that makes reference to a shootout in the Chinese Theater, a scene that was removed from the film and caused this movie to be moved to January after the Aurora CO. shooting. I understand the sentiment but it seemed to be a little overdone to me. The film probably is a good fit for a January release when action fans are starved for a little love. The trailer makes it very clear that this is an action popcorn film and not really an attempt to make a classic crime film. The idea of machine gun shootouts on the streets of L.A. is clearly an invention of a creative mind. The story of how the LAPD kept organized crime to a minimum in the city has been covered before by better films like L.A. Confidential and Mullholland Falls. This is basically a pulp version of that tale and fidelity to the actual history goes right out the window.

There is not really any originality to the story or the film making. The plot is basically "The Untouchables" transferred to the West Coast, and instead of Robert DeNiro chewing the scenery, we get Sean Penn.  Of course in the DePalma film, we got some interesting character development and some actors who had charisma in spades. Here there are cryptic references to the characters past but almost no follow through on why any of that matters. Josh Brolin is a good tough guy but he has no personal development in the film, just the back story that is created for his character. Ryan Gosling I suppose is a stand in for Sean Connery, but with a love interest and lacking 30 years of gravitas to back it up. From the pregnant wife to the doomed members of the squad, and even the death of an innocent bystander, everything about this movie is predictable. There are some attempts to put a California Dream spin on the story, and that may be the right way to go, but anytime there is something that resembles a theme being raised, it is immediately overtaken by a shootout of some sort. The California Paradise idea is a good one because this was the land of opportunity after the war. Thousands were flocking to the Southland, to take advantage of  wide open spaces and the fantastic weather. That criminals would be among the immigrants is not surprising. What is a surprise is that the only hint that this criminal intrusion into SoCal was having was dead kids and kidnapped wanna be starlets. The details of the rackets are not explored, we just get histrionics from Penn's Mickey Cohen.

My parents were part of that wave of immigrants. They came out here in 1947, and got started in the entertainment business like so many others. The nightclubs and bars and hot spots shown in the film, all have a very authentic feel to them. My daughter took the train into Union Station for a year after she graduated from but continued to work at USC, and it still looks like the 1940s. Clifton's cafeteria is used as a set, and they probably did not have to do much more than take the newspapers out of the racks to make it look like it belongs in the era. I'm pretty sure the scene in the Mexican restaurant was shot at El Cholo, and it looks exactly the same. All the old neighborhoods of East L.A. and Pasadena, as well as large sections of the Fairfax district, still resemble the suburban paradise that vets were looking for.  It looked to me like the Chinatown sequence was done on a soundstage, but the reproduction from the long standing main square in the area was tip top. Some of the daytime shots of the city, with large sections of empty hillsides are clearly CGI, those spots were being filled in with new homes when I was a kid. While there may be a few blank spots here and there, the crowded hillsides don't resemble the spacious vistas of the late 40s and early 50s. The clothes, and cars and general language of the film are all accurate and it is a big draw for the audience. Those of us raised on the film noir of Hollywood, lust for the days when men wore hats that made them look sharp instead of like shlumps. Women dressed up when they went out, and all the nightspots were decorated with neon and deco themes. The vision of a gangster wielding a machine gun harkens back to Hollywood's heyday of Warner Brothers gangster films, populated by Cagney, Bogart and Robinson. The film makers know this is what we are looking for, but it happens so often in this movie that each time feels less dramatic. By the climax of the film, it is just one more shootout in a nostalgic location with the weapons used more in the movies than in real life. There was one shot of a bad guy with a Tommy gun in each of his hands. This owes more to John Woo than Howard Hawks. I think because so many locations harken back to those days, and they are iconic from movies or collective memory, we will continue to get films set in this city, but at that time period.

Brolin is stoic and determined, Gosling is wain and smouldering, and Sean Penn is over the top. Robert Patrick gets the best scenes and lines, but he is not in the story as much as Connery's old timer was in "The Untouchables". Emma Stone is really very pretty, but she and Gosling don't have the chemistry that they had in last years, "Crazy, Stupid, Love". Her part feels tacked on and underdeveloped. The other guys on the Gangster Squad, could have had something to do that might have made the story more profound, but every time an idea pokes it's head up, the shooting starts again. Michael Pena is in this movie for no reason, and Giovani Ribisi and Anthony Mackie, get only a little time to register. I always love the disclaimer at the end of a movie that says this is a work of fiction and it is not based on any person or location. That's silly, the LAPD headquarters building is named after the Police Chief played by Nick Nolte here. They slip in a reference to a more recent chief by having Darryl Gates as his driver and the guy Parker uses to bring in Brolin's character. I know they want to avoid lawsuits, but when the movie is all based on Location (LA) and real people (Mickey Cohen and Chief Parker), it is ridiculous to deny a link. 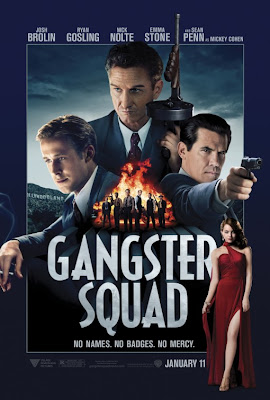 I liked this movie pretty well for what it is; a slam bang action piece with a cool setting. They overdo the shootouts and violence. The characters are not given much chance to develop past their archetypes. The city looks great and the music is good (even the segments copped from Ennio Morricone's score for "The Untouchables"). There are no story surprises and very little tension. There are plot-holes galore, but don't worry about it because the plot is just a chance to play cops and robbers in a cool setting. No one except the set dresser, art directors, costumers and make up people will be looking at this with a huge amount of pride. There is nothing embarrassing here, there is just a lack of something to care about or any originality. If you do go to see it, stick around for the credits. They play over some beautiful postcards of Southern California from that era, and you get a sense of how well they nailed the look, without getting much else right.
Posted by Richard Kirkham at 6:34 PM