When I look around the theater and see that we are the youngest people in the audience, I begin to worry that I have officially passed into old fogeydom. That was pretty much what it looked like today when we went to see "The Best Exotic Marigold Hotel". When the cast is headlined by Judi Dench and Tom Wilkenson, you realize that this was not going to be a movie that was marketed to the usual teen audience. There is virtually no chance that this will break out into a four quadrant hit that will demand a sequel and a soda cup at the nearest Jack in the Box. This movie is counter programing to all the big summer blockbusters like "the Avengers" and "Battleship". Nothing blows up, there are no super heroes or aliens or robots. The Best Exotic Marigold Hotel is an adult film with humor, drama and a touch of pathos.

Critics will frequently point out the obviousness of a big action film, but a small adult drama can be just as obvious in the same ways. There is personal conflict between couples, romance that may or may not flourish, and an economic threat to the hotel in the title and all of the retirees. Throw in a sub plot concerning the star crossed love life of the young manager of the hotel and there is something for everyone. All of the plot threads go pretty much where you expect them to, so the surprises need to be in the dialogue and the performances. Luckily for us, the old timers are up to snuff at making some of this entertaining.

Maggie Smith lays on the cheese as a xenophobic former head of a prestigious family house, who is forced to dwell in her own version of hell in order to get a hip replacement that she needs. Will she overcome her racist tendencies, will she find a new purpose in life, will she surprise everyone with a level of humor that is unexpected? Will I spoil it for you if I give you an answer or have you already figured it out. Judi Dench is just as deeply troubled but for other reasons, and we will get a similar character arc for her plus a potential romance. Tom Wilkenson, feels a little miscast for the character he is supposed to be deep down, but as the world weary former justice, with a personal history of India, he serves as a guide for most of our main characters in the early parts of the movie. As an actor though, he is as reliable as ever and does his part to sell the wistful and forlorn victim of the past.

The movie has been beautifully shot and seems to give a real view of what it is like in some of the modern sections of India. There are a couple of characters that keep representing two opposing views of the culture and place. It is beautiful and the people are warm, it is also ugly and the sound of the urban world crushing your senses can be overpowering. Obviously the theme here is that everyone needs to try to overcome their patterns of life. Discovery is still the best reason to go on living. The retirees who find themselves living in India because they can't afford to live at home, must overcome fear and the unfamiliar in order to get something out of the rest of their lives. The young couple has to fight tradition and and family to find a dream of happiness for themselves. Most manage to find their way in the end, and that is not a surprise because that is what the movie wants the audience to leave feeling good about. 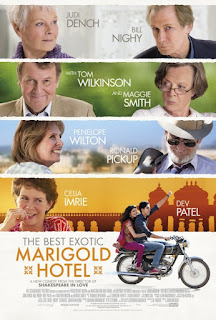 It won't be a blockbuster, but it appears that it is doing very well in the demographic it is aimed at. The Four o'clock show we went to was packed. There were quite a number of laughs from a receptive crowd, and the look on everyone's face afterward seemed satisfied. It was a perfectly nice film, it reminded me of the Movie "Calendar Girls" from a couple of years ago. A decent comedy directed at a middle aged crowd and older, that had enough dramatic bite to it that it feels like it is about something. In the long run all it is really about is two hours. At least it is a pleasant two hours.
Posted by Richard Kirkham at 9:32 PM

I guess I am a 60 year old lady. I loved this movie. I can understand your criticisms and all but I still found the performances to be the best thing about it. Dev Patel was awesome and he carried his own against these old-timers and I did laugh a lot. Maggie Smith's bits of racism were so wrong and yet so funny. Very Downton Abbey.

Thanks for coming by. It would be wrong to punish a slightly mangy dog just because it wants you to love it, this movie is lovable despite the weird fur and occasional snaggletooth.