Frankly I'm not a big fan of Will Farrell. After the first five years of listening to him scream, I lost any sense that it was humorous. "Elf" came out right about the time I started feeling like this was too much. It did manage to channel that maniacal loud voice into something that was a little bit more charming and I remember having a pretty solid reaction to the film. Flash forward 15 years and I went to see it for a second time, this was also a regular theatrical screening, in acknowledgement of the Anniversary. I still enjoyed it, but there were moments that I wanted to look away.

The movie starts and ends with Bob Newhart so it has that going for it. I've always been a fan. It also features a supporting role from Mary Steenburgen, whom I've had a crush on since I first saw her in "Goin" South" in 1978. Finally, it also features Zooey Deschanel, right before she became America's Manic Pixie Dream Girl of choice. She was much more subdued and she has a sweet, slightly flat singing voice that worked perfectly for what she was doing in this movie.

The parts that turned me off are mostly related to eating. The Coke chugging and belch are just annoying but the spaghetti with maple syrup was a bit too far and subsequently, the stakes get raised with added candy, chocolate and then hand shoveling it into one's maw. Definitely not funny and more disgusting than some gore I've seen in a horror film. Just the thought of the gum scene makes my stomach turn. One other thing that did not work for me was Peter Dinklage going all Hulk Hogan on Buddy. Another scene that just misses for me entirely. 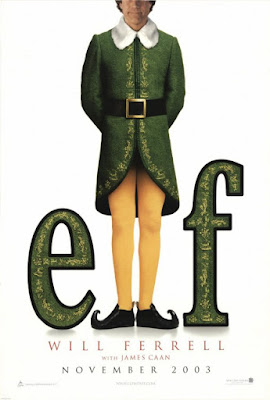 What does work however are Buddy'd antics in the mailroom, his rocket like arm in the snowball fight and the decorating he does. The Toy section at Gimbals was lovely, as was his Dad's apartment after Buddy works it over. The relationship with James Caan feels like there is a scene missing but the emotional payoff at the end still worked for me. All of the cast singing "Here Comes Santa Claus" was just what I could use to help lift my Christmas spirits.

One other scene that works but will probably draw flack from the SJW out there. Buddy is so enamored of Jovie singing that he wanders into the ladies locker room. Not only is that a violation of her safe space, but the song she is singing and he joins in on is now notoriously labeled an ode to date rape. Sorry my friends, the song was perfect and the scene was really a sweet moment of innocence that was awkward because of society's way of viewing the intrusion, rather than the guileless affection that Buddy is showing.  Over all a mixed experience for me, but I was glad to be out of the house for a couple of hours and it is a Christmas movie, so that helps.
Posted by Richard Kirkham at 10:56 PM

I do agree it has those silly burp joke moments that don't really work. But overall this is a Christmas favorite of ours. I'm no big Farrell fan but the sheer absurdity of this thing makes it work.

It has it's charms in spite of the failings. Happy Christmas Keith. Hope all is well in your part of the world.