Do you all remember when action films were being described as a variation of "Die Hard"? You know, "Speed is "Die Hard" on a bus, and "Under Siege" is "Die Hard" on a boat, or the ultimate variation, "Die Hard" on Air Force One. Well it would be redundant to describe this as "Die Hard" in a building, that's what "Die Hard" was all by itself. Instead, lets call this "Die Hard" in the "Towering Inferno" because that is a lot more specific. Don't think that the film makers didn't realize what they were doing either, because they clearly intended us to call back to those other films. 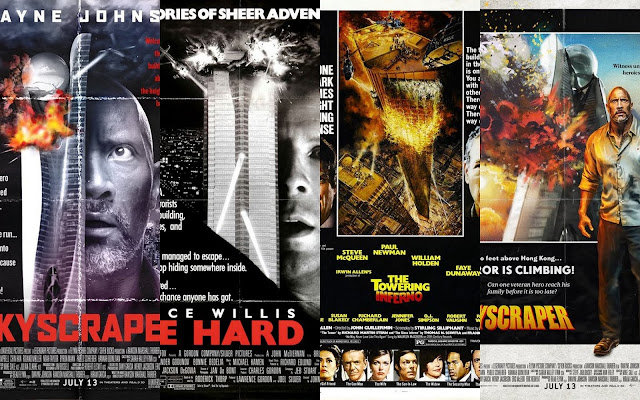 So do you see any resemblance in the marketing of these films?  The key art folks who created the posters certainly did.


This is a bone rattling, eye popping, eardrum shattering popcorn film that should meet the needs of all the adrenaline junkies looking for their next fix.   It is a well put together piece of nonsense that doesn't have to make any sense, it just has to fulfill the expectations for this genre of film. In case you are wondering, here is a partial list of tropes that make this sort of film a "Die Hard" experience:

1. Right Man in the Wrong Place
2. A Family endangered
3. A Violent Crime occurring during the disaster
4. A Loathsome Villain
5. Duplicitous Character
6. Skeptical Police
7. Over the Top Action Sequences
8. A satisfying comeuppance for the bad guys
9. Faith Restored in the Hero

When you have Dwayne Johnson in your film, you are pretty certain to have the right man. "The Rock" as he continues to be referred to, delivers the charisma in big chunks and he gets to be a better actor with each film he makes. When that brief cameo of Arnold showed up in "The Rundown", it really did serve as a passing of the torch to a new generation of action hero. The Rock has lived up to his part of the bargain, choosing roles that fit him for the most part, with occasional comedy misfires like "Baywatch". I've not yet seen this years "Rampage", with the giant animals, but I suspect it fits into the same category as this.

The endangered family include Neve Campbell. I don't think I've seen her in anything since "Scream 4", although I'm sure she works regularly somewhere. I thought she was a nice fit as Johnson's wife, a Doctor with a military background. She doesn't have to do too much that would require her background include SEAL training, for the most part she is a competent mother. caring for her kids in a desperate situation. The kids have a little personality but they are not an annoying focal point as you see too often in these film,s.

The fire in the building is created as a way to get access to a macguffin, which turns out to be a flash drive with important information on it [It doesn't matter so don't worry what it is].  The building itself is described more than it is shown in the lead up to the events that form the spine of the story. We get enough to be impressed with the imagination and engineering, but it might have been more interesting to get a tour of more of the building before disaster arrives.

The bad guy is less satisfying than he ought to be. That is not the fault of the actor Roland Moller. He has one scene where he can inject a little bit of performance, but mostly he has to snarl through the film. There is not any trading of quips as if he is Hans Gruber, he is just another Germanic thug with an agenda. We also get two characters who are not what they seem. You will not have any trouble spotting them early on. The telltale hesitations and the insistent advise they provide gives away their secret agenda to the audience without much work on our part.

The cops in this Asian city are like cops in NY or LA. They are quick to make assumptions, and late to the party. They also require the assistance of both the hero and his spouse.

There are plenty of action scenes in the movie, including a solid fight sequence and some car chases. The criminals shoot everyone, so obviously there is violence but the amount of blood is sparse. What is not hard to come by in this movie is fire. Johnson has so many scenes running through, jumping over and being chased by fire and explosions, that he is lucky he did not singe his beard to go with the shaved head. The highlight is of course the leap from a crane, into the burning title character. While it is visually spectacular, they over do some of the fingertip moments so that they lose a little tension sometimes.

We of course are spoiler free on this site, so I won't do anything with the resolution except say that it is not a surprise, and it minimally meets our wants for this kind of film. This movie will probably not end up a go to film for anyone, but it won't be something you turn off if you run across it on your TV or cable channel. As for streaming, it's had to say what demand there will be for it, but if you are a fan of "The Rock", it will sit nicely between "San Andreas" and any of the "Fast and Furious" movies.

Posted by Richard Kirkham at 1:36 PM

Merry Christmas,
You are so interesting! I don't believe I've truly read through anything like that before. So wonderful to discover another person with a few unique thoughts on this issue. Seriously.. many thanks for starting this up. This website is something that is required on the internet, someone with a bit of originality! If you want to read Christmas Welcome Speech you have to see the link
Thank you,

Hi,
The very next time I read a blog, I hope that it does not disappoint me as much as this particular one.Happy New Year Messages I mean, I know it was my choice to read, but I truly thought you would probably have something useful to say. All I hear is a bunch of crying about something that you could possibly fix if you were not too busy searching for attention.
Thanks