This is clearly an attempt to emulate the success of previous big screen adaptions of TV material like "21 Jump Street" and mix some love that fans have for the original with an irreverent sense of raunchy humor. For the most part I'm afraid that it fails. While there are moments that spark laughter, they are usually connected to our expectations and not to anything original. I suppose that if you spend enough time with a penis and scrotum on screen, being handled uncomfortably by an actor. and others are enjoying the discomfort, then there will be a smile or two. Uncomfortable humor works because all of us are seeking a way to manage the discomfort without being too obvious, and a laugh is a good way to do that.

This is the kind of movie that teenagers should probably love, because the humor is raunchy and the characters are outrageous. The problem is that most teens won't appreciate the "Baywatch"  context and adults that remember the show will be turned off by the vomit, erection and body fluid jokes. Having never seen a single episode of the TV show myself, I still had a sense of what we are supposed to be relating to because the original "Baywatch" was a cultural phenomena that everyone had heard of. I get the slow-motion jokes and the long shots of pecs and asses. It is a beach aesthetic that draws people to the concept in the first place. So why the screenwriters spend so much time on issues that are not connected to what is happening on the beach is curious. The bad guys in the story are so cartoonish as to be annoying. What is supposed to come off as a parody like an Austin Powers film, feels like an incomplete film or a different movie entirely.

I am a fan of Dwayne Johnson. I think the guy has great charisma and a good sense of self. That said, this is maybe his least effective outing in a while. His dialogue is so overloaded with double ententres and mocking pop culture references that they don't usually get a chance to hit. His Mitch never calls the new guy played by Zac Efron by his characters name. He uses a whole series of boy band, pop star and movie or TV references to diminish his new partner. The problem is that there is a new one every twelve seconds and the sting of the previous joke gets buried under the next one which is not quite as funny. The pacing of the movie is all over the place. Scenes that should be quick and too the point get belabored and the ideas that should get more set up are just tossed away. A five minute gag about a guy with his junk stuck in a beach chair is the turning point, after that everything goes soft and that scene happens early on. 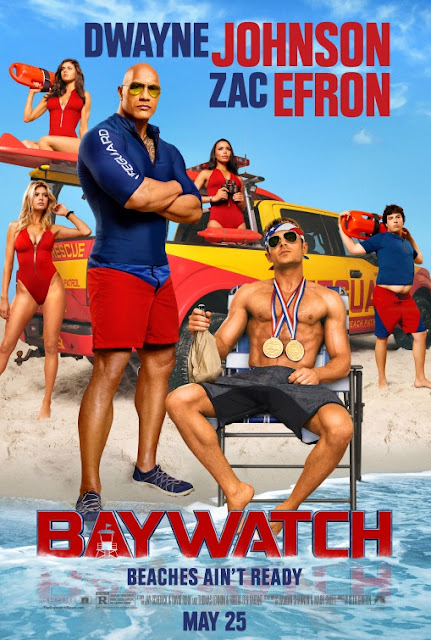 When the titles came out of the water like a technicolor tidal wave, behind our hero as he strides out of the water with a guy in his arms, I was ready to give this movie a hearty endorsement. But it doesn't take long to get out of that mood. Even though there are funny bits of business and satire in the story, the movies tone is just not consistently humorous enough. We are being delivered the jokes through a redemption plot that is too  long and repeats the same points multiple times. Then the film turns into a chase film with comedic overtones, until the punchline turns out to be a fistfight that results in no movement of the story forward.

I've already spent more time on this than it deserves. The movie is a stiff that will disappoint your expectations, if you had any, and surprise you not one bit. There is a generous use of loud hip hop music and the dialogue is frequently punctuated with the "F" word. If that sounds like it is for you, maybe you can enjoy this more than I did. Nothing that happens here makes me long for a sequel or to catch up with the original series. It just sits there and afterwards you have to question what brought you in in the first place.
Posted by Richard Kirkham at 2:35 PM