OK, it's only the end of March but I think I can safely say this will be on my year end list of favorite films. I dig stop motion animation, I have enjoyed more than my fair share of Wes Anderson films, and I love dogs. Going in it should be a no brainer but I had a few doubts because of the supposed allegorical references to modern issues of immigration and xenophobia. It turns out that anyone who wants to find a tenative tie to some modern political issue in a film, does not have to work that hard. People, if you are reading that much into this story, you need to cut down on your caffeine.

The Wes Anderson style is all over this film. You can hear it in the clipped remarks that the dogs make to one another. It is also full of the color palates that he so lavishly uses in all of his movies (or at least the ones I have seen). Much of the interaction has a dynamic and undercurrent to it that makes it feel as if we are hearing two conversations at once, a surface level interface and then a deeper more satirical intercourse. There are also several visual gags that are gruesome and hysterical at the same time. No one could mistake this for a movie made by someone else.

The fact that only Anderson could have produced this film is one of the reasons that I can't take any of the charges of cultural appropriation seriously. While the truth is that he is a westerner telling a story set in Japan, it only matters that it is Japanese for some historical context. The idea that a group of people could be mislead by a nefarious political leader is not uniquely Japanese. The notion of parts of a culture being banished is not Japanese either. I'm willing to give him credit for letting the human characters speak in Japanese without making it seem like subtitles are necessary for every utterance. As I have said numerous times in my classes, "you can find something to argue about in just about anything. That doesn't mean that it is problematic to most people."

The aesthetic of the film is definitely weird.  The flu that the dogs have seems to be an odd contrivance but it works for the story. The notion of "Trash Island", is not all that different than the planet that Thor ends up on in Thor Ragnorock. The fact that Jeff Goldblum is featured in both pictures must be coincidental. The island is a nicely realized habitat that our pack has to navigate to reach an objective. There are complex backgrounds but even more intricate machinery and architecture than one would imagine in a dump. 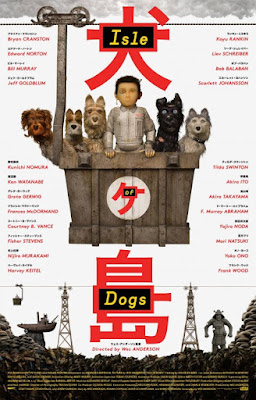 Everything else though is backdrop for the charming story of a boy separated from his dog, and the bonds that humans and animals really do need to be complete. As a dog owner, I have frequently put words in my dogs mouths. Wes Anderson does this for the whole movie and the words are both profound and amusing. My guess is that everyone here will have a favorite dog that he/she will relate to and love. "Chief", "Duke" and "Spots" are my favorites, but ultimately all the dogs are like most dogs, lovable once you get to know them.

I can't imagine the time and talent it took to create the intricate puppets that get used for the stop motion action in the film. I know computer work must also have played a part but even then, something has to be designed first and the art direction and characters in this movie are astonishing. The actors all feel as if they are carefully matched to their characters. Bryan Cranston as Chief manages to be gruff but also winsome in spots. Goldblum's Duke is a never ending fountain of understatement and set up lines, with just the right sonorous tone to make it sound somewhat intellectual. The music combines traditional Japanese flavored drums with more tuneful passages to also add to the environment that everyone in the film is occupying.

Everyone else may have noticed this, it's not a haiku but it is a homophone: "I Love Dogs  "
Posted by Richard Kirkham at 6:34 PM