After a week of serious films aimed at awards season, it was time for an afternoon palate cleanser. There are certainly Twelve Days of Christmas  movies that you can watch, but this season, new films were limited to "Bad Santa 2" (have yet to pull the trigger on that one) and this collection of comedians and comic actors who get a chance to act out for a couple of hours. It is exactly as stupid and meaningless as it looks in the trailers. Although it wants to be a holiday "Hangover", it is mostly mildly amusing and in bad taste.

Jason Bateman has the straightman role once again, Jennifer Aniston plays a bitch, and everyone else manages to fit their character stereotype without having to work very hard. An IT company is closing down some branches, and rival siblings of the late company founder have different attitudes about it. In order to land an old school tech client, looking for a unique company, the current managers of the branch scheduled for closing go all out in order to throw a raucous Christmas party, to show their family ties and creative spirits.

The film plays on every fantasy of old school holiday parties you can imagine. Drunken confession, c 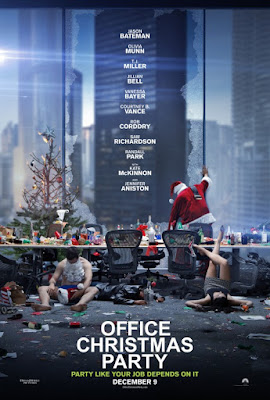 heck. Photocopies of private parts, Check (plus an update with a 3D printer). Casual, ill advised hook ups that lead to awkward day after exchanges, you betcha. Throw in a hooker, a bunch of cocaine, and some loose cash and you have the movie.

It won't rot your brain, but it will insult your intelligence with fart jokes and physical humor that defies the ability of modern medicine to repair.

I had popcorn, Coke Zero with both lemon and lime, and three or four chuckles. This film will never be on anybody's Christmas Movie Draft List,  and it will be forgotten by the time the New Year gets here. Everyone earned their pay, and I got out of my wife's hair for two hours. Merry Christmas.