I don't know that many movies can live up to one's expectations when you have been amp-ed up for a year. The anticipation I felt for "Prometheus" was much like that of a kid with Christmas just a couple of days away. Once all the presents have been opened, the sugar rush dies down and you begin to assess the outcome. There is so much about this movie that I liked and can't wait to experience again, but there are also some elements that feel incomplete to me. This is an incredibly intelligent, well made science fiction horror story. There are some big questions that it asks and the answers are not as complete or satisfying as they ought to be. There are several harrowing and horrifying moments in the film, but just as tension starts to build, there is a shift in story focus that makes the flow of suspense feel less powerful than it should be. I have done my best to avoid knowing too much about the story and as usual, my comments will be about the film making and story telling, without giving away any important plot elements. I will say however, that the connections to the "Alien" universe are tangential. You need no familiarity with that series to enjoy this film. There may be some satisfying speculation at the end of the movie about how all of this ends up connecting the stories, but that is not the issue that anyone going to see this should focus on.

If you just watch the trailer, you will be able to see that from a visual point of view, this movie is amazing. There is some incredible imagination that goes into the imagery of the planet that our explorers visit, and the tools they used were innovative and based on some clever future visualizing. The ship "Prometheus" is itself, a wonder to behold. The exterior design is rugged and at the same time practical in a way that some engineer with too much time on his hands might come up with some interesting solutions. The concept of the probes that the geologist character in the story refers to as his "pups" is also one of those things that seems to make sense even though we do not have the technology available. There is a medical capsule that would be at home on the Star Ship Enterprise, that is if Dr. McCoy was demented and uncomfortable with a human touch being part of the healing process. Some of this technology is closely tied into the horror elements of the story and so I don't want to say too much.

The greatest technical innovation in the story line is the android "David". There is inevitably going to be a problem when robots are involved. I can't think of a science fiction film, that had robots as a part of the story, in which the robots were simply part of the background in the universe. If a robot is in a humanoid form, it is almost always going to be an issue for someone in the story. David is a great character, despite the absence of any obvious human emotions. Our feelings in the movie in regard to events and other characters is often determined by the way David approaches their presenter in the story. Androids are not good or evil, they are programmed. David sometimes gives off the impression of being emotionally and intellectually superior to the humans on the mission, but those hints of personality simply reflect the character's own expectations. There is a scene in which David and Charlie, one of the lead scientists, engage in a discussion of theology, and it is clear that David is simply reflecting back the attitudes he is perceiving from Charlie during their conversation. It does not make it less creepy but it was a subtle way to to make Charlies opinions less than hopeful.

If there is a failure of emotional elements in the story, it starts with the relationship between Charlie and Elizabeth. She is Charlie's lover and the other main scientist/hero of our story. Their connection needed to be stronger early in the film, and it does not feel as important as it should be in the later spots in the film. She is just intelligent enough to ask good questions but she was not emotionally invested in the relationship until it felt a little late in the process. The relationship she had to their mission was more clearly realized. Charlie on the other hand, starts off as an enthusiastic leader of the mission, but somewhere on the expedition, he becomes a disillusioned alcoholic for no reason at all. When he and she should be comparing notes and arguing over their discoveries, we instead get some sullen reflections from him with other members of the crew. Vickers, the no nonsense manager of the expedition is an enigma until later in the story. That makes some sense if we get more about the revelations at the climax, instead, we just have another character with some background that should be more involving.

There are two or three very good terror sequences, each of them with some good visualizations to give us some nightmares. My daughter, who was as pumped up for this movie as I was, felt a little let down because it was not as scary as she was expecting. Part of this is the problem with expectations, but part is also due to the lack of character development for most of our cast. David and Elizabeth are the only characters that get much chance to develop a personality that we would care much about. We need more investment in these people for the horror to be meaningful. Without a context, they are simply images and that is not enough to racket up the anxiety quotient to the heights we achieved in Scott's original Alien and the Cameron directed "Aliens". These sequences will get you but not in the same way as Kane's chest bursting or Dallas' demise in the ventilation shaft. There was a pretty good set up of one scare sequence with some secondary characters, and the good humor and personality that came in putting that moment together needed to be repeated in other spots in the film.

There were some good surprises in the story. The search for our past is not the only motivation for the expedition, that will probably not be a surprise, but the actual motivation will be a bit of a kick. Both the Charlie and David resolutions are nice and dramatic as well. The pacing of the movie felt right to me, you don't want to plunge into action before you have some background, but not everyone in our group agreed. We did all agree that once the events on the alien planet start unraveling, the movie does indeed take of and is at it's most effective. There is another little treat at the end of the film as well, so we can see how much of what has gone on before us will play out, even though we will not witness it. There is a possibility for a sequel, I don't know if one is necessary but it would probably be welcomed as a chance to further explore the ideas and story lines raised in this film. 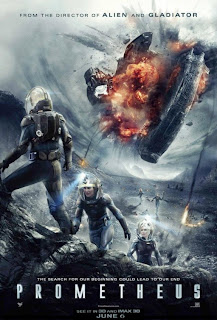 The theological implications of the movie are not resolved and there is plenty of room for speculation. I liked the fact that the movie takes a point of view and runs with it, although the fact that our team runs in the wrong direction does provide us with some room for thought. Those elements of the story are not ponderous, the way they have been in films like "2001" or "tree of Life". We are pushed into the story by a desire to answer the unanswerable and the result is an exciting action film. The horror elements work, but are less intense than you may be expecting. Oh, and for the second week in a row, Charlize Theron is overshadowed by the visual elements of the movie that she is starring in. "Prometheus" is as provocative and amazing looking as you could want, but the horror elements don't always live up to the hype. I am looking forward to seeing this again so that I can put my perceptions to the test a second time. If you have an interest in the movie, I think you will be satisfied, and if you have no expectations I think you will be thrilled.
Posted by Richard Kirkham at 3:07 PM