If you have ever spent time at a college with a cinema department, you have probably seen some student films that have a clever idea and run just a few minutes. They can be frightening, hilarious or perhaps poignant. Those films usually benefit from a tight budget which forces creativity. They are also strengthened by a dedicated crew of film makers, that are anxious to show off what they can do. Some student films have been adapted to the big screen over the years as commercial projects, the most famous of which is probably George Lucas's THX 1138. The movie I saw today, feels like a student project, that has been fattened up and extended to make a theatrical film. It suffers from the same problems that any good idea is subject to, too much of a good thing.

Rubber is at it's heart a horror movie with a ridiculous premise. An old tire becomes animated and can kill with the force of it's concentration. Watch the trailer above and you will get the idea. There is inherent humor in the notion of a tire wandering across the desert, looking for meaning, but it is even funnier when the tire has a killer psychokinetic personality. There, that's your movie idea, and it can be done in a twenty minute or less film and have a great memorable impact. Here, it is almost ninety minutes, and it is undermined by a mixture of satire on movie going (maybe at the expense of the very audience that might embrace such a film), drama involving unrequited love, and then comedy featuring the cast from a minor league version of Reno 911. 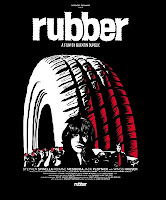 I will be honest, I laughed several times. There are some good jokes in the movie and there are several actors that play their parts just daffy enough to get away with some pretty stupid stuff. The problem is that it is all an exercise in meaningless audience manipulation. As soon as we get set for one consistent idea, the movie veers off on another twisted loop and as the film makers themselves would say, "for no good reason." There are some movie conventions that are observed, and others that are subverted, but it is entirely arbitrary as to which one will be next. I can't say I hated the movie, it was not terrible and at times I was entertained. I can say I was frustrated by it because there are so many potentially great ways the movie could go, but it never follows up on any of them.

If you are a regular reader, you know that I like exploitation films as much as the next person. A little crap is a good way to clear the mind and remind yourself what makes real movies so valuable. I enjoy creativity, but the direct approach is often the better way to go and this is one of those places where directness would have succeeded more than what is finally given to us. "Drive Angry", "Snakes on a Plane", "Machete" or even "Sharktopus" tell us what we are getting and deliver on the promise. Sometimes those films get sidetracked and they lose something as a result. "Machete" is a good example, an exploitation picture that features gratuitous sex and violence, got bogged down by a pseudo-political theme that did not belong in the movie. Rubber is a horror comedy that makes the mistake of trying to break down the fourth wall between the film and the audience, and instead becomes less than it should be.

Not all of the parts fail, in fact taken on their own, they might make good ideas for other films. I got the impression that the film makers did not feel like they would get another chance at financing, so they went ahead with all the ideas they had, even though they do not go well together. If you are intrigued by the trailer and the poster, go ahead and see the movie. My advice though is to catch it this week on the free preview being offered on HD Net You don't have to pay for parking and if you hate the movie at least you did not pay to see it.
Posted by Richard Kirkham at 7:04 PM