I am not sure why this movie was released the last week of August. It is a quality piece of film making with a thoughtful theme and delicate performances from the two leads. This feels like a Spring or Fall release, not something that you dump with the action/horror trash that makes up the usual fare at this time of year. When the Lion in the MGM logo that came up in front of the film did not roar in the traditional way, I wondered what was happening. Maybe someone at MGM decided it would be triggering, or maybe that Idris Elba had enough lion roars from his film out just two weeks ago. It did make me question the thinking at the studio, and after seeing the film, I believe I was right in thinking someone in marketing has screwed up.
George Miller has been responsible for some odd films over the years. The two "Babe" pictures run in the opposite direction of his Mad Max films, and "Happy Feet", the less said about the better. "3000 Years of Longing" is a non-traditional narrative about narratives. Alithea, the subject of the initial story is a character who studies, records, interprets and investigates literary narratives. The idea that this person should be the one to discover the story revealed when a Djinn gets released from his captivity is a good one. By making her the receiver of the story, she can stand in for the all of us as skeptic and captivated audience. Idris Elba as the ancient Djinn with a story to tell is a more compelling character than the doctor he played in the recent "Beast". It feels odd to have him in back to back weeks as the lead of the major film opening that Friday. The character here is more compelling and he requires the skills of an actor to keep us enthralled in the story.
This movie reminds me of a movie from almost thirty years ago, Wayne Wang's "Smoke". The subject matter is completely different, but the films both feature narrators telling stories that pull us in. The stories may not be essential but they are compelling. What Miller has done is ladled on the visuals to go with the stories that our protagonists are sharing. This works especially well in the setting of the hotel room in Istanbul. As the two characters converse and we see the story being told by the Djinn with magic, color and incredible visual detail. Solomon's musical instrument, the concubines of the imbecile brother who will become king, the inventions of his greatest love, all are amazing images that Miller and his team deserve credit for. The three stories told in this sequence are fascinating, but sometimes they feel arbitrary, like they have to evoke the cautionary tales of wishes being granted. The problem is that the rules seem inconsistent, and that matters because when the location of the story moves to modern London, the film runs out of steam and it does not have a clear set of rules to fall back on. 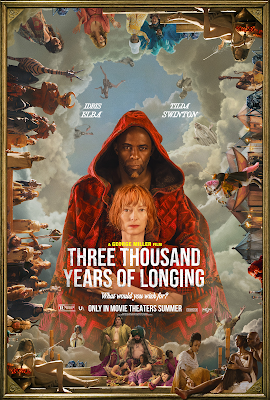 Tilda Swinton plays the most normal character I have seen her as in a movie in a long time. Her career justifies her willingness to engage in the stories, but the change in her desires at the close of the middle section was abrupt, and the ground rules were ambiguous, in spite of her exposition then and at the end of the movie. As I look back on the film, I see some foreshadowing of the final outcome that I noticed but did not connect to the story. That's because we get side tracked in a totally superfluous side story about a couple of busy body old ladies living next door. Their only reason for being there is to provide a completely unnecessary woke moment, but as a piece of misdirection, it works to make the Djinn's physical shift a surprise.

In the end, I was glad I saw the film and I liked the slightly melancholy happy ending. The plot is supposed to be told to us as a fairy tale, so I suppose that can excuse some plot contrivances and holes in the logic of the story. I mostly did not care because the two leads engaged in conversation, with the advantage of a visual palate to complete the stories that are being shared, was compelling enough for me. It may be a languid trip for some, but it was a pleasant journey with a nice fairy tale feel.
Posted by Richard Kirkham at 10:29 AM