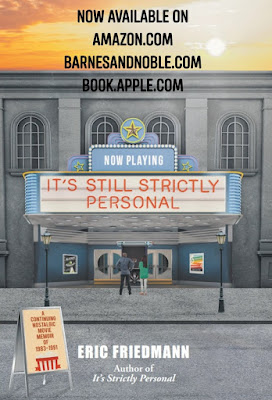 It's been two years since my on-line friend and fellow blogger Eric, published his first book, "It's Strictly Personal". I thoroughly enjoyed it and would recommend it to any of my readers as a way of looking at movies in a slightly different perspective. As I said at the time, it's an autobiography of someone that you don't know but it is a story that all of us know. Eric has attempted to talk about movies in the most personal way possible, by showing us the things that the movies he loves say about him. Anyone who is a movie lover will be able to relate to this concept.
The time has arrived for the inevitable sequel. It is a bit ironic since Eric frequently has distain for Hollywood's insistence on repeatedly going to the same well. The dearth of creativity in film making is one of the points that the author tries to convey in his work. However, there have been plenty of sequels that are worthy and even occasionally outshine their predecessor. The question in today's review is whether he has managed to do with his second book what others have failed to do with their second bite of the apple.
Comparisons are always problematic because the things being compared are going to have differences and the fear that apples and oranges are being looked at the same way is a real one. "It's Still Strictly Personal" is different from the first volume in some important ways and I think those differences matter to a large degree. The original volume is heavy on nostalgia for the era that the films discussed were released in.  There is a childlike enthusiasm for going to the cinema and experiencing the culture in a new way for a kid. Eric's first book centered on his life from eight to sixteen, when, in spite of some family turmoil, childhood remains a fairly innocent time. The neighborhood kids that you were friends with and the adventures you shared with them seeing movies in a theater or surreptitiously on cable after your friend's parents went to sleep seem warm and fuzzy memories. When we get to high school and college however, all bets are off. I'm willing to guess that most of us experienced the greatest degree of upheaval, personal drama, and emotional tragedy in our adolescent and young adult years.
This volume of the autobiography is a more challenging read because we have to identify with someone who is struggling to find himself as a person. The thing that makes this story relevant to us is how the author manages to use the movies to accomplish that. The simplest example I can think of from Eric's story is the bookend films that match up with his parents turbulent second shot at marriage.  "Kramer vs. Kramer" and "The War of the Roses" are not stories with soft landings. Even though the former has a hopeful conclusion, it was hell to get there. Ten years later, Eric sees the later film as being particularly relevant if not exactly literal, to his families own circumstances. The analogous emotional upheaval in these stories is how Eric relates to us, and he finds movies as a key to the cipher of growing up.
The eight year period this part of the story covers includes for instance the teen focused works of John Hughes. Teens could relate to some characters in those films. You might see your life as being parallel to John Bender, the sullen outcast from "The Breakfast Club". It's possible you admire the gumption and attitude of Ferris Bueller as he outfoxes the school authorities and his parent in pursuit of a perfect Spring Day. Eric doesn't accept any direct connection to a character, but he does see the shy and awkward Brian, the so called "brain" in detention that day, as someone he does share personality traits with. All of we movie fans have seen those kinds of connections. When we see part of ourselves on a movie screen, we are being exposed to that section of the Johari Window that is referred to as the blind area. Movies let us in on who we are sometimes, without us even being aware that that is who we are.
Over the years that I have followed Eric's Blog, "My Movies, My Words" , he and I have agreed on many films. There are of course some movies that we have very different thoughts on, and those examples in the book are some of the things that make this read more challenging. Eric never apologizes for his opinion, why should he, that's how he feels. There are times in the story here however when his distain for a film seems to not be limited to the movie but to the people who have made the film and anyone who actually enjoyed it while he did not. Part of this comes from the experience he was going through at the time. If your romantic life is frustrating, that may bias the way you view an actor or story.  Eric's book is organized by films as the chapter references. He has Eighty six movies that he talks about in some detail, I have seen all of the films he mentions except four. We are simpatico on the vast majority of them. There are however eight or nine that I feel quite differently about than he does. Nothing wrong with that, but sometimes the negative view he has of a movie is flippant, and I don't always see how it adds to our understanding of his personal growth. Usually, these are just minor incidents rather than major events in his story, so I sometimes think they might have been left out and then I would be able to accept the rest more easily. Let's not forget that for the reader it is personal also.

I like the fact that Eric ties events in his life to the movies that he is seeing. Sometimes they are moments of revelation, such as discovering a foreign language film that moves you when you have not been immersed in that world before. I appreciate when he connects the dots between a film makers style and the movie he is writing about at the time. Often the movie is just background for the personal story of his college years and disappointing romantic entanglements. Even if you are indifferent to Eric as a person, which I don't think I can be, you will still find merit in the story he tells about the times. I think he is honest as hell about the women in his life. That sort of thing matters so it is relevant. I did sometimes feel short changed by not hearing more about the friends in his life. I know some of their names, but I don't always feel like I know how they influenced Eric. A couple of exceptions occur when he has a vastly different reaction to a film than his companion does, and I wish I'd been more of a fly on the wall for the conversations he had with them about the movie. The problem is that he is in his fifties, recalling events from before he was twenty one,  and who can remember what we said over coffee thirty plus years ago after a night at the movies?

One of the most unusual reactions I had to his story came from a movie that his family saw together several times, and that I would require a big incentive to sit through again. "The Woman in Red" is a small blemish on the career of Gene Wilder. I dislike the film but I do like how Eric explains his families fascination with it. I like that his folks wanted to sit through it a second time. Whenever I went to the movies with my family, and that happened, it was a special moment for me. A story like this is a bit like watching the lives of your neighbors through the living room window. We get a glimpse into how others live, and it is often very different from the way we live ourselves. That's the value of a book like this. I never lived in Manhattan, I never had to trade schools midway though my education, I never went to summer camp for weeks at a time. This is a life very different from mine, but I still understand it because movies let us share references and feelings and the ability to empathize is enhanced as a result.

Someday, Eric and I will meet in person. I hope we can take in a James Bond movie together and then talk about it afterward at a diner that he knows or a Mexican restaurant like El Coyote. We are movie lovers who tell the story of our life through the films that shaped us. I feel like we are old pals because I know his history of hurt and success. Life is not all sunshine and cupcakes, and we all have to grow up. "It's Still Strictly Personal" let's us see how we are doing that. And there were movies...

Posted by Richard Kirkham at 1:48 PM

This sounds like a really good book series. I would love to read about his life connections to different movies. I plan on ordering copies later

Every film fan can relate. You will wish you were writing your own book.