The drought was over last weekend, when I went to a theater to see a movie. after five long months of Covid-19 closures. That movie was " Jurassic Park" a film that I've written about many times already. So there was not really a need to have an in-depth look at that film. This week however, I am celebrating a new film, being released in theaters and it is fresh for comment, "Unhinged". This is a brutal piece of exploitation film making, featuring a major star in a basic plot, which gets a few nods to social relevance, but it is really designed to screw up the tension level and cause you periodic moments of revulsion. In other words, it was a great movie for me to get back to a theater and blogging.

Russel Crowe is the great white shark in this movie. I mean that figuratively for the most part, although his physical presence in film in the last decade have in fact suggested that Quint was right in assessing the weight of the opposition. Crowe plays a character listed in the credits as "The Man", an interesting coincidence sine the last film posted on this site "The Naked Prey" also features the same credit for the lead actor. Ay one point the character introduces himself as Tom Cooper, so I'm going to refer to him by that name for the rest of this entry. Cooper is a disturbed man, who we know immediately is going to be trouble. There is a pre-title sequence that establishes with violence from a distance, that Tom has lost all sense of proportion or reasonableness. This may work against the story a bit in the long run because we are never going to listen to the perspective he articulates and the background set up in the title sequences will become irrelevant. Tom is a bad man who can feign politeness for a few moments but ultimately will reveal himself as a lost monster.

Actress Caren Pistorius has to carry most of the film herself by reacting to phone calls and traffic encounters. There are a few moments of human interaction but they pass by pretty quickly. This movie is likely to do for road rage acts of expression, what "Fatal Attraction" did for extra-marital affairs, scare the potential bird flipper away from such emotional outbursts. Although there is a self righteous payoff line at the climax of the film, the real coda happens a few minutes later when Caren is reminded of how this whole day turned into a nightmare for her in the first place. I don't think we should all assume that the worst possible thing that could happen will be the most likely thing to happen, but a little perspective is not a bad thing. Unfortunately, because we know from the start how awful the antagonist is, that perspective will not get a hearing.

Trying to turn a road rage incident into a movie is possible. Spielberg did it fifty years ago with "Duel".  This script however goes in some very different directions based on the level of privacy we give up by using smart phones. I can't say what technological innovations will make those plot devices irrelevant in twenty years, but there will certainly be something. Like people today who laugh at classic films that use the absence of a phone in a remote location as a plot device, someday, the content of phones will seem like an antiquated tool for storytelling.  The movie suffers from a few of the traditional plot holes that these sorts of movies suffer from. The main protagonist makes some dumb choices, the villain has prescient sight, and abilities that are far deeper and quicker than the average person can manage. The cops, who in real life have helicopters chasing drivers who run after a bad traffic light call, can't seem to get it together enough to track, pursue and capture a man that has committed multiple atrocities and continues to do so. This is movie story telling, not the real world.

Let's put all that aside for a moment. Crowe plays the maniac with enough range to make the character somewhat compelling. The vehicle jump scares and action beats are always effective, and the resolution meets our need for retribution and recovery. It's not a great movie, but it came at a great time for me. I can't stay locked down forever, and escapist fare like this helps quite a bit. And as this poster tells you. I saw it in a theater. 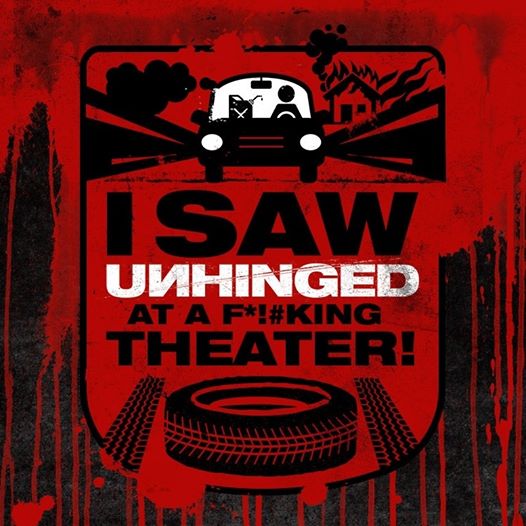 Posted by Richard Kirkham at 3:26 PM