Probably everyone goes through a part of their life when every decision we make is a bad one, no good turn goes unpunished, or simply we string together a series of hardships that make our lives seem worthless. I've heard that the holiday season is also the season where there is the most depression, because in part, we are surrounded by good feelings that we don't share in as much. Sadness about lost opportunities and relationships get magnified by the cheerful goings on around us and as a consequence, the down feelings get exaggerated. Now, imagine that you have some of that sadness and you are immersed in Christmas all year long. That is the premise of this romantic comedy/drama starring Emilia Clarke.

Kate (Katarina as her Mother prefers) works in a shop that sells Christmas items all year long. Everyday she is dressed as an elf and encounters people who are in a good enough mood that they will shop for unusual Christmas ornaments, even in the summer. The problem is, a year before, Kate had a medical emergency. We are not told exactly what it was in the early part of the film because that would tip off some of the turn that is coming at the end. Frankly, when it did get revealed, I started to immediately wonder how it was going to connect everything. I will admit I went in a different direction in my thinking than the script does, but not too far away, so the story does have a bit of logic to it. I do think it is a bit of a cheat but I am very forgiving of those things with a movie that wants nothing more than to make you feel good. Anyway, Kate's medical procedure has left her an em optional wreck, capable of doing dumb things and completely ignoring the destruction that is left in her wake.

In a way, this is another retelling of a "Christmas Carol", where the spirit of the holiday is called on to redeem a person who has lost their way. Henry Golding plays Tom, a man who appears in Kate's life and seems to be pointing her in some different directions. His character is not exactly the opposite of hers but in a ying/yang way he compliments her needs. Tom is meticulous, graceful and always looking for the bright side in things. The mess that Kate is making with her life needs some of that direction. Kate has friends but she is burning through them as a way of avoiding her Mother, an overprotective and equally thoughtless woman. Emma Thompson plays the mother, she also co-wrote the script for the movie. Her character could be a villain but it turns out she is just as lost and depressed as Kate is, just in different ways. 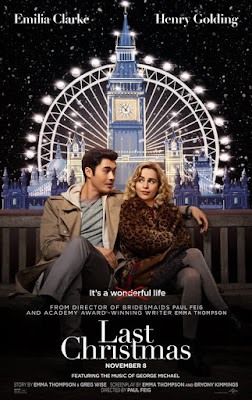 The movie is filled with characters that we can enjoy in small amounts without taking away from Kate's story. The crew and clients at the homeless shelter where Kate ends up spending time are probably a little "too Hollywood" homeless, but it is a Christmas movie and we don't want to be confronted too much with drugs and mental illness. Kate's boss is one of the great pleasures of the film. Michelle Yeoh is "Santa" the owner of the shop where Kate works. She appears to be flinty and judgmental of Kate's life, but it turns out she has deeper thoughts about Kate than anyone else has managed to express. She also just needs to be prompted to let her soft side out, and when it does come out, it is a joy.

Every year we get holiday films that try to move us and inspire us to be better people. This movie wants to be "Love Actually", but it does not quite reach those heights. It does however try in a sincere way to be that kind of movie, and it's shortcomings are small enough to be forgiven. "Last Christmas" may not be a perennial film for everyone, but it is pleasant enough to start the holiday season with. It also manages to make the Wham/George Michael song tolerable for an hour and forty minutes, and that is some kind of accomplishment.


Posted by Richard Kirkham at 8:40 AM

I still haven't seen this specifically because of this silly, self-imposed "No Christmas Movies Until After Thanksgiving" rule we have. Still hoping it sticks around another week or so.

That's a good rule in general, but if you wait it will be gone.