Bad Times at the El Royale


A few weeks ago on the Lambcast, I mentioned this film as one of my most anticipated of the Fall season. That it opened on the same weekend as "First Man" and I still have not seen that film, is a testament as to how great my interest was. It has a compelling cast, an interesting setting and the trailer hints at violence, double crosses and surprises that will delight us. For once the ads don't lie. This movie has a whole set of twists and turns that are character based rather than plot conveniences. The narrative is non-sequential and as a result build tension but releases that tension in very unexpected ways. There was only one moment that did not seem true to the story, and it gets explained in a less than satisfactory manner, but this was a minor quibble in a film filled with unexpected treats.

The set up is slow but it reveals character secrets in a sly manner that keeps us guessing and anticipating. Some characters seem likable to begin with but turn into something else, others are obnoxious but have something valuable to them anyway, and all of them are only connected by the fact that they are at this one particular location. The "El Royale"  may be modeled after the Cal-Neva club in Lake Tahoe. Stradling the border of California and Nevada, the club was a resort for the celebrity class but also an investment by shady characters in the underworld. Frank Sinatra was an owner of the club and some of his friends in the organized crime world had dealings with the gambling and celebrities. None of that comes up directly in the story, but it is strongly hinted that the resort in the film is owned by the underworld, and even though they have lost their gambling license they still have ways to make the investment pay off.

After the arrival of the guests at the hotel, the story slips from a chronological structure to a series of flashbacks centered around each of the occupied rooms at the mostly empty resort. The characters are revealed by room number and the back stories are filled in. There is a criminal seeking a hidden cache of cash that we learned about in the opening of the movie which was set ten years earlier. A vacuum cleaner salesman appears to have a bug problem and there may or may not be a kidnapping taking place. The script, written by Director Drew Goddard, is not unlike his previous film "The Cabin in the Woods". It turns a series of seemingly unrelated character pieces into a whole by the end of the movie. In my opinion this was much more successful at making the twists work because the film is less gimmicky and relies on the characters so much more. Jeff Bridges is the biggest name and his role gives him a chance to stretch a few muscles that he has not relied on in a number of years. While he is playing a grizzled character, it is one imbued with a odd sense of defiant melancholia. Cynthia Erivo plays a down trodden singer who is a lot sharper and world wise than she at first appears. She is also a remarkably good singer who manages to make a couple of scenes work really well as a result. Jon Hamm's character is confusing at first and aside from some potentially insensitive racial comments might be viewed as a good guy in all of this. The film is set approximately 1970 but as I said, it trails back at times to story threads from a decade earlier.

Dakota Johnson keeps her clothes on in this film and is reasonably well cast. This movie mixes the gangster story with a horrifying twist on a late sixties nightmare of a Manson style cult. Such a cult requires a charismatic center who seems to make sense but is even crazier than the world he thinks himself to be, enter Chris Helmsworth. It's not hard to believe that lost souls could fall under his spell and when we get to the question of real evil in the story, he leaves no doubt where it resides. The director wisely lets us imagine some things about the back stories which may actually be grimmer than what we see on the screen. If there is a revelation of an actor in the film, it is young Lewis Pullman,  who as a bell/captain manager of the hotel, has secrets he is actually desperate to reveal. If any of the stories are under developed, it might be his, but I only think that in hindsight because I suddenly want to know more, not because I need to know more. 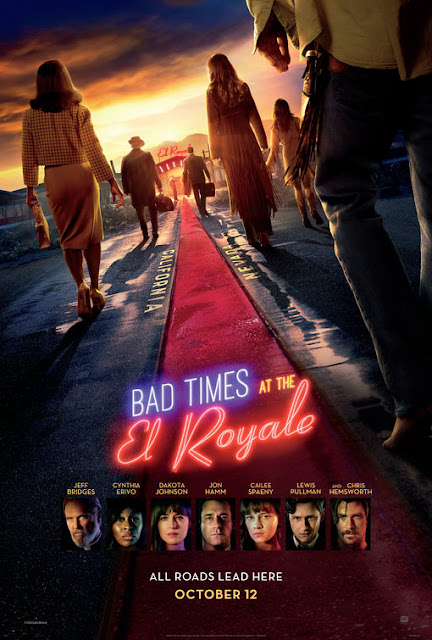 Comparisons to Tarantino films are inevitable because of the crime milieu, the non-linear story telling and the sometimes humorous dialogue that the characters exchange. There are sudden moments of violence and characters that we have come to connect with may turnout to be mistakes or to be short for this world. I think it was all well balanced as a story but it kept me off balance as a viewer. The casino setting and the time period are great ways to make the story feel more real since characters like this have to exist in another dimension anyway, but it still has to be one that is familiar. It also then justifies the use of a whole lot of great music as background as well. This is a show piece for all concerned. The actors get to sink their teeth into characters that will be completely memorable, and the director gets to show off his style while entertaining us and keeping us in suspense. As far as I'm concerned, it was a "Good Time" at the El Royale.

Posted by Richard Kirkham at 6:38 PM