I have a huge sense of Deja Vu with this picture. The advance screening we went to last night is foreshadowing some potentially unpleasant news for the studio that invested in this sequel. This is a movie that has been promoted all to hell, and at a 9:00 screening there were maybe two dozen people in the theater to see it. When I asked at the concession stand about the crowd that evening, the two girls said that there was a big crowd earlier, but they were all coming to see "Mully" , a specialty release. The employees didn't even know what Blade Runner was. Thirty-five years ago, we went to an opening night screening of this new Harrison Ford film, and in a giant one thousand seat theater, there were maybe three hundred people. The 1982 Blade Runner tanked, and although it has a strong cult following and an impressive revisionist legacy, I'm a little concerned for how this new edition will do.

Director Denis Villeneuve was responsible for last year's "Arrival" a film that placed highly on my end of the year list and the promise of Ryan Gosling and Harrison Ford cemented this as one of the most anticipated films of the year. At least for cinema fans, as we are learning, there are fewer and fewer of us out there as every new movie platform launches. I hope I am wrong, because this is a solid film and deserves a wide audience, but I will understand if it follows it's predecessor down the path of box office failure but cinematic glory. In many way it has the same strengths and weaknesses of the first film.

Blade Runner 2049 starts off with a cinematic technique that is not very encouraging. We get a title card with four paragraphs of exposition, moving on to the screen accompanied by the ominous score. If the film has to tell us what is happening instead of showing us, that is a danger sign. This movie doen' even have a narration or character tell us the information, we have to read a preface. Once the story gets started however, things look a lot more promising. Actor Dave Bautista, who is rapidly becoming a favorite of mine,shows up in the opening section and there is a piece of action that seems about right for the start of the movie. The updated technology of the spinner car is displayed in bright light rather than in rain and the dark, and a mystery is introduced. So far so good. The follow up on the mystery is not so good. We do not ever understand exactly the relationship of Bautista's character to the rest of the story, In fact, it is a red herring but a very confusing one. This is just the start of a great deal of muddled story that detracts from the characters and helps make the visual splendor of the film it's main selling point. [This should start to sound familiar to all you fans of whatever cut of Blade Runner.]

"K" the Gosling character, is a different kind of Blade Runner. We find out when he first encounters his targets and that ask him how it feels to hunt down his own kind. I don't think this is a spoiler since it comes up in the first few minutes of the film. His supervisor, the frighteningly stern Robin Wright, treats him only slightly better than a vacuum cleaner, although she clearly sees his utility and respects his work. Their relationship is set up like the traditional over bearing police supervisor and rebellious underling, except that "K" doesn't really rebel and Wright's "Madam"  doesn't below as much as she scowls. They both participate in a reworking of the digital picture enhancement scene from the original film, and later Gosling repeats the procedure again in an outside context. Some more echos of the first film.

Very much as "The Force Awakens" mirrors the first "Star Wars", 2049 is hitting some of the same beats as the original film more than three decades later. "Luv", the assistant to the owner of the company that makes the replicants which are now more compliant than their older versions, is a combination of three of the characters from the first film, Pris, Zhora and Roy Batty himself. Ultimately you will hate her but there is a strange attractiveness about her methodical manner and diffident smile. Niander Wallace is the blind genius behind the new version of the Tyrell Company, and since he uses floating electronic eyes to see, he feels like a combination of J.F. Sebastian, Chew, and Tyrell himself. He speaks in obscure terms and platitudes. Jared Leto comes across as creepy villain but one who will rely on his creations to carry out his dirty work.

There are three or four plots going on all at once, but they don't always gel into a coherent story. "K" loves "Joi" a virtual reality companion. Luv is protecting "K" at times and attacking him at other moments. Lt. Joshi, referred to usually as Madam, seems to be aware of a plot, but unwilling to pull the curtain back to reveal it. There is also the thread of a replicant revolution in the offing. The procedural of following leads is sidetracked by new sub-cultures or  background world building that gets more and more obtuse. It may all ultimately make sense but it will probably take the average person two or three viewings to figure it out. The question is whether anyone will be motivated to do so. This movie is almost three hours and it is not a fast three hours. This again mirrors the original film, which was deliberately paced and not action heavy. There are lengthy discussions between characters which are often meant to be so high context that the audience might well believe they are supposed to be excluded from the conversation.

So far it probably doesn't sound much like I enjoyed the movie. In fact I did and it is marvelous in a lot of ways. I just want to be out front in pointing out that the story is problematic and the script not very engaging. What is engaging however are some of the performances, the great visual design of the film, and some of the world building that was only hinted at in the first movie. The combination of effects and characters are fascinating in several places. There is a great scene when a pleasure model replicant and  the virtual reality companion, share space so that "K" can have a tactile relationship with the object of his desire. It was a great creative moment and the effect looks a little like a misaligned 3D shot. The set designs in the future abandoned Las Vegas are also pretty spectacular. Hinting at the future of our current obsession with drinking, gambling and old time entertainment. 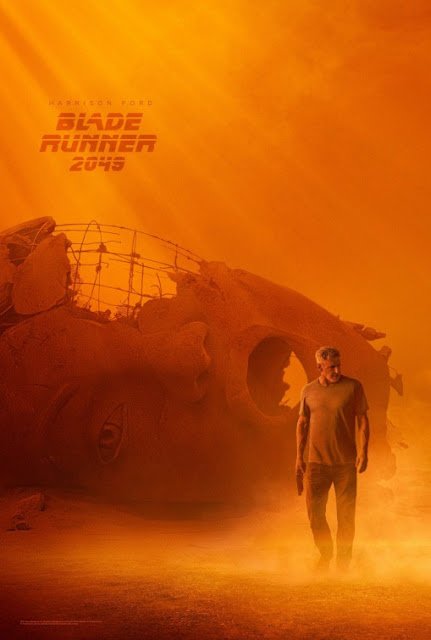 The women in this film make the strongest impressions. Villeneuve manages to make an initially lovely villainess more and more reptilian as the story develops. actress Sylvia Hoeks provides a face that is made for molding into beauty and fear at the same time. Ana de Armas is the virtual Joi and she feels like the most real character in the plot. She is a voice of reason, a love object and the lady in distress all at the same time. Gosling is a fine actor and holds his own against the ladies, up until the arrival of Harrison Ford in the last hour of the movie. Ford's Deckard is familiar from the first film. He wants to remain detached, he is very smart but also has some of the limitations of humans, and he has had three decades to drink all the whisky he wants. Ford manages to upstage everyone else in the film even though his screen time is very limited. His scenes with Leto have a James Bond quality as he is interrogated, but he does not have any bravado or fear to throw up as a defense, he simply has his own weariness to assure him that he will win out in the end. Ford seems physically formidable for his age and there are none of the acting crutches that he uses in his other performances here. He did not phone it in for this one.

If you treasure the first film than you will probably love this one as well. Once you get used to the bombastic electronic score from Hans Zimmer and Benjamin Wallfisch, you will be able to delight in the dense city backgrounds, stark farming landscapes and idiosyncratic technology of the future. It is a smart science fiction film with some good notions of what makes us human, but it is layered in a story that is murky and slow.
Posted by Richard Kirkham at 7:06 PM