It's January, so I'm ready for my annual dose of Liam Neeson kicking someone's ass. So today we saw this and he did it, the only problem is that it was my ass he kicked. This is a sad story about the worst thing that can happen to a kid. As it builds up to the climax, I became more and more effected by it. At first I thought I was withstanding the story pretty well but then I turn around and there is Mr. Neeson's voice, ready to help knock me down and remind me that I am a human being who is a big cupcake.

This is a story that seems like it should be familiar but it is told in a very unique way. As I mentioned, the arc of the narrative concerns the loss of a loved one and the young man that has to face this truth is struggling with a way to confront it. The Monster that comes is not friendly but in a strange way is very supportive. The story is direct but there are three specific moments when the monster tells a tale to young Conor. Much like A Christmas Carol, Conor is visited on separate occasions and each time he a story is shared with him. Buried inside of each tale is a lesson, but it is never a clear lesson and Conor finds the stories increasingly confounding to the task he has of finding a cure for his mother.

A third of the way into the film, Conor's Grandmother appears. She is played by Sigourney Weaver, using the slight British accent that she probably picked up in "The Year of Living Dangerously" or "Half Moon Street". The Grandmother is stern and foreboding in young Conors life. He sees the future that he despairs of in her and does not sense the warmth that he and his own mother have. Part of the story will have to manage that relationship more delicately. His father is an expatriate living in Los Angeles. He does not appear to be a practical lifeline even though he wants what is best for his son. Mom is played by Felicity Jones  and she is suitably beautiful and haggard as the path of her disease progresses. Louis MacDougal plays Connor and his most affecting scenes are with his Father, the bully who abuses him, and ultimately the two women who have and will dominate his life.

The real story here is a child trying desperately to reconcile himself with the loss of the most important person in his life. The Monster represents the turmoil and the tragedy that he is facing, but it never acts exactly the way you expect the story to go. Ultimately there is a turning point, and we can see that coming, but the path there is torturous and may leave some audience members a bit slack jawed. One of my favorite things about the film is that it contains some beautifully animated sequences that illustrate the tales being told. I suspect the water color paintings are based on the illustrations used in the book from which this film derives. Although containing some fairy tale elements, they are not really Disney friendly. Conor has to try to make sense of them and it is a final turn in the story that helps bring it all together. 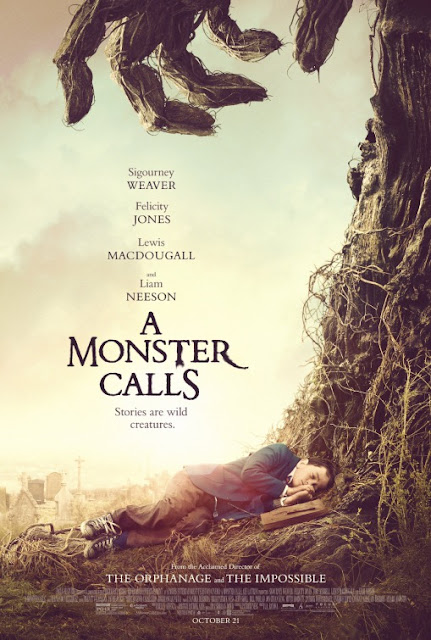 Neeson is the voice of the Monster but his image does appear in a photograph that suggests Conor's Mother in her childhood with her own father. Neeson has done voice work before. As Aslan (or God if you like) in the Chronicles of Narnia he was suitably ponderous. His two faced cop in the Lego Movie was just the right touch of sardonic indifference. In this film his voice is ferocious and soothing and sometimes harsh. In the end it is a comforting voice, maybe like all of our fathers, a bit scary at times but also a voice that we feel we can trust. Grief and guilt need to be met with a purposeful and supportive figure. Until Conor can find that in the adults around him, he has a Monster to call upon. This is a sad story that may be tough for children to endure as well as soft hearted adults. It is however a worthy drama and ultimately redemptive, but in a painful way.

Posted by Richard Kirkham at 6:40 PM