The Secret Life of Pets

Do you have a dog? Is there a cat sitting in your lap right now? Have you ever made bubble noises to a fish? If your answer to any of these questions is yes, than you will enjoy this film that speculates on how the other side of people pet relationships might feel about the connection. Ultimately, this movie is more for kids than I thought it would originally be, but it does pick out several of the things that we animal lovers believe about our friends and uses those to make us smile, laugh and worry.

I'm going to start with a cautious comparison here. The pets featured in this movie are much like the Toys featured in the Toy Story films. There is a major focus on how the humans relate to the subject of the film, and then there is a plot element about how the subject relates to other similar characters. Finally, there is a plot concerning the separation of the subject from it's human owner. Those are the basics of the story in the films I mentioned. The Toy Story films though, manage to build more heart and drama into their telling of the tale. Illumination Studio has created a nice design, and built in a number of gags to entertain us, but they miss the elusive spark that manages to make the Pixar films work so memorably [ at least most of the time].  This is a solid entertainment for certain, but it is not a classic that will be treasured by audiences down through the years.

We pet owners who have given voice to our furry and feathered and scaled pals over the years, both inside our heads and out loud, will have an easy time relating to this movie. Anthropomorphic conversations and interpretations of animal behavior are one of the delights in pet ownership. We get to project our own desires for the relationship onto the pet and there is basically no way we can be wrong. When an outcome is not as we predicted or wanted, we will come up with an internalized excuse and then put it in the mouth of our buddies. If that sounds like you, this movie will have a lot going for it. The main problem is that the humans disappear after the opening and only the animals remain. Instead of a thoughtful exploration of the connection that humans and pets make with one another, as last years Inside/Out did with families and our own feelings, we get an extended Road Runner cartoon. The plot is funny and manic and very entertaining, but it leaves all the nuance on the table.

Max is the star of the movie. He is a terrier voiced by Louie C.K., for the most part without any snark. When Duke, a oversized shaggy stray is interjected into his life, Max changes his demeanor in some ways and it looks like there will be an interesting story about the differences between animal and human nature to follow. What happens instead is that Max and Duke get thrown together in a buddy road comedy with a variety of complications tossed in. Both Max and Duke, voiced by Eric Stonestreet from Modern Family, seem like they are amiable dogs that have to resolve some differences. Those differences become mostly irrelevant when they are both pursued by animal and human antagonists, at which point, their behavior is basically interchangeable. 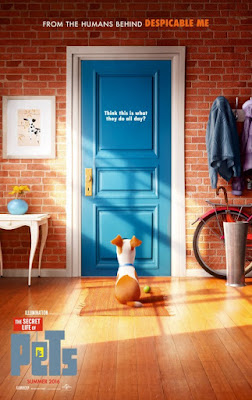 Kevin Hart provides the voice for a demented bunny and this is his third movie role this year and ninth in the last three years. The danger of over-exposure here is high, but since it is an animated character and the antics never have any sense of reality to them, his over the top manner is not really a problem for the movie. Albert Brooks is back in an animated film that is competing with his other animated film, "Finding Dory" this weekend. While not as egregious as last year's "Minions",  this movie does make repeated use of music cues from other films for the sake of getting the audience to connect emotionally with the story, rather than building a solid plot line. The one spot where it works effectively though, is in the sausage dream that the two main characters share, a better use of "We Go Together" from "Grease" cannot be imagined.

If you enjoy kids movies on their own, this is a peach of a film. If you are expecting something deeper, you may be disappointed but you will still be entertained. Don't let the fact that there is a "Minions" cartoon in front of this discourage you. "The Secret Life of Pets" may not rise to the level of "Despicable Me" but it sure as heck does not sink to the banality of that last film with the banana colored characters in overalls. If you have kids, definitely take them, if you are an adult, you can put this one off for a bit and not feel like you have been denied an important film, just like you skipped a candy bar that you would enjoy more at a later time.

Posted by Richard Kirkham at 3:43 PM

Sooooo glad to read this. My kids are wanting to see the film and I was a little apprehensive. Like you I was a bit concerned after their last picture. Now I feel a lot better and we may have a family movie outing tomorrow.

Oh yeah, the kids will like it. It won't irritate you, it's just not what it could be.

I was disappointed with this movie. The initial premise was intriguing but the film took a very generic path. It seems to be fine for the kids, but I wanted to like it a lot more than I did.

Sounds like we felt the same way about it. I wanted it to be more, but it is fine for what it does. Limited ambitions.