The conceit of this movie is that Sherlock Holmes was a real person and that his life of private consulting was well known due to the writings of Dr. Watson. There are movies made about him and and tourists flock to his supposed address and he is now 93 in 1947 England. From that premise we proceed into a personal mystery that Holmes is trying to unravel before his death. He is also plagued with senility that fogs his memory, much in the manner of early stage Alzheimer's disease. The character of Sherlock Holmes is in the public domain at this point. The estate of Conan Doyle controls ten stories but any person with enough creativity can invent and publish or produce a Holmes tale. That may account for why he has been one of the most widely portrayed fictional characters in cinema. This movie is sort of a coda to his adventures and it is primarily a vehicle for the amazing Sir Ian McKellen.

Many years ago, I heard a critic (Rod Lurie) refer to these English produced character pieces as "tea on the lawn pictures".  I understand completely the idea behind that description, so many films in this vain offer no action, subtle drama, and an overriding sense that the locations are the primary purpose for people watching this. Anyone hoping for McKellen to throw down like Gandalf or Magneto need not bother showing up for this film. It is languidly paced and beautifully composed and an intricate character study across a thirty year chasm in the life of the world's greatest detective. If you are willing to listen however, you will be rewarded by some clever dialogue, intricate plotting and an ultimately warm story of old age and regret. Oh, and that is not to mention a spectacular performance by a seasoned actor in a tailor made part.

Admittedly the quiet countryside and remote farm that Mr. Holmes now occupies will meet the criteria of a "tea on the lawn" movie. There are even several scenes involving the consumption of tea but they never take place out of doors so that label would be a misnomer. Holmes is trying desperately to halt his oncoming memory loss and restore enough of his powers of observation, to help him complete the true story of his last case. He is dissatisfied with the version told by Dr. Watson, and he knows that it must be wrong because there is no other logical way to explain his retirement from the practice of detective work thirty years earlier. As he tries to solve the mystery of that case, he is simultaneously working with the son of his housekeeper to preserve the apiary he keeps and discover what is causing an outbreak of deaths among the bee colony. At the start of the film it seemed unlikely that this would be an older mentor type of story but that is what it morphs into and that is when the story becomes emotionally involving. The partial details and slow reveal of the tale from original mystery from 1917 are not particularly compelling. That is because the story is dribbled out in small bits and we never get a chance to relate to anyone but Holmes as the information appears. When the plot becomes the subject of a manuscript that Holmes shares with young Roger, then we have the motivation to pay attention and appreciate the detective work.

The performance of Ian McKellen is truly excellent. It is easy to accept him as the sixtyish Holmes in the flashback parts of the story. He is in reality about half way between the two ages that he plays here. The younger version has the strong posture of an older but still vigorous man. His back is straight and his head is up. Simple make-up and hairstyle work add to the illusion of a younger man, and his manner is more forceful and articulate. As the much older 93 year old, McKellen gets the physical parts just right. He is slower in all things, his facial expressions often belie a humor that the younger version of himself would not approve of. Again the low key make up work is effective while being impalpable. This helps immensely with the drama as the sadness of lonely isolation has taken a toll on the main character. As a victim of increasing senility, his face needs to covey the kind of vacant expression of someone who is intellectually trapped inside a failing organ like the brain. Sir Ian is  very persuasive in conveying that tone. It is dangerous to make early predictions about awards at the end of the year, so many other delights await us, but it is highly likely that this will be another nominated performance for him.

Young Milo Parker is an effective foil for McKellen to sharpen his performance with. As Roger, Parker conveys the kind of sharp wit and openness to tutelage that an old Sherlock Holmes would need to stir himself. He is also quite believable as the somewhat truculent child of a war widow struggling to keep her and her son's heads above water after the war. The tension that comes from having to be nursemaid to the infirm old man when that is not really what she is being paid for makes the mother character seem unpleasant, when what she really is is desperate herself. I was happy to see Laura Linney in that part. She has worked so much in television recently that her absence from the big screen has been notable. She is all wound up temper and frustration through much of the film and when she gets a chance to release those emotions it does stir the drama up in the last act. I was also impressed with the music of Carter Burwell who has collaborated with director Bill Condon on several earlier films. I wonder if it was his work that is being played on the "glass armonica" featured in the story. 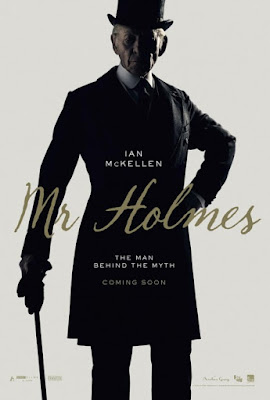 "Mr. Holmes" is a slow moving but very rewarding film. It will appeal to independent cinema fans of course but it looked to me from the audience that I saw it with that it is resonating with a different group. People over the age of fifty filled the theater today (personal disclaimer, that will include me). Everyone was very receptive to the film and there was a nice round of applause at the end of the movie. This is not a common occurrence in films, much less ones that attract a geriatric audience, but it is another indicator that there may be hope for this movie at awards time. The Academy is notoriously old and this demographic is served very well by this high quality production. I don't think my appreciation for this movie is simply a counter reaction to having to endure "Minions" and "Terminator Genysis" earlier this month. I simply think this is one of the best films I've seen this year.


Posted by Richard Kirkham at 7:47 PM

I really hope to see it this weekend. I was hooked after seeing the trailer. Fine review my friend.

You will enjoy it I'm sure. Sir Ian is worth the price of admission. Thanks for the thumbs up.