It's been a week since I saw this movie. I'm sorry about being late on the post, it has been a tough week here at KAMAD. We lost a four legged member of the family and while getting out of the house to a movie relieved some of the depression, I could just not find the enthusiasm to write. It will probably never stop hurting but I am a lot more functional a week later so I thought I better get to this before I gave up on it entirely. This is one of those rare films that come around now, a straight dramatic story driven by the performances of the stars. There are a few twists but none of them are "Gone Girl" head slams. The story set up is pretty simple. Professionally successful but personally screwed up hot shot lawyer Robert Downey Jr. gets word that his mother has passed away and he travels back to the home town he escaped from for her funeral. The town is not the only thing that he was running from, Hank also has been avoiding his father Joseph. A stern family man in Hank's memory and an iron willed judge for the community. While home and tentatively negotiating the troubled waters of his family, Hank is forced to stand up for his father who may have been involved in a deadly accident that was more than an accident.

Robert Duvall is "the Judge" and his relationship with his son Hank is the core of the movie. There is a mystery and a murder trial, but that is all in aid of forcing these two to confront the past and come to some form of detente while they still can. The two stars are as sharp as can be in their parts. Each plays the defensive victim and the recriminating accuser from time to time. While Downey has the biggest slice of dialogue and action, Duvall's character is the focus of the story. As the plot unfurls, we discover layers of character and story that give Joseph Palmer a lot more development than he gets from simply donning the robes of office. Legal dramas have played fast and loose with courtroom procedure since movies first started and this is no exception. Imagine if you had someone that you resented in the witness chair and you wanted to both protect them and at the same time uncover some personal history under oath. It would never play in a real court but on the set of a Hollywood drama, it is the kind of thing that justifies making the movie in the first place. The script is really not great. In fact, I swear I saw the same plot a couple of weeks ago in a comedy. A son returns home to deal with the death of a parent. Unresolved conflicts with siblings bubble to the surface, tension exists, a mentally challenged character utters wise things, an old girlfriend get tossed into the mix and issues of paternity and trust come up every few minutes. Just like the comedy "This is Where I leave You",there is another curve thrown at you almost to a five minute metronome. Just to be sure that it is taken dramatically, "The Judge" also throws in a tornado.

The supporting cast is also good. Vincent D'Onofrio is the big brother who has a tragic past and the burden of looking out for the family as a sandwich adult. His wife and kids are in the movie but I don't think they had any lines. Most of D'Onofrio's work is done non-verbally and he is best in those scenes where he shrugs his shoulders or looks at his brother with a meaningful glance. Vera Farmiga is the old girlfriend abandoned by Hank and now much more in control than she was twenty years earlier. Billy Bob Thornton can almost steal a movie with his eyebrows and he attempts it here. As the prosecutor going after "The Judge" he initially seems to be a malevolent force for Downey to overcome but as the trial plays out, he is a needed foil for the Judge and the son to be able to confront their demons. By the way Hollywood, more Billy Bob Thornton please.

The problems with the movie are the potboiler plot and the need to fit in several turns that give each of the lead actors some chances to shine. Downey gets to have a romantic clinch with Farmiga, that ends because he has questions and doubts that he is doing the right thing. His young daughter is used to give him the warmth that he lacks in any other aspect of the characters life. She also gives Duvall an opportunity to show the warmth that Hank always wished for but never felt he was getting from his dad. There is a traumatic scene in the bathroom as the ailing Judge fails to keep his secrets from his son because his body is failing him. The courtroom scene with Duvall on the stand and Downey asking questions is the lynchpin of the movie and it works well enough to keep us involved. When the Judge recalls the words that the dead man spoke to him, I personally would have been fine if Joseph Palmer had gone all Denzel on him. 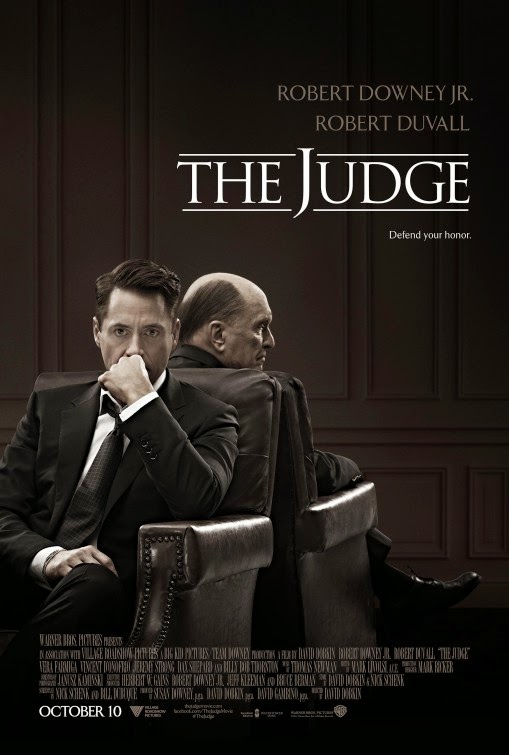 "The Judge" is a solid piece of entertainment that can't reach greatness because of the overblown plot and the cliche strewn story line. The actors in the film elevate it to slightly above average, but the performances themselves are also handicapped by a script that lays it on way too thick. So on the charge of being overly dramatic, I find "The Judge" guilty. I hereby sentence it to limited box office success and no awards season potential. It is not a bad film, but Downey and Duvall are accessories to cinematic excess that means that their chance to work together here is less successful than any movie fan would hope for.

Posted by Richard Kirkham at 7:56 PM