As the father of two girls, I approached this film with a great deal of trepidation. Although my kids are grown, I know what a horrible feeling it would be to have your children disappear. The nightmare that these two families face gets worse with every minute that the children are gone.  I was not sure that this would be the kind of film that I would be able to stomach. If you are a parent and wary of seeing this because it might hit too close to home, then you are better off skipping down to the next start time and seeing a good family film or a thriller where child abduction is not the starting point. In the long run the story will reveal it's secrets and there will be moments of redemption, but they come at a great cost.

Usually I avoid reading other reviews before I see a film, but this past week on the radio and on a podcast that I listen to, both viewers mentioned the same tell. They each generally liked the film but they said they knew who was responsible for the crime based on a well known trait of film making most recognizable on dramatic TV programs. (I won't tell you what the clue is because I don't want you to have the same issue that I did). As a result of hearing this info, I spent a chunk of the movie watching for the give away instead of just following the story. As it turns out, it did not matter because I did not recognize the an actor playing a key character and I was diverted from the tell at the beginning. After I settled down to watch the story unfold, I did find myself caught up in the details of the plot. It is a complicated set of events and the resolution follows some strong plotting techniques but also some typical movie shortcuts. There are a couple of glaring coincidences that help things move forward, but there are also so many side issues and red herrings that those contrivances do not matter much.

All of the advertising for the film has already revealed that the parents of the kidnapped children are willing to go to extreme lengths to try and find them. This raised some pretty tough moral issues and there are some scenes of brutality that are hard to take. We are spared the visualization of the process for the most part but we do get a lot of the after effects and it isn't pretty. Hugh Jackman's character is a self sufficient type, prepared for emergencies, able to provide for his family and the owner of his own business. His portrayal of a father pushed to the breaking point and pushing back is the strength of the story, but it is Jake Gyllenhaal's police detective that is the strength of the movie. Jackman's intensity is understandable from the beginning and he goes on full Wolverine mode at times to get what he wants. Detective Loki, is a different matter. As the story progresses he becomes less detached, more volatile and a lot more conflicted in his motivations. Gyllenhaal is impressive playing a completely different type of dogged determination than he played in "Zodiac" as a man obsessed with finding the identity of a killer. The script lets him down in a couple of places, but his work pulls us back into the story and away from the conventional tools that might unwrap the mystery.

The scenes where the two fathers pursue their own project to get information are solid but rarely a surprise. The false trails and secondary characters that seem to create a diversion are actually all cleverly tied into each other. I thought it was a very solid job of plotting. There are two outstanding "thrill" moments which occur as those threads are being unraveled and then some other moments of dramatic fireworks as well. It is unfortunate that the resolution does not have quite the same spark to it, although there is a much darker element and personality revealed. The personality of our heroes is shown in the most naked circumstances and this is where the redemption comes through for them. You have to have been paying attention to have it all make sense and there are still a couple of small bits of info that I would like clarified, but it was overall satisfying. 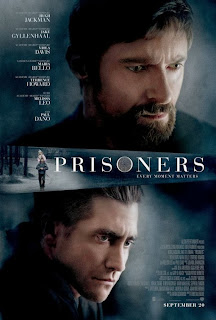 The other thing I heard talk of before I saw the movie was the running time. It is two and a half hours. Both of the commentators I happened across suggested that it could lose nearly an hour of run time. I did not notice that the story moved slowly. I think if the pace had been quicker, then there would be even more difficulty in making sense of the plot. This feels like an attempt at creating an original piece of story telling and not simply a programmer like those 1990s Paramount films that crammed plot, thrills and Ashley Judd into ninety minutes. I can't say it was perfect but I did think it worked very well and despite my hesitation over the subject matter, I was glad I saw it and I think most of you will be as well.
Posted by Richard Kirkham at 5:57 PM

I also was not too wild to see Prisoners since I have a baby boy, but at least they get the kidnapping out of the way in the first few minutes and don't make us wait for it. That is an intriguing 'clue' you refer to and probably is correct when it comes to this genre, but thankfully, I had no idea who did it until the reveal. Good review sir.

I'm to see this film soon. I'll come back when I do, Richard.

Charlie,I read your post earlier. I guess I liked it a bit better than you did. I left a comment for you there. I look forward to hearing back from you Michael. I thought it was solid.