This is what happens when you piss off the Hollywood establishment and the movie going public. You end up having to be in the vanguard of VOD distribution of your films. Mel Gibson was at one time the biggest star in the world. He was an Academy Award winning film maker whose personal vision stirred audiences and brought in box office, whether he was in front of the camera or behind it. His personal life has gotten out of control and it has bled over into his professional life. This is a tough action flick, done on an interesting and innovative setting, featuring a typically tough guy performance from the star. It did not play in theaters, it was viewable only as an on demand video order until this week when the film was released on blu ray and DVD.

The setting of the film is the notorious El Pueblito prison in Tijuana Mexico. Gibson's character (who never gives his real name) is thrown into this prison after a chase and being taken into custody by corrupt Mexican police. There is a lot of narration by "the driver" played by Mel, and he sums up the scene pretty quickly, it is "either a prison or the worst shopping mall in the world". The prison is not run by the government, it is run by the prisoners and the culture of survival is brutal. "Driver" is smart enough to steal some money to survive on in the prison but he needs help figuring out the ropes and planning his next moves. He ends up being aided by a ten year old kid, that's right a ten year old kid in the prison. That's because the prison works almost like a brutal commune without the traditional bars and prison cells. Many of the extras in the film actually did time in the real prison which was shut down in 2002. It is the nightmare scenario for any law abiding citizen to imagine, the worst of the worst crawl to the top of the food chain and exploit everyone else.

We never see the crime that the "driver" and his partner commit, we enter into the story as their getaway comes to an end. The sequences where Mel's character shows his improvisational criminal skills is entertaining but of course things always go more according to the script than they would in real life. There are two or three back stories based on the corruption of the system and an innocent in jeopardy who propels the actions of several of the characters. There are some pretty ugly things that we see in the movie, but for the most part they are part of the narrative rather than just a freak show to give us the creeps. In this way this movie accomplishes things that Oliver Stone's "Savages" misses. We get characters who we will care about, a mixture of plots that provide a satisfying revenge story and a couple of lead performances that feel like the actors were putting their all into it. Whatever you think of Mr. Gibson, he is a talented actor and the kid in the movie does a fine job living up to the role he has been cast in. 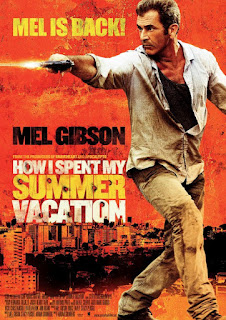 There is a funny sequence in the last quarter of the movie where the "driver" has to carry out an elaborate hoax in order to get to a particular criminal. It reprises some of those improvisational skills and requires a funny celebrity impersonation by Mel. There are two or three harrowing torture scenes and a couple of excellently staged shootouts in the prison itself. Apparently the film was shot in the actual location of the old prison, which means that the production designer on this film is not nearly the depraved mind we might be lead to believe. The look of the movie is dirty yellow with a skin of grime layered on top. The photography and lighting do a very good job at conveying an unpleasant part of the world in a pretty accurate way although sometimes it seems like these techniques are becoming a little cliched.

This is not a movie for the faint at heart and it may not be good for your stomach either. If you like a tough action movie, and are not bothered by Mel Gibson's personal problems, you will find an interesting story and a fascinating real world background in "Get the Gringo". The title is easier to say and remember then the original name for the movie was, but when you see the movie, the original title makes more sense.
Posted by Richard Kirkham at 11:22 PM