I have been away from a movie theater for two weeks and was beginning to feel very uncomfortable. There never was enough time or a product that I wanted to see in the last couple weeks, even though I was on a partial break during that time. This week however intrigued me because there is a highly talked about horror film, a schlocky rip off of Escape from New York, and a Three Stooges movie of all things. I expect to see the stupid action film sometime this weekend, and I can't decide if the Stooges movie is a good idea or not, although I have heard good things about it. So I choose the horror film because it was arriving with some fanfare and I wanted the visceral experience with a chill down my back. I have to say that I was a little disappointed.

Comedy and horror can go together and often do, heck see my previous post on Army of Darkness. The Cabin in the Woods has a self aware sensibility that suggests a "Scream" like twist on the horror genre. We are going to get our story deconstructed for us at the same time that all the thrills are happening. The main problem with this movie is that the backstory framing of the traditional "Cabin in the Woods" type story, undermines the horror effect in the traditional movie. I know we are supposed to be taken out of the film and look at it from the modernist perspective, but there needs to be a solid movie there to begin with, and everything feels off. There are some shreds of information dropped in on the first cast which lead to a little bit of suspicion, but by the time any of that is beginning to get percolated, more than half of our characters are dead and the ones remaining are viewed in a very diffident manner. I am trying to write my opinion without giving away too much, and that is exactly what the film makers did wrong. They gave up the twist before the traditional story gets going and the mundane approach that gives the second story it's humor, sucks the energy out of the horror version of the movie.

I will say there are a lot of laughs in the second story development and payoff. The subversion of the horror genre plays like an over the top episode of "Supernatural". Without Sam and Dean around to root for, there is not the kind of tension you need to make the jokes work as well. I liked many of the concepts. There is an extended joke with a speaker phone, and the elevator tour of the backstage horror factory was visually amusing most of the time. The mash-up of film horror genres was fun to watch for the twenty minutes or so that it was on, but the justification was tipped early and it simply seems silly rather than profound. If the characters in the main horror plot had been treated a little more creatively, then the second story resolution might seem more appropriate. As it was, there was not enough humor to compensate for a lack of horror. The creativity that comes with the inventive visual play on all other horror genres, get played for laughs in an ejaculation of visual jokes that leaves you wishing the experience had not been over so quickly.

The movie does have three secret weapons at it's disposal. Bradley Whitford and Richard Jenkins are front and center the whole movie. They come across like a more normal version of Jules and Vincent from "Pulp Fiction". They have mundane verbal sparring and gossip, interspersed with flashes of dramatic action. As good as the actors are, they can't overcome the script that makes them nothing more than sad cases of arrested development doing a serious job. The self assured manner of their decision making reflects the hubris that comes from self delusional self confidence. They have this in spades and it works for the first part of the movie, but during the climax, it makes everything happening seem as if it is just a joke and the story undercuts the drama that it was trying to produce. I don't want to say anything about the third actor in the movie that adds a touch of "special" to the face of this project. Almost like the Bill Murray cameo in another horror flick a couple of years ago, this appearance generates a chuckle and some satisfaction in part because it was not expected.

Clearly there was a lot of creative energy put into the film. The idea is a good one but it needs to come off perfectly to work. It only came off adequately, so instead of the drop your jaw kind of awesomeness I was hoping for, I got the mildly amused chortle that comes with a good but not great joke. I wanted to be frightened but I was not, I wanted to laugh but I only giggled. I wanted to shout the praises of this movie to all my friends and readers, but I can only say it was OK. If you never see this movie, it will not be a huge loss in your movie life. If you do see the movie, you will be mildly amused for a couple of hours and then wonder what it was that just did not work. You at least now know what my theory on that is. 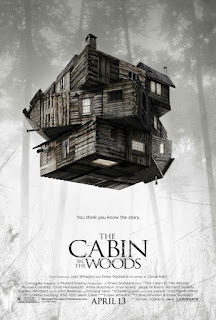 Posted by Richard Kirkham at 4:40 PM