The Woman in Black

So when we saw this trailer months ago, it got me going immediately. I like a ghost story that is Gothic and creepy without a lot of actual violence. If it is told in a suspenseful way, it can give you some goosebumps for a couple of hours and a jolt to make it all pay off. The last really excellent ghost story I remember seeing was "The Others", and before that "The Sixth Sense". When the story is right and the actors are up to it, a movie that tries to chill you with your own imagination and a bit of visual prompting is a lot of fun. "The Woman in Black" is not up to the standards of those last two films I mentioned, but it does give you the right amount of tension and a couple of very creepy moments. 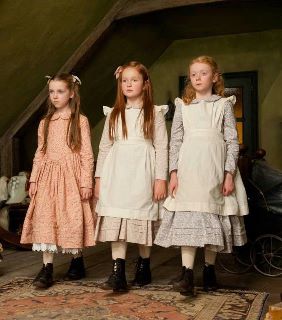 From the beginning of the movie, you know this is not going to be right. For some reason that Stanley Kubrick discovered back in 1980, little girls dressed in old fashioned clothes and playing silently, freaks people out. The dolls these kids have would give you nightmares, without even adding the things that happen afterwards. Later there are images of toys that seem otherworldly and ominous, even though they are supposed to be charming and amusing. Like little girls in old fashioned clothes, monkeys just bug. My daughter Allison would not like this movie at all because it has the creepy monkey toys and some clown like images. That's all she needs to know this is not her cup of horror tea. Give her Zombies and Aliens and she is fine, but werewolves and ghosts do not go down as smoothly. Amanda on the other hand decided she could not wait to accompany me on my birthday trip to the movies, and she watched eighty percent of the film from behind her hands and the flap of her jacket as she pulled it across her face.

Daniel Radcliffe is trying to make the leap from Harry Potter to regular movie actor and he does a fine job with this film. He is the main character and is featured far more than any other element in the movie. I thought he was a little young to be playing the part of a widowed father of a four year old, but once the story got going and the scenario was set up, I did not think about his youthful appearance again, I merely saw him as the character that he was playing. Early turn of the twentieth century English lawyer, handling the estate with a spooky reputation, calls for a demeanor that is serious but also open to the world of the paranormal. So maybe it is not that big a jump for Mr. Radcliffe. Anyway, I thought he was fine and sold the fear and dread very well.

Much of the credit for the suspense in the movie must go to the set designer and the musical score. While the cobwebs sometimes seem cliched, the dark corners of the mansion, the weird furniture and the horrifying toys and letters create a mystery and discomfort that fits exactly with the tone of the story. The score is sparse and quiet with only occasional bursts of energy designed to goose up our reactions. Most of the time the music sets the stage in a low key manner that is not tuneful but rather mournful. There are some good optical effects to tingle the nerves but they never go too far in making the spirits anything other than ephemeral. While there are the usual jumps, quick cuts and flashes to shock us, they are timed well enough that even though we know they are coming, they usually work. 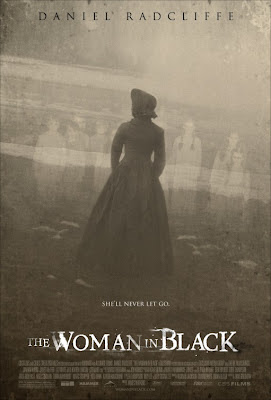 What flaws exist in the story have to do with the complicated back story and the attempt to resolve that story that seems to come out of nowhere. Near the end of the tale, a deadline suddenly looms, and our protagonist needs to find a solution for the haunting in a timely manner. The theory seemed rushed and the actions that follow are mostly out of character because of the quick time limit that arrives. Like all good ghost stories there is also a kicker, and here it grows out of the back story and shows how manipulated we were by the attorney's fight to put a spirit to rest. You will not have a huge number of surprises but there will be an acceptable amount of shrieks to make this a good date movie, that will not simply be remembered as "Harry Potter and the Haunted Mansion".
Posted by Richard Kirkham at 8:46 PM