Too Tired right now for the full post. I will get to it tomorrow. Preview though "Very Good".

OK, I'm still tired but I need to get this done. I did not read any of the original books that this movie is based on but I have watched all three of the Swedish language films made from the series. The story was excellent and it is quite intricate. I found that I was able to follow the Swedish language version more clearly than this English language remake. It may have been that the sub-titles force you to pay more attention to details than a passive listener is likely to do. There are elements to this story that require the setting in Sweden, so the new version basically is the same movie done with international stars,but shot pretty much in the same locations as the Swedish language version. Production values are also a bit higher.

This is a dark and disturbing story. There are ideas and sequences in the film that are likely to haunt me the rest of my life. There is a brutal rape scene that was horrifying in both versions of the movie. This current version struck me as less explicit in the visual aspect of the sequence but stronger in the sound design and the acting. The retribution segment that is a follow up may seem less terrible simply because I knew what was coming. It is a comeuppance that is earned but is nearly as brutal as the act that inspired it. This post seems to be focusing on comparisons between the two movies, I suppose that is inevitable, but I don't want to ignore those things that are unique to this particular movie.

Since I have been a James Bond fan all my life, title sequences are like manna to me. The Maurice Binder work on the Bond films was my introduction to titles. Earlier this week I saw a great opening title sequence in "The Adventures of Tin Tin", this is the second title sequence this week that is noteworthy. The music you hear in the teaser trailer is used in the titles. The Led Zeppelin "Immigrant Song" actually build some tension and lets the audience know that this will be an unusual story we are about to see. The images are artistic visuals using black oil covered props, faces and human forms. We get a good idea from this that there are dark things coming in the next couple of hours.

I don't know the actor from the Swedish version of the film but he was perfectly fine, I thought however that Daniel Craig was much more effective at playing a conflicted investigator. I was impressed by him in a sequence in the movie where he is in substantial danger. In the Bond character he plays, even when at the mercy of the bad guy, he comes across as tough. In this story he is not tough, he is defeated and you can see the expression on his face that another character is referring to at the time. It was a solid piece of acting. The actress from the Swedish version was solid, but I thought her performance weakened over the course of the other films. I don't know how Mara Rooney will do in the subsequent versions should they choose to make them, but I think she is going to be pretty huge after this. She nails the character and makes us understand that there is anger in her but also a good deal of insanity. The end of the story as it is shown here, steals her potential breakthrough, although in the long run it is necessary for the other movies to work

The director David Fincher has done a couple of movies that I like really well and a couple of films that I can't stand(Alien 3 and Fight Club could disappear and I would not shed a tear). "Zodiac" was the best film of it's year but was largely ignored. He gets the creep factor up in two or three places and sustains it. The Girl with the Dragon Tattoo, needs that sort of suspense and creepiness, and it shows up in a couple of places, including the climatic revelation of the murder mystery. My memory was that there was a very limited sexual relationship in the Swedish film and it is more extended in the new version. I think that works at deepening the relationship between the two main characters but also showing the seeds of resentment that are going to be a part of the next couple of features, so for me this is a plus for this version. They made a commitment to extending the movie past the place that the mystery of the story is resolved. It is all set up for what comes next, the last twenty minutes of this movie were the first twenty minutes of the second of the Swedish films. This section was not as clear as in needed to be and it makes the film sag at the climax instead of sing.

It is hard to say that the movie is entertaining since it goes so many dark places. It was exciting and suspenseful and well crafted. I think the story telling in the original Swedish film was stronger but the acting and production here is better. I do think that there was a lot of honesty in the promo used in the teaser, "The Feel Bad Movie of Christmas". The images and ideas are hanging around my head, and I don't know that I like it, but I do know that the film worked because it left me with those feelings. 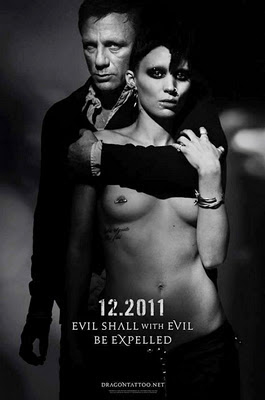 Posted by Richard Kirkham at 9:26 PM

The original Swedish version is one of the best films I've seen this decade and I refuse to stain that opinion by having anything to do with David Fincher's version.

I think I read that the Movie rights for the English language version were already sold before the Swedish films came out. There are many shabby English language versions of films that miss the mark or as you say, "stain", the legacy of the original. "Shall We Dance?', "Eat Drink, Man, Woman" and "The Vanishing" are three that come to mind.

There are English remakes that are as good and in some ways superior to the Originals. "The Magnificent Seven, "The Departed", and "Insomnia" all come to mind. I understand the need to use a great Idea because it is a great idea and there is a market. You are right that sometimes the subtitle are the only reason that a movie is remade, but it can work. From this last year we got "Let Me In" which I think built suspense and character much more effectively than the Swedish version, and the main reason it was made was for the English Language Market.

I don't think the Fincher version will sully your memory of the Originals, but you are smart to follow your instincts with most movies. When I know something intrigues me regardless of what others say, I still want to see it, and conversely nothing could make me see some films that I just know will tick me off.