This is easy to take care of right off the bat. This film is in no way equal to the fantastic John Carpenter Film that it claims to be a prequel to. The Carpenter version was a classic of macho paranoia, biological creepiness and shock value all tied up in a self contained world without any outside intrusions. This movie starts someplace not anywhere near Antarctica, and continuously suggests that the occupants of the science station can leave at any point and can expect help at any point. The suspense ends up coming from whether or not they figure out they should isolate themselves rather than the isolation being imposed on them. This changes the tone for a lot of the movie and sucks out the elements that made the 82' film so much better.

I have read some nasty reviews of this movie. One of them referred to it as a steaming pile, so you know going in that there are geeks out there who hated it. That may have lowered my expectations enough for me to get some enjoyment out of the movie. There were actually a couple of things here that were pretty clever, but there is also a whole lot that is missing. Let me start with the one thing I thought worked really well at using a different twist on discovering who is real and who is "The Thing". A basic biological tell is provided that never was used in the earlier movie. It is simple and very logical. It is also only partially accurate which means we will get a chance for more doubt to build in and for our suspicions to run wild. Unfortunately, as soon as we get to a point where people are being separated out, an attack takes place that renders the need to do that divion much less meaningful.

This is the main problem with this "remake/prequel", it goes for action more than suspense and for horror more than fright. CGI technology allows the film makers to envision horrorific images of the monster in tranforming into human shape or something else. What they then do is repeatedly use that ability to show us something new and awful. Most of the time the new horror image simply jumps and attacks, and there is not much chance for us to resond to what has happened to one of our protaganists. There is one character that provides a little humor and we can have some sympathy for him, but the changes are so quick and there are so many of them that our emotions do not get a chance to settle in and appreciate the ick factor that the visuals are supposeed to be making us have. 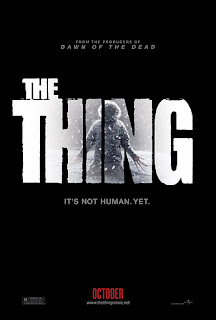 All of the attack stuff in the Carpenter version comes late in the film, after we have developed an understanding of the characters and the situation. Here all of the attacks start early, they happen without much reason and the characters that are victimized are barely distinct from one another, much less fully formed people that would matter to us. This is not the fault of the actors, it is the script. The one character that we see as being a pig headed idiot, turns into a pig headed monster and we barely care. The herione fights back but is using tools that don't make much sense for the set up. There is an involved climax in the alien ship that feels completely unnecssary and turns the film into a peek a boo chase sequence. The storytelling problem I see is that most of the time our heros are running away. They are reactive to the Thing, they do not seem like they are anything more than the screaming girl in the woods trying to escape in any number of traditional slasher films.

The lead actor is the guy from Warrior that I liked so much last month. Here he has very little presence, and he is much more interesting than anyone else on screen. The one character that crries over into the other film is set up pretty well bu disappears for the last half of this. There is a n ok transition to the opening of the earlier movie, but it does not sell what happens during this film any more. This movie is destined to live in the shadow of the Carpenter film. I know how much better the 82' film was, because the only two chills I got in this movie were musical cues from Morricone's score from thirty years ago.
Posted by Richard Kirkham at 7:43 PM

Richard, please tell me you didn't actually PAY to see this???

I am ashamed to say I did. I knew it was going to blow but I had to see. It was like a car accident, you need to know what is going on.