If anybody was holding their breath because they were worried about this film, you can let it out now. "Thor: Ragnarok" is as good as promised and entertaining as hell.  I keep hearing how it is the shortest of the Marvel Films, but it did not feel to me like it was shorting us on anything. We got an expansion of the Asgardian Universe, there are significant connections to the rest of the Marvel Cinematic Universe and "the Avengers" get to play a little in this sandbox as well. It may not be essential to the progress of the phases of the Marvel plan, but it is a solid stand-alone with enough Easter Eggs to keep the faithful happy.

I want to start with something that is usually a side-note or an endcap to most film reviews, the use of source music. Whatever they paid for the use of the Led Zeppelin "Immigrant Song", it is worth twice that. You almost certainly heard it in the teaser trailer and you know the hypnotic effect it can have when combined with images from the film. In the movie itself, the tune gets used in two places and each one is just perfect. It works the way the "Mission Impossible" theme does, it underlies the mythos  of Thor, it accentuates the mood and it tells us that a moment of heroic action is on the way. Zeppelin may have been finished since 1980, but the songs have continued to transfix listeners for almost 40 years since they left the stage, with this use of the tune, they will safely be around for forty more years. There is one other tune that gets used in a slightly different spot. It has not been advertised so I won't spoil it for you, but if you don't laugh out loud when it comes up, you are either without a sense of humor, or you were never a child of the seventies.

Since we are on issues not related so much to the plot, let me explain how valuable a second investment the makers of these movies chose that pays off in spades. The Grandmaster is not an essential character in the Cinematic Universe, but he is essential to the humor in this film. It may be that any movie without Jeff Goldblum in it will never seem funny by comparison. You "Jurassic Park" fans will smile with every line reading. It is as if the funny parts of Ian Malcom were transplanted onto this alien being who has control of a trash planet and uses his power for evil. His line readings are incredibly arch and dry. Goldblum's facial expressions match the vocal performance with the same kind of wit, it is never over the top but rather pitch perfect for the brief moment we are given it.

Cate Blanchett is Hela, the villainess of the film. Her character has a more reasonable explanation for existence than most of the similar female antagonists in these kinds of films do ( see "The Mummy" or "Suicide Squad for examples). In the big scheme of things, Hela turns out to be a one off for this story, but she was an exceptionally effective one off. Taika Waititi is a director that I am not familiar with although his two prior films have lots of admirers, I've yet to see either one of them. He deploys Blanchett in small doses and lets her actually act in some of the scenes rather than simply pose, but she does also get to pose. If the three point stance of a super-hero is now a trope, the slow motion turn of a villain must be as well, and it is used here regularly.

The relationship of Chris Hemsworth's Thor to Tom Hiddlestons Loki, continues to be the thread that holds the line of films together. The characters have grown enough to be interesting, Thor is still arrogant, but he is wiser and his humor is much more self effacing than in previous installments. Loki doesn't change so much as he does adjust to circumstances. We can almost always count on him to betray his brother, but we can also now see that he understands how important it is to have someone to betray. It is an amusing conundrum. The two actors play off of each other really well. When you throw in Mark Ruffalo as Bruce Banner/The Hulk, it gets even better. At one point Thor gets the treatment that Loki did in "The Avengers" and the smirk of satisfaction on Hiddleston's face is great. 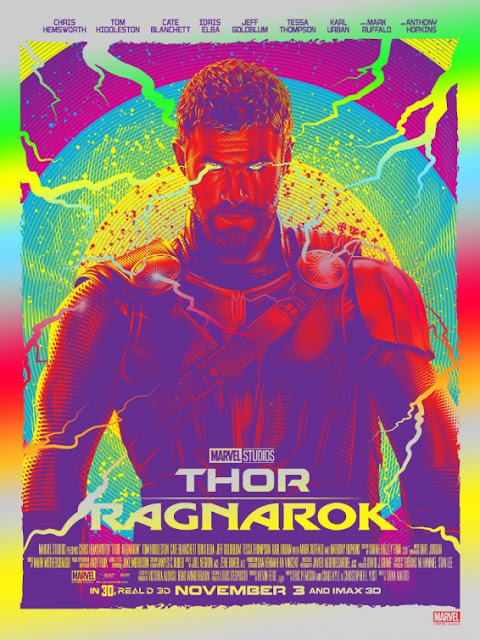 Earlier this year we got Chris Pine in "Wonder Woman", this film has a feature role for Karl Urban. Now we somehow have to get Zachery Quinto into one of these super hero stories so that all the main cast of the "Star Trek" films can point to a comic book movie on their resume. I did not recognize Urban at first but I did know that the actor in the part was much better than the part first appeared to require. As the film went on, there was more to it and suddenly we see why you needed an actor like Urban. Anthony Hopkins appears to finish off his role as Odin, the father of the main characters, and a figure of stature that seems to embody the idea of real Gods. He is used sparingly, but just his visage matters in the later parts of the story.

"Thor: Ragnarok" is funny as heck, with a couple of subplots that pay off in the end. I don't see a huge tie in to the whole Marvel Universe but maybe I was laughing to hard to notice some of the connections. It feels like a seventies psychedelic comic book has come to life. The colors and characters will keep you amused and the story is just about as solid as you can get for a non-Avengers Avengers movie. It's hard to think of this film as being part of the same world as the Spiderman film we got earlier this year, except someone clearly remembers  that the word "Comic" implies funny.

Posted by Richard Kirkham at 10:08 AM