Two days ago, on Friday morning, I went to see this film. I usually post my thoughts immediately following a movie experience because I want the story and impact to be fresh in my head while I am writing about it. Once in a while, when the movie is late, I will wait until the next day. I have put this off for 72 hours because the subject matter involves a young woman with a severe infection and a life threatening hospitalization. On Saturday, I attended a memorial service for a young woman who had a severe infection and did not make it. I had not realized how the movie was going to play out before I went in or I might ave waited a little longer to see it. The timing as a result was awkward and my emotions were clouded with the personal turmoil I was going through. I know that the story is not the same but some of the similarities made it feel awkward to watch this as the comedic experience it is intended to be. With this declaration now out there, I think I can share my impression in a more honest way and you the reader will be able to judge if I am being fair in either direction.

This is a romantic comedy, a genre that usually has little respect among film bloggers because of the dependence on certain tropes in story telling. "The Big Sick" will not be guilty of any of those, except in the most general sense that it is a love story with several twists. The turns this movie makes though feel fresh and while the end plays out as if it was any other rom-com, the middle is decidedly different. There are three reasons that this movie fits into a class of films higher than most movies of this type. To begin with, there is a different type of culture clash. Plenty of romances feature people from different backgrounds and the misunderstandings and complications that can arise from that. Two solid examples of those types of films would be "Mystic Pizza" and "My Big Fat Greek Wedding".  "The Big Sick" has a cultural story behind it, but it is not about the romantic partners fitting in with one anothers in-group, it is the inability of one person in the relationship to be able to resolve the distancing that he must go through for both his family culture and his romantic /professional culture. Kumail Nanjinai plays himself. He is a comedian, struggling to make it in Chicago. He is also a Pakistani-American, which puts him in "the other" classification to some audiences and probably some of his friends as well. He engages in the family traditions of sharing a weekly meal, Muslim prayers and potential arranged marriage, all to please his family and maintain those cultural norms. Kumail is not serious about his faith and is largely just indulging his parents when they bring attractive Pakistani women to the weekly meals. He knows he is rapidly becoming an out member of his own group when he starts dating a white woman from a much more traditional background. There is quite a bit of funny stuff in the balancing act he is playing with his family. His stand up to me seemed to me marginally better than his pathetic room mate, but it is not clear how he will be able to make his very humorous personality come out in a stand up performance. All of his best lines are delivered to the girl that he is falling for.

A second reason that the film is different enough from most others in the genre is that the complication that separates the two lovers is not merely the culture clash but the medical crisis that I was a little sensitive about. There are some dramatic turns that occur during the middle of the film that I was unprepared for. The girl is played by Zoe Kazan, who I loved so much in the film "What If ?' back in 2014. Emily is a bright girl with a great sense of humor, but she is wounded by Kamail and that is the consequence of the cultural issue I already mentioned. Kamail however steps back into the relationship in a one sided manner. I don't like giving the story away, let's just say that a coma is not automatically a plot device that you would think up for this kind of film ("While You Were Sleeping" excepted).  When Emily's parents enter the story there are several more directions the film takes. There is something compelling about watching awkward comedy situations. I know several people who hate films based on awkwardness but it feels very honest at times and when a performer is at the center of an awkward moment it seems even more tangible. Holly Hunter and Ray Romano are very good as the parents of the girl Kamail has broken up. Handling the circumstances forces Kamail to be less than forthright at times and the parents are very direct. [If you are looking for sleeper picks for your supporting actor nomination pools at the end of the year, keep these two in mind, they are great.] I probably did not respond as strongly to some of what happens here because of the context I mentioned in the opening. Hospitals to me are inherently unfunny, and with personal experiences floating in your head, it's possible to miss the comedy that comes from some tragedies. [You know the formula "Tragedy + Time =Comedy", I think I needed a little more time.]

Last on my list of reasons this film is able to overcome the burdens shared by most romantic comedies is that the line to the resolution is not a straight one. A conventional film would have used a moment from near the end of the medical situation to wrap things up. This film is different. The main character is defiant of the consequences his family wants to impose on him. He fails at the chance he has to make it to the comedy festival that could change the trajectory of his career, and his romance seems to have fizzled out. It's the little bit of extra effort in the third act that makes the movie work. It still comes out the way we want it to, but the road is not as smooth and easy as it could have been if done in a more conventional manner. 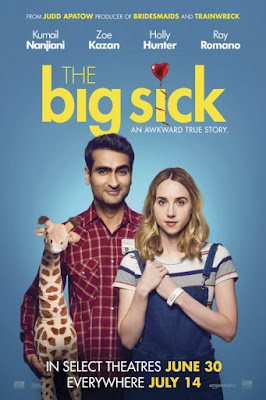 You are probably aware that this movie has received glowing reviews and high ratings on meta-critic sites. It deserves that recognition but don't be mislead into believing that this film is transformative or experimental. "The Big Sick" is certainly inventive, and there are distinct twists in the story that make it memorable but at the end of the day, it is an entertainment. I know that it is based on a real experience, but my guess is that the real life incidents were closer to the things we want to avoid than the things this film wants us to embrace. Think of films like "The Full Monty", "Little Miss Sunshine" and "Juno", and you will have a pretty good idea of where this is going. It is genre bending and innovative, but beware the hyperbole.

Posted by Richard Kirkham at 2:55 PM