What looks like is going to be a Gothic horror set in the Civil War period, turns out to be a psycho-sexual drama with a slightly demented finish. I was not fooled by the trailer or other marketing, because I'd seen the original version of the story from 1971. There are a few changes in the film which were supposed to alter the perspective from the soldiers point of view to that of the women in the story. I guess that would be the justification for remaking a film that was not particularly compelling the first time out. Let's just say for the moment that they may have altered the perspective some but they have not overcome the issue of the film lacking a need to exist in the first place.

Sophia Coppola is a director that many admire but I have found most of the films by her, that I have seen, to be cold and disengaging. They are beautifully shot and "The Beguiled" is certainly beautiful. Set in Virginia during the last year of the War between the States, the story concerns a wounded Union soldier taken in by a girls academy. The school is run by matron southerner Nicole Kidman. She is assisted by a younger woman played by Kirsten Dunst and they are in charge of five young women and girls who are being educated in a traditional form for young ladies. As they learn French and penmanship and sewing skills, their life is disrupted by the war around them. The introduction of Corporal McBurney (a solid Colin Farrell) into their island  of antebellum etiquette throws things into a tizzy. Since it is a Sophia Coppola film however, it is done at a languishing pace with each frame posed as if it were a still life being painted for the wall of another plantation.

The pacing of the story is so agonizingly slow, but still interesting, because of the mores and cultural rules the people of that time operate in. Even when he is being chastised by Kidman,  the dialogue between the two consists of polite and well thought out vocabulary. The inflections and tones contain the reprimands more than any word does. McBurney slowly courts the Dunst character and again it is done in a manner reflecting the times. In the original film, Clint Eastwood is much more clearly manipulative and he is wooing multiple women simultaneously. Farrell's version of the character seems sincere in his approach to Edwina, but Kidman's Miss Martha is also drawn to him and Elle fanning as the recalcitrant Alicia is the most brazen of the girls who have sexualized the Corporal in their heads. The little girls are fascinated by him as well but it is his Irish Charm and status as a Union soldier that holds their interest. As the story gets closer to the dramatic elements, it feels like it wakes up in a burst of energy and tries to accomplish everything the movie set up in the first ninety minutes in a two minute segment. There is a betrayal on a couple of levels, but those come rapidly and are followed by a resolution that seems to have been arrived at capriciously. The film feels like it is missing the second act.

Farrell and Dunst are the two standout performances. They are tentative and then passionate and frustrated and anguished in very effective moments. Kidman seems a little miscast. She is older but certainly desirable rather than repressed and desperate. Her delicate bathing of Farrell when he first arrives was the strongest part of her performance but in the manner she shows herself during the rest of the film, she feels a little stiff. The biggest unpleasant surprise from the actors comes from Elle fanning, an actress that i thought was special in  Super 8, but here she looks like she is play acting and although she is an aggressive flirt, she does not give off the impression of lustfulness that would justify the Corporal's behavior. 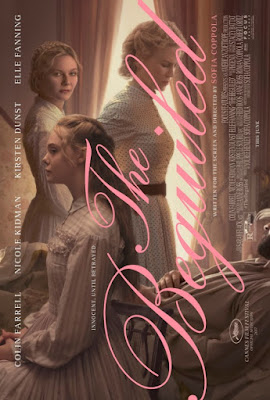 The only way I see this film as being a more feminist version of the original is that only one of the women completely falls under the sexual power of the man, and he is the one who is manipulated by two of the other women. That's about it. This is a good film but not a great one. It retells the original story but without much justification for doing so. It also makes the languid pace of the original seem frenetic by comparison.  The only music in the film occurs on screen when the girls are singing or performing, with the exception of an occasional synthesizer note held for a long period as a prelude to a couple of moments near the end. That may be another reason the fil feels longer than it should, without a melody it feels plodding. This is a film for Coppola Completists  or someone who has missed the original and has already seen everything else playing. I am largely indifferent on it.

Posted by Richard Kirkham at 12:39 PM